Analog Devices rolled out a battery management chip with an integrated fuel gauge, battery charger, and protection for single-cell lithium-ion and lithium-polymer batteries in a wide range of consumer devices.

The analog semiconductor giant said it improved how accurately the chip measures the remaining state of charge (SOC) of battery cells and how accurately it can replenish them. Analog Devices said the MAX17330 brings longer battery runtimes for consumer gadgets from wireless headphones and wearables to foldable phones and other dual-screen devices.

Battery management ICs carefully regulatevoltage, current, and temperature to keep the battery from wastingprecious energy and protect them from damage or losing capacity prematurely.The chips also directly affect the device's runtime, not only for a singlecharge but also over the battery's lifespan, which loses capacity throughconstant use. The MAX17330 regulates charging by modulating the charge FET.

An inaccurate voltage can cause overcharging,potentially damaging the battery cell, prematurely sapping its capacity, orcausing the volatile substances in the battery to overheat or, possibly even, erupt in flames. Underchargingcan also devastate batteries in consumer devices because it can reduce their useful life.

To help prolong the battery's life and protect it from permanent harm,companies usually add buffers that act as upper and lower limits on the stateof charge. For instance, if you use a battery management IC that is only 5% accurate, the cell can only be charged up to 95% anddischarged to 5% to guarantee the cell is never inadvertently overcharged or undercharged. Replenishingthe battery to 99% or more could lead to a failure, and depleting it to 1% or lesscould damage the cells in ways that are impossible to undo, reducing capacity. But in this example, these "margins" leavearound 10% of unusable battery capacity on the table.

If you can measure the battery's state of charge and then charge it more accurately, you can safely reduce the margins, giving the smartphone or other device more usable capacity. That ends up increasing runtime. 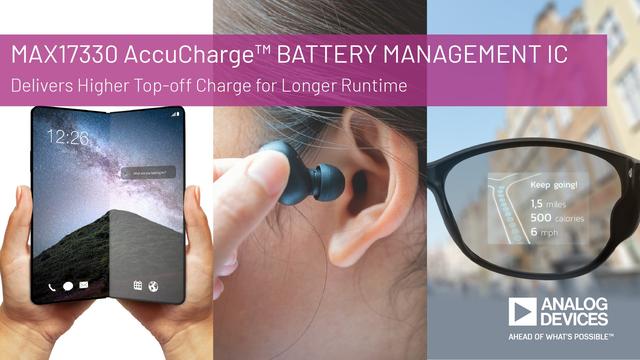 Analog Devices said the integrated fuel gaugecan measure the state of charge up to 40% more accurately than its previous generation. The chip takes cell aging, temperature, and dischargerate into account while reporting the state of charge in milliampere-hours (mAh) orpercentage in a range of operating conditions. The chip not only reports voltage,but it can also serve as a coulomb counter to measure the cell's current.

Analog Devices said that it supports 20% more accurate charging than its previous generation. To make sure the battery cell is as full as possible, the MAX17330 supports a greater "top-off" charge that pumps additional current into the cell on top of the primary charging cycle, allowing the battery to last longer per charge.

The chip pumps out charging currents of 1mA to 500mA with 1%accuracy from a 5V power supply to refill the battery cells in wireless headphones, medical or fitness devices, and other space-constrained gadgets. Analog Devices said that it also delivers a configurable charge voltage of 3.6V to 4.8V with0.2% accuracy.

The battery management chip can also be attached to battery packs of more than 1000 mA, with several cells that are physically separated to better distribute their weight. These types of batteries are frequently used in foldable smartphones, tablets, or other dual-screen devices as well as augmented reality glasses.

That poses unique challenges whilecharging, as both sides of the battery can have unequal impedances and differentcapacities and initial states. Analog Devices said the new chip can address the challenge by independently charging the cells. It also prevents cross-charging for these types of batteries and reduces dropout. Other improvements in the battery management IC help keep devices cool by dampening heat.

The chip also contains safeguards against over-and under-voltage, over-current, short-circuit, over- and under-temperature, and overcharge conditions. Using the high-side FETs, the chip supports self-discharge protection to keep the battery within safe conditions that prolong the life of the cell. The chip can withstand sudden surges involtage or short-circuits that can have harsh consequences on the battery cell's health.

Another feature is that it can monitor internal cell self-discharge hazards, according to Analog Devices.

The chip is not power-hungry itself.The chip only consumes 28µA while active and 21 µA while hibernating. With the FETs disabled and the system shut down, it only expends a maximum of 0.5 µA, the vendor said.

Russia says it has written guarantees on Iran nuclear deal