Are 500,000 Public Chargers The Answer To America’s Need For More Electric Cars?

The Biden plan to get millions of electric cars on America’s roads includes a proposal to install a half million Level 2 and Level 3 chargers in cities, in rural areas, and along major highways. New York City this past week also announced a plan to install almost 50,000 public chargers — 40,000 Level 2 and 6,000 Level 3 — across the city’s 5 boroughs. Many of them will be located in the city’s municipal parking lots and along some city streets.

Writing for Vice, Aaron Gordon says the Biden plan is the wrong answers to the wrong questions. “Experts and industry leaders say the U.S. needs to build hundreds of thousands of EV chargers to assuage range anxiety concerns. But it’s far from clear that would work, or that it’s even necessary,” he writes.

The point Gordon says many people miss is that electric cars are not like conventional cars! They have one advantage gas- and diesel-powered cars do not — they can charge at home. D’oh! In fact, Gordon says, he is “worried that the idea of simply replicating America’s gas stations, but as EV charging stations instead, is becoming an unnecessary and expensive distraction from the very real infrastructure we need to accommodate widespread EV adoption.”

“At its core, installing hundreds of thousands of new public chargers over the coming years is assuming old infrastructure needs for new technology. People think cars need gas pumps, and public fast chargers are the EV’s equivalent of a gas pump. Therefore, the thinking goes, we probably need lots of charging stations if they’re going to replace gas cars. But it’s far from clear this is true, because EVs are not like gas cars in one crucial way. They can typically be charged conveniently and easily at home overnight like a cell phone.”

That difference needs to be emphasized by manufacturers and dealers, he says. We don’t drive across town to recharge our smartphones at an Apple of a T-Mobile store, so why would we go out of our way to find a public charger when the vast majority of our charging needs are taken care of at home? Gordon acknowledges that apartment and condo dwellers need help finding a place to charge electric cars but thinks incentivizing building owners to add charging equipment would be more cost effective than replacing every gas pump with an EV charger.

How did the idea that America needs 500,000 chargers come about? (The Biden plan originally was for 1 million of them). “It’s important to understand how we got to the current consensus that we need 500,000 or a million chargers to begin with,” Gordon says. “This argument is best encapsulated by what Asad Hussain, a senior analyst at PitchBook, told the New York Times. “You talk to anyone who’s on the fence about buying an EV and the No. 1 concern that comes to mind is range anxiety.” 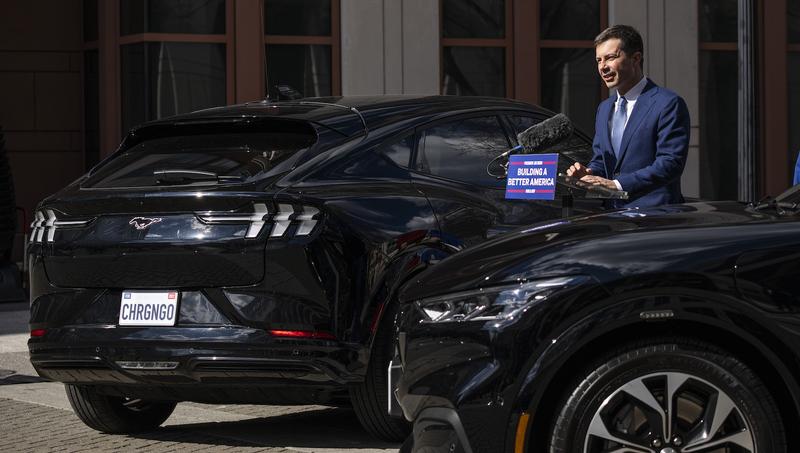 Mark Twain once observed, “What you don’t know won’t hurt you near as much as what you do know that t’ain’t true.” Gordon says, “The problem with this logic is it is building out an infrastructure system for the people who don’t use it, not for the people who do. In fact, lack of public charging availability — and range anxiety more generally — is not a major concern among most EV owners. It turns out, people wildly overestimate the number of miles they typically drive and the frequency with which they will need public chargers.”

Gordon claims, “Surveys and studies repeatedly show the vast majority of EV charging is done at home, either in a driveway or garage. Consumer Reports found that owners of EVs who can charge at home and have a car with a range of about 250 miles can do 92 percent of charging at home, visiting public chargers on average just six times a year. In fact, this is one of the key benefits of EV ownership. Earlier this year, AutoNation CEO Mike Jackson said on CNBC, ‘Here’s what they [EV owners] like — they buy an electric car and they tell us, ‘You know what’s great? I never have to go to a gas station again.'”

What the US really needs are careful, targeted policies. “The gaps in EV charging infrastructure — gaps in both quality as well as quantity — are real but will not be solved with a buckshot policy of spraying hundreds of thousands of them all over the country hoping the gaps eventually get filled by sheer numbers. That approach is not only a potential for wasting tens of billions of tax dollars that could be spent on other critical infrastructure needs — like upgrading the nation’s pathetic public transportation or rail infrastructure, to pick just one potential use — but may not even solve the biggest EV charging problems to begin with,” Gordon writes.

Vice questions the wisdom of installing lots of Level 3 DC fast chargers everywhere. For one thing, they cost many times more than a Level 2 charger does, which burns through the available funding more quickly. For another, the electricity they provide often costs two to three times more than most drivers pay to recharge their cars at home overnight. While fast charging may be necessary occasionally, for most drivers that will only happen a few times a year.

Fast chargers are incredibly energy intensive. As the electric vehicle charging company EVgo explained in a white paper, the energy consumption of one DCFC station with four 50 kilowatt chargers in use 35 percent of the time uses as much energy per year as it would take to power 35 single family US homes. Four 150 kilowatt chargers at the same utilization rate would require the power of 100 homes. And finally, four 350 kilowatt chargers would equate to about 230 homes. Gordon worries that supplying that much electricity may actually increase reliance on thermal generating stations to meet the demand.

If you read the EV sub-reddit on a regular basis, you will find post after post by electric car drivers who encounter broken, dirty, or non-functioning chargers every day. In a recent survey, Plug In America, found 54 percent of EV owners reported experiencing problems with public charging, usually because the charger was broken. “The U.S. has a viable, achievable path to reach widespread EV adoption soon, as long as we focus not on what people eyeing EV’s skeptically from a distance say they want but what EV owners actually use,” Gordon says. Amen to that.

Appreciate CleanTechnica’s originality? Consider becoming a CleanTechnica Member, Supporter, Technician, or Ambassador — or a patron on Patreon.
Advertisement
Have a tip for CleanTechnica, want to advertise, or want to suggest a guest for our CleanTech Talk podcast? Contact us here.
PREV