If it were up to me, my devices' batteries would harbor an unlimited power supply. But as this is impossible, I prefer my charging sessions to happen easily and quickly – and Belkin's latest power products delivered just that.

Belkin recently released the Boost Charge Pro 3-in-1 Wireless Charging Pad ($149.99) and the Boost Charge Pro Portable Fast Charger for Apple Watch ($59.99). The Charging Pad is essentially a design update to the 3-in-1 Wireless Charger with MagSafe, a similar power product that Belkin released last year timed with the iPhone 12. However, this year's iteration eliminates the floating design – making the device actually usable for iPhones older than the 12 – and implements a new fast charger for the Apple Watch Series 7.

The same fast charger is built into the semi-aptly named Portable Fast Charger, a standalone power supplier for the Apple Watch. While this charger will work with any Apple Watch, it is optimized for the Series 7's fast charging technology.

As an experiment, I put the chargers to use on two Apple Watches – the Series 5 and Series 7 – as well as an iPhone and a set of AirPods. After pairings with both Belkin chargers and Apple's own Watch charger, here's how they performed, both in power delivery and ease of use.

How fast is Fast Charging, exactly?

One of the Apple Watch Series 7's selling points was the brand new fast charging technology, which Apple claims allows up to 33 percent faster charging when compared to a Series 6. Both Belkin chargers incorporated this new tech and promised to deliver speedy power delivery. But "33 percent faster" is a little vague, so to make the speed difference jump out, I charged my watches in 15 minute increments on each charger and compared the battery increases in that time.

Every possible way to charge my devices. Credit: Jennimai Nguyen

With no Series 6 on hand to compare with the Series 7, I had to do some math to figure out exactly how much faster the charging should be (and anyway, doesn't an upgrade from a Series 5 to a series 7 feel more realistic?) I'll spare you my actual pen-and-paper math work, but when all was said and done, I determined that if Apple's claims hold true (and if my math checks out) the Series 7 should charge about 46.6 percent faster than the Series 5.

So does the real world battery charge rate measure up to the math, and what Apple and Belkin claim? I charged my devices in pretty much every possible configuration so I could answer that for you.

In terms of battery increases during my test, after 15 minutes of charging both watches on theBelkin Portable Fast Charger for Apple Watch, I saw:

Now, it is important to note that both of these chargers also used different adaptors. I had the Portable Fast Charger hooked up to my 20W USB-C adaptor from Apple, while the included Apple Watch charger was attached to a standard 5W USB Apple adaptor. Using different adaptors almost certainly played a part in the differing charge times, but it was necessary in order to use each cable.

I also conducted a similar test with the 3-in-1 Wireless Charging Pad. 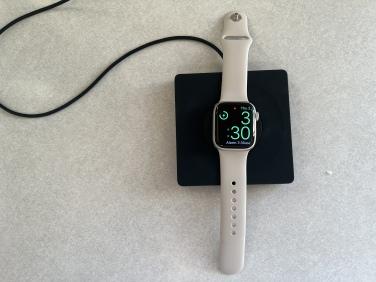 The results speak for themselves. Clearly, the slowest charger of the bunch was the included Apple Watch Series 5 charger, and the fastest was the Belkin Portable Fast Charger.

I didn't compare the AirPods or iPhone 12 on their original chargers, as Belkin doesn't claim to charge these any faster than normal. The most interesting difference between all of these results is that the Apple Watch Series 7 did charge fastest on the Portable Fast Charger, even compared to the other Belkin product, which also implements the fast charging technology.

This is most likely explained by the fact that charging one device is almost always more powerful than three at once. I also had the Portable Fast Charger hooked up to my 20W USB-C adaptor from Apple – the charger only requires a 5W adaptor at minimum, so the additional wattage was a plus. The 3-in-1 Charging Pad comes hooked up to an included 15W adapter that provides plenty of power, and these days I appreciate almost any kind of included adapter (ahem, Apple!)

Overall, the chargers were super speedy and extremely easy to use. While one clearly charged faster than the other, I'm more than willing to trade a little speed for more devices charging simultaneously, or switch to the single charger if I really needed speed at that moment.

Both chargers are minimalist and feel luxe, but I did have one gripe.

Regarding each charger's design, I had few complaints. While I think I personally prefer last year's more unique floating design for the 3-in-1, I recognize the usefulness of the Charging Pad's more classic flat look.

The floating design made it so MagSafe was required; without it, your iPhone couldn't adhere to the elevated charging pad. With the Charging Pad's flat module, MagSafe is more of a nice bonus. If you have it on your iPhone 12 or newer, great! Enjoy your perfect alignment. If you don't, no biggie. You can still lay an iPhone 11 or older right across the charger with no fear of it falling off. Regardless, the Charging Pad fits right in with a sleek home tech display.

The Portable Fast Charger sported a very similar matte black look as the Charging Pad, and I liked that both the standalone watch charger and the watch module on the Charging Pad allowed for the device to charge in the vertical Nightstand mode position. Not only does this look nice, but if you leave your Watch on either charger in this mode overnight, it also allows it to act as an alarm clock. The charger also adjusts for different heights in this mode, allowing bigger Apple Watches or those with a bumper case to easily rest vertically without risking misalignment.

My one gripe is not so much in the build of either charger, but in the misleading naming. You see, the Portable Watch Fast Charger does half of what its name suggests. It charges quite fast – we've proven that. But it is not, in fact, a portable charger.

When I first received the product, I thought this charger would be a portable power bank for the Apple Watch. The design even further confirmed this: The Portable Fast Charger sports a fantastic cord module that allows you to wind the 4 foot cable into the device, making it very compact and seemingly easy to whip out of a bag to charge while out and about.

The 4 foot cord piles neatly and easily into the circle cutout in the back of the charger.Credit: Jennimai Nguyen

However, Belkin only meant that this charger is portable in the sense that it is small and travels easily. The same goes for the 3-in-1 Charging Pad, which Belkin's product description names as "take it anywhere" in that it, too, easily slips into a bag for travel due to its slim nature.

You can imagine my disappointment when I plopped my Apple Watch on the Portable Fast Charger sans connection to a power source only to discover it wouldn't charge this way. It was even more frustrating when I found out that Belkin actually does have atrue portable charger for Apple Watches– it just wasn't this one.

While the Fast Charger performed great once I plugged it in, I wish it hadn't fooled me into thinking I could take it on a road trip and power up my device. Just please don't call something a portable charger when it isn't really a portable charger!

Despite that rather massive initial letdown, I do think that these latest chargers from Belkin are overall impressive. However, they're really only useful if you specifically own the right devices, or don't previously own similar chargers.

SEE ALSO:7 wireless chargers that will juice up your phone crazy fast

Personally, I wouldn't upgrade from last year's 3-in-1 Belkin floating charger to this year's Charging Pad. I like the prior design, and I have no need for the only technological upgrade in the fast charging Apple Watch module – which you can only use with the Series 7. With any other watch series, the charging ability remains the same, if not slightly worse, than the classic Apple charger. And as both chargers still cost $149.95, it seems the similarity is reflected in price.

The same goes for the Portable Fast Charger. If you have a Series 7 and need quick charges often, I think it's very worth it. If your device is older than that, it will still work, but you'd essentially be paying $60 for a pretty bedside charger stand. I don't see the point in spending the money when you'd be missing out on the main point of use.

If you're looking for alternatives, plenty of similar chargers exist. But you'll often be compromising for a cheaper price with fewer device charging modules, no MagSafe, or lower wattage. For those options, check out:

The Ultimate Spring Cleaning Checklist Register for our free newsletter