how to make free energy mobile phone charger with magnets

Wireless power holds the promise of freeing devices from batteries and cables, but commercial systems are usually limited to charging stations. Now scientists have developed a way they say can safely charge devices anywhere in a room.

Moreover, "this approach could scale down to charging toolboxes and up to wireless charging warehouses," says study lead author Takuya Sasatani, an electrical and computer engineer at the University of Tokyo. In the future, it could also power implanted medical devices, "which currently have critical challenges in their power supply," he adds.

Wireless power transfer systems are currently used to help charge small electronic devices such as smartphones and electric toothbrushes. However, most commercial systems, which rely on magnetic fields, require these devices to be stationary and kept on or near their charging mats or docks.

Wireless power transfer strategies using microwaves and other forms of electromagnetic radiation could achieve efficient charging at greater distances. However, microwave-based techniques may pose safety hazards to living tissues and require large antennas as well as complicated mechanisms to keep track of devices.

Now Sasatani and his colleagues have developed a method of safely turning a room into a wireless charging station. They suggest it could also scale down to create small charging cabinets, or scale up to turn entire factory floors or buildings into wireless charging zones.

The new technique, dubbed multimode quasistatic cavity resonance, uses conductive surfaces built into the walls of an entire room and a conductive pole in the middle of the room to generate 3-D magnetic field patterns that can efficiently interact with small wire coil receivers attached to electrical devices. In experiments with a purpose-built aluminum test room measuring 3 meters by 3 meters by 2 meters, the researchers wirelessly powered electronics such as smartphones, lightbulbs and fans anywhere in the room regardless of where people or furniture were placed.

"Our technology enables tens of watts of power delivery everywhere within large volumes, which other approaches could not safely achieve," Sasatani says. "Compared to wireless charging pads composed of coils, our approach has much more freedom in device positions."

One key to making this method work was confining harmful electric fields that could damage biological tissues. The scientists used a kind of capacitor placed in cavities in the walls so the structure could generate magnetic fields that resonate through the room while trapping electric fields within the capacitors. 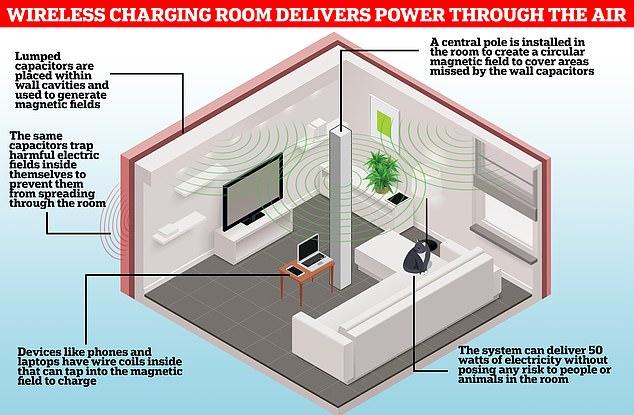 Another challenge was generating a magnetic field that could reach every corner of the room, as magnetic fields usually travel in circular patterns, creating dead spots in a spare room. To solve this problem, the researchers generated multiple 3-D magnetic fields — one travels in a circle around the room's central pole, while the others swirl in the corners, traveling between adjacent walls, successfully eliminating null zones.

Power delivery efficiency exceeding 37% is achievable anywhere in the room and also while a device is in motion. The receivers do need to align at right angles to the magnetic fields to achieve maximum charging efficiency.

"One apparent disadvantage of our method is that we have to modify the entire environment to make it work," Sasatani notes.

Safety tests with anatomical dummies revealed the new system could deliver at least 50 watts of power to any location in the room without exceeding FCC and IEEE guidelines for exposure to electromagnetic fields. The researchers suggest they could deliver even more power with further tweaks.

"We note that our safety evaluation is still primitive, and we surely need further investigation on this topic," Sasatani says.

Such research could help boost new Internet of Things (IoT) applications, Sasatani says. It could also help charge mobile robots in homes, warehouses or other locales.

"Currently, it's hard to place small computers everywhere because of the cost to maintain the batteries," Sasatani explains. "Because this technology can omit manual charging, it can be a driving force for distributing intelligent devices everywhere."

The group’s technology will likely be easiest to implement in newly constructed buildings, but retrofitting existing structures to accommodate such charging may be possible as well, Sasatani says.

"We are planning to explore building these systems using standard construction techniques," Sasatani says. "We also may be able to paint conductors on the walls to make the system, if excellent conductive paint is developed in the future."

The scientists detailedtheir findingsonline in a recent issue of the journal Nature Electronics.

Tips on How To Take Care of Your Computer's Monitor

These Weed Sellers Aren’t Waiting for Permits: ‘Like a Dream Come True’