Exploding Phones: Why It Happens, How to Prevent It

Sometimes smartphones explode. This summer alone, an Alaska Airlines flight was evacuated after a Samsung Galaxy A21 caught fire, a Galaxy A02 caused a house fire in Glasgow, a device exploded inside a man's pocket in Vietnam, and a battery blew up in a man's hand in China.

The likelihood of your smartphone exploding is slim, but it happens, as demonstrated by Samsung's Galaxy Note 7 fiasco a few years ago. But why does it happen and what, if anything, can you do to avoid it?

Why Do Smartphones Explode?

There are many reasons a smartphone may catch fire or explode, and it almost always has to do with the device's battery. Modern mobile devices are powered by lithium-ion batteries, which contain a careful balance of positive and negative electrodes to allow for recharging. When something goes wrong, the inner components of the battery can break down and create a volatile reaction that can lead to fires.

This can happen for multiple reasons, but the most common problem is excessive heat. If a charging battery or overworked processor becomes too hot too quickly, it can ruin the chemical makeup of the phone's components. With batteries, a chain reaction called thermal runaway can cause the battery to generate even more heat and eventually catch fire or explode.

The reason for your phone overheating will vary. Physical damage—the kind sustained from a fall or excessive bending—can disrupt the inner workings of the battery. Leaving the phone out in the sun for too long, malware overworking the CPU, or a charging debacle can all cause short circuiting within the device.

Or it could be something outside your direct control. Batteries degrade over time, so if a device has been used for several years, it's possible for the internal components to fade, leading to swelling and overheating. Or an issue with the phone's production may be to blame, which you can't really account for.

You may not get a warning, but if you hear hissing or popping sounds coming from the phone or smell burning plastic or chemicals, it may be damaged and on the verge of exploding. (Don't put your face near it, obviously.) Similarly, look out for excessive heat coming from the device, especially when charging. If it's burning hot to the touch, unplug it immediately.

Another big warning sign is a swollen battery, which can happen if it has been damaged or internal components have degraded. Look out for any changes in your device's shape, including a protruding screen, an enlarged seam, or a distended chassis that may cause the phone to no longer sit flush with a flat surface.

PCMag's Senior Security Analyst Max Eddy nearly blew up his aging Android phone while trying to remove all traces of Google services in 2019. All he got for his trouble was a bulging battery. 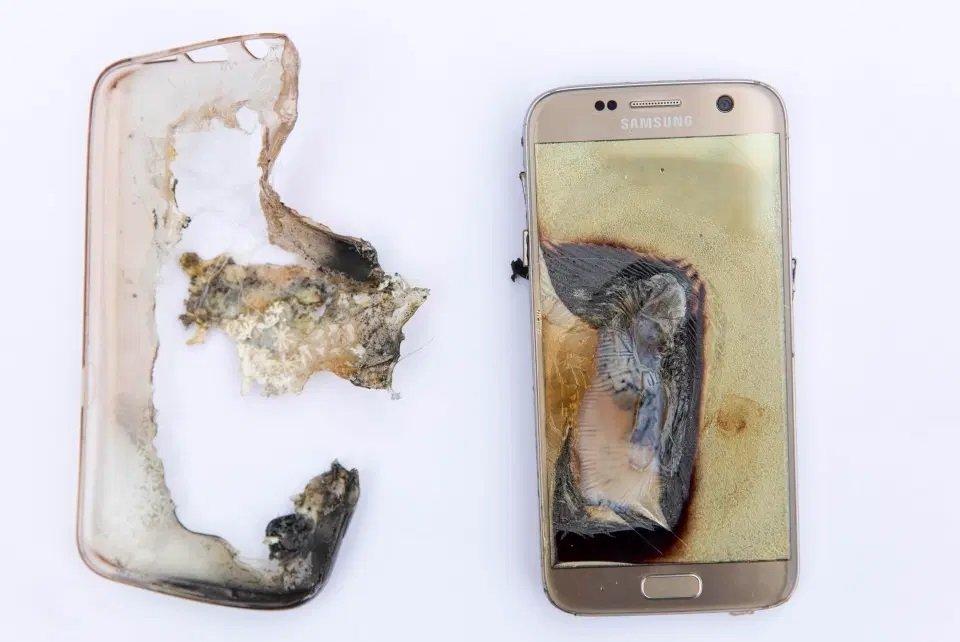 Most modern smartphones no longer allow you to remove the battery, so if you're concerned about your device, turn it off and take it in for service immediately.

Can You Prevent Your Phone From Exploding?

While there are steps you can take to alleviate some of the strain you may put on your phone's battery, there's not a whole lot you can do if the issue is a manufacturing defect or naturally degrading power source. Batteries must be rigorously tested for faulty components, but cheaply made units may possess imperfections that can cause a phone to overheat. There's no quick fix when it comes to shoddy battery construction.

In the case of the Note 7, a design flaw was to blame; there was nothing the average consumer could do to fix it. However, there are several dos and don'ts that may help you maintain the health of your device and avoid a fire.

Get a Phone Case

While it isn't common, dropping your phone can damage the battery. Just ask PCMag's Mobile Analyst Steven Winkelman, who received a Chinese-manufactured phone in the mail for review. After accidentally dropping it from the kitchen counter to the floor, though, the phone emitted a chemical smell and burst into flames within minutes.

Not every phone is going to go up in flames after a fall, but one way to protect your device's innards is to cover it with a phone case—preferably one with a lip around the edge of the phone. These cases aren't as expensive as they once were, and even the cheapest offer more protection than nothing. At this point, there's no excuse to go without one. If you have an iPhone 12, 12 Pro, 12 Pro Max, or Samsung Galaxy S21, we have a few suggestions.

You probably know that heat is your phone's worst enemy, but what about cold? Your phone's battery is optimized to work within a certain temperature range—between 32-95 degrees Fahrenheit. Regularly exposing the battery to harsh conditions can damage the components within and cause long-term damage.

This means you should avoid leaving your device in direct sunlight, or on top of a hot radiator, for long periods of time, especially when charging. You should also avoid freezing cold temperatures whenever possible. So don't place your phone inside the freezer, if you still believe in that myth, or leave it in your car on particularly frigid days.

Don't Cover Your Phone While It's Charging

This one sounds silly, but I can personally attest to this; don't cover your phone with anything while it's charging and don't charge the device in bed. Years ago, I woke up one morning to find my phone underneath my body and burning my bare chest. At some point in the night, I had rolled onto the phone, causing the device to overheat. Not only did it burn my body, but it burned itself out and stopped working.

Your best option is to place your phone on a flat, hard surface—like a table or desk—when it's time to charge the device. Snuggling up to it at night runs the risk of you rolling on top of it, wrapping it in blankets, or covering it with a pillow. To be safe, keep the device free from plush surfaces, papers, or general clutter.

There are a lot of battery myths out there. We shot down many of them, like the idea that charging your phone overnight will cause it to explode (it won't). For our purposes, remember that batteries naturally deteriorate over time, and the best you can do is delay that erosion.

We recommend keeping your phone charged between 30-80% most of the time (there's no reason to always insist the battery be at 100%) and refrain from fast charging overnight, if you can help it. However, don't get too worried about this; it will take a few years for your battery to naturally deteriorate. If you switch out phones every year or so, you'll be fine.

Use the Right Charger

Your device needs optimal voltage and current to charge properly, so we recommend sticking with the charger that came in the box or grabbing one directly from the phone's manufacturer. That means if you have a Samsung phone, buy a cable from Samsung; if you have an iPhone, get a Lightning cable from the Apple Store.

You also shouldn't mix and match cables and power bricks because different units have different wattage levels. It may be tempting to save some money and get a cheap charger off Amazon or use whatever you have around the house, but this is a good way to ruin your battery.

If you absolutely must get a third-party charger, stick with a known brand like Anker and not a no-name company just because it's cheaper. You can also check to see if a USB-C cable is certified by the USB-IF or a Lightning charger has the MFi badge (and is authentic if it does). It may be a little more expensive, but it will be worth it in the long run.

Take Care of Your Cables

Once you have a charger, you need to take care of your cables; damaged wires can lead to charging issues and even cause their own fire hazard. Back in the day, my MacBook Pro's MagSafe charger frayed until the wiring became exposed. Eventually, the charger shorted out and caught fire. The same can happen to your phone plug.

There are a few best practices you should keep in mind when managing your phone charger, or really any wire that connects to your devices. Avoid wrapping wires too tightly and remember to unplug the charger from the actual plug instead of yanking it out from the cord. If your current charger is fraying or seems to have melted, it's time to get a new cable.

Look Out for Malware

If you become infected with malware, the nefarious program may hog your phone's resources for tasks like cryptomining, which can overheat the battery and potentially damage the phone. Does your phone run slower than it probably should? Get hot for no good reason? Hit you with nonstop pop-ups? You could be infected with malware.

Thanks to the closed-off nature of Apple's App Store, the iPhone tends to be less susceptible to malware. The same can't be said about the Google Play Store, but many popular antivirus companies offer antivirus apps for Android as part of multi-device subscriptions. Bitdefender, Kaspersky, Norton, and McAfee are all PCMag Editors' Choices picks in the category.

Don't Worry, Your Phone Is Unlikely to Explode

In spite of all these warnings—and how common they might appear on the news—exploding phones are still extremely rare. When the Galaxy Note 7 was recalled by Samsung in 2016, only about 100 of the 2.5 million units shipped were reported to have exploded. That's still scarier than zero, but if you're concerned about ruining your phone, there are more common issues to worry about.

And remember, exploding phones make companies liable for damages, so if there is ever another widespread recall again, it's likely to be dealt with relatively quickly. For instance, Samsung put out software updates that throttled the phone's battery capacity before eventually making the device completely unusable as a safety precaution.