If you build it, they will come. At least that’s what the state of Indiana and its utilities are hoping for when it comes to charging stations and electric vehicles.

Indiana is behind on infrastructure for plug-powered cars, while some of its Midwestern neighbors and other states across the country speed ahead with installing charging networks.

“I would say the state of Indiana has been lacking in EV infrastructure, and I don’t think anyone would argue with that,” said Kerri Garvin, executive director of Greater Indiana Clean Cities, Inc. a nonprofit focused on advancing alternative fuel vehicles. “That’s a big deal.”

There are a few hundred fully electric models expected by 2025 and it is predicted that annual EV sales will exceed 1.2 million by that same year. That growth — as well as the environmental and economic benefits that go with it — could pass Indiana by if the state doesn’t take some big steps, Garvin said.

So that’s just what it’s doing.

The state of Indiana got a big chunk of change as part of the multi-billion-dollar settlement with Volkswagen that resulted from the company manufacturing and installing defective emissions-control devices in hundreds of thousands of diesel-powered vehicles. With some of that money, Indiana is awarding grants to build out a charging network for electric vehicles across the state.

The biggest of those grants, worth $5.5 million, was recently awarded to a group of utilities to add more than 60 fast-charging stations — or those that charge within about a half-hour — across the state.

Still, many say this is just the beginning.

“I don’t think we could have expanded this way or to this scale at all without the grant,” said Beverly Gard, chair of the VW Fund Mitigation Committee. “I think Indiana would be set back years without this funding.”

The Indiana VW Committee was formed in 2017 to help disburse Indiana’s share of the funds from Volkswagen’s settlement over clean air violations. The settlement came about to resolve allegations that the company installed devices in its diesel-engine cars that emitted levels of dangerous air pollutants in excess of EPA regulations.

That’s why the funds from the settlement have to go toward replacing diesel emission sources with cleaner technology. Indiana received approximately $41 million.

“When you look at it from that standpoint,” Seals said, “there’s a lot of room between these places that would allow you to get from corner to corner in Indiana that doesn’t currently exist in the state.”

Even if drivers plan to do a long trip only once or twice a year, that introduces anxiety on whether those cars will be able to get them there, she said. That’s why they need the fast-charging network along their route.

“This program will help remove that range anxiety that might be holding them back from getting an electric vehicle,” Garvin said. “Once the infrastructure is there, I think we will see a surge.”

The state has identified a need, Seals said. One of the directives that came out of receiving the VW funds was “the hope and desire to provide some sort of transformational change in Indiana” in the transportation sector.

The funds also are the kickstart to make it happen, Gard said. Without it, many utilities or private companies wouldn’t want to take the leap and make that investment.

“This is really important and happening in a lot of other states,” Gard said. “It would be a shame to have networks everywhere and then you come to our state and can’t drive across Indiana in your electric car.”

In May, Indiana’s VW Committee awarded a group of eight utilities across the state $5.5 million to install 61 of the fast chargers across the state. That group includes Duke Energy, NIPSCO, AES Indiana (formerly IPL) as well as some other smaller providers.

Over the course of several months, the state considered four different finalists to install the fast chargers. Various factors that they looked at include how many chargers they planned to install, the proposed locations, the distance between chargers and the cost-effectiveness or cost per charger. 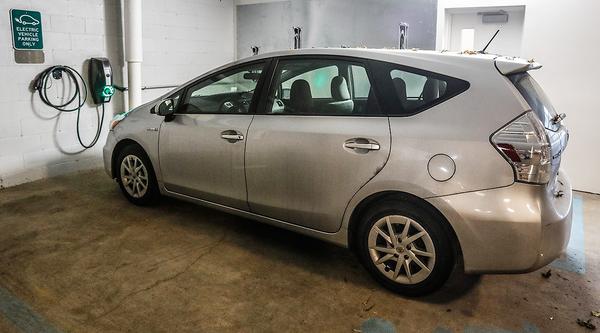 At 61, the utility group proposed the most chargers of any of the groups; the others suggested only about half that, between 30 and 40. The chargers in the utility’s proposal were also the most cost-effective: planning to cost around only $90,000 each. The cost for the others was at least $40,000 more per charger.

But the utilities have something else that sets them apart, too: They are the direct providers of the fuel for the charging stations.

“If anyone is able to invest in that infrastructure, it’s the ones controlling and managing the fuel, or the electricity, going to the chargers,” Garvin said. Any of the other companies would have to coordinate with the utilities to get the power, she added, and that tacks on time and money.

The utilities first came together about four years ago with this idea to help build out the network, and knew that there would be some funds available to do so, said Jordan Wallpe, the Midwest electric transportation manager for Duke Energy.

“We already are in the neighborhoods, we know the customer base, we know the locations they need to go, and we have access to the vendors for the hardware and equipment,” Wallpe said. “We have the knowledge and the base, and that started the whole journey.”

When picking the best locations, the utilities focused on those that are within one mile of an exit, have ample power supply, and have good amenities nearby like a shopping plaza, fuel center or restaurant. Each utility will pick its own hardware, Wallpe said, but there will be minimum speed times for charging.

“There will be a little different flavor at each station,” he said, “but it will be a similar experience and they all will be reliable.”

The goal is to get the funding on the streets as soon as possible. Some of the utility group’s first few fast-charging stations could come online as early as this year, according to Wallpe. But most stations will be done in 2022 and the last ones finished up in early 2023.

The utilities don’t yet know how much it will cost to charge at each station, Wallpe said, but it will vary depending on the utility that oversees the station.

There are still a lot of unknowns, Wallpe added, such as how many drivers will use the stations. Based on those utilization rates, the stations could be self-sustaining and pay for themselves to stay on top of maintenance.

The $5.5 million will not be enough to fully cover the cost of installation and ongoing upkeep, Wallpe said, so utilities are putting in some upfront capital. The utilities don’t anticipate this cost to show up on their ratepayers’ bills, but any decision along those lines would also need to go through an extensive process and be approved by Indiana’s utility oversight body.

“Each utility has decided to take on the risk of fronting the remaining amount to bring this to the table, and there is risk there,” Wallpe said. “But there is a huge opportunity, and if we can get the stations out there and a bump in EV adoption, there are a lot of benefits for us and the state.”

Those benefits are both financial and environmental.

If the infrastructure is here, the idea is that the demand for EVs will shortly follow, especially as their cost continues to come down. And if there’s demand, then the idea is that supply will follow, Garvin said. Most people that want to buy an EV currently have to drive to Chicago, she said, because that’s where the options are.

But if more people are interested because range anxiety is out of the picture, then she hopes that will bring manufacturers more on board with supplying EVs to Indiana and keeping that business here. It also may attract the actual manufacturing and production of EV parts to the state, Garvin added, bringing further business and jobs.

There also are the environmental advantages. The main goal for the VW settlement is to reduce diesel emissions and replace them with cleaner sources, and that’s what EVs do.

The electricity to fuel the cars can come from anything: solar, wind, natural gas, or even some coal. But “even if it’s 100% coal, that still saves more (carbon dioxide) than the emissions that come out of the tailpipe of a gas car,” Wallpe said. “And over time, as electricity gets cleaner, then EVs will keep getting cleaner, too.”

Several of Indiana’s utilities, such as NIPSCO, have announced in recent years that they are moving away from fossil fuels and leaving heavily into renewable energy resources such as wind and solar.

Everyone agrees this is just the beginning.

Even though Indiana allocated the maximum amount it could to EV charging, Seals with the state said this is just a pilot and foundation. It will allow the state to study and learn what works best, and hopefully be able to make the legitimate business case to keep growing the charging network throughout the state.

Gard said she hopes this spurs more competition and that the private sector will “step up” and fill in some of the areas they couldn’t get to with this funding.

Garvin said she can think back to when gas stations were put in and the next one would not be for another 50 miles, but now they are at every exit. She thinks it will be like that with EV stations, not because it’s needed but out of convenience like with gas stations.

She sees the state’s current effort as a catalyst.

“Will there still be spots where charging stations are needed? Sure,” Garvin said. “But this is a very good starting point.”

IndyStar's environmental reporting project is made possible through the generous support of the nonprofit Nina Mason Pulliam Charitable Trust.

LG's last-ever phone has rolled off the production line