"Internet addiction" was once a term used to describe youngsters hooked on watching videos or playing games online. But today, an increasing number of seniors are also falling victim, Yinchuan Evening News reported.

A woman surnamed Wang from Yinchuan in the Ningxia Hui autonomous region, recently experienced a worrying episode. One morning as she arrived at her office, she noticed missed calls from her mother.

When she called back, Wang was surprised to find that her mother only wanted her phone charger, which she had mistakenly taken to the office.

She hurried home only to find that the phone was still 70 percent charged, but her mother was still afraid that it would run out of power. Wang then realized her mother was addicted to her mobile phone.

After feeling dizzy recently, Wang's mother underwent a physical checkup and was diagnosed with cervical spine deformity, as well as impaired eyesight.

She spends eight hours a day playing games, watching news and short video clips online and is just one of a growing number of seniors increasingly glued to their mobile phones.

According to a report on internet use by China's elderly produced by mobile content aggregator Qutoutiao last year, 38.6 percent of people aged 60 or older were internet users, and around 0.2 percent of them spend at least 10 hours a day online. 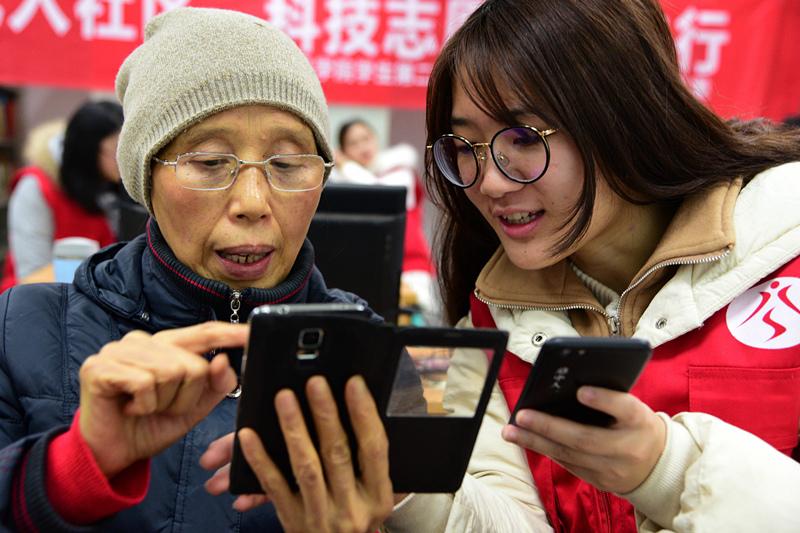 Medical experts said phone overuse can worsen cervical spondylosis－age-related wear and tear of the neck－and lead to a higher risk of cardiovascular disease.

"My mother started to use a smartphone three years ago. Now, she shoots video clips every day and often stays up late playing on the phone," a woman surnamed Zhao said. "She ignored me when I spoke to her about it and even got angry with me."

Another man surnamed Ma said:"Since my father installed a shopping app on his phone, he has become a compulsive buyer. Every day, there are parcels delivered to our home. But many of the things he buys are discounted and of poor quality." Ma asked his father to reduce his time online, but to no avail.

Wei Junping, who is a psychological consultant, said that heavy use of mobile phones is linked to the spare time seniors have after retirement, as well as their desire for contact with others.

"After they retire, some elderly people have fewer opportunities to socialize and fall into a spiritual void of loneliness," Wei said, adding that for many retirees, a smartphone is the best way to kill the time.

Wei said while it is natural for the elderly to try to meet their emotional needs and find validation online, they should try to limit the amount of time they spend on their mobile phones and ensure they get regular rest at night.

For their part, adult children should visit their parents more frequently to help relieve their loneliness and encourage them to get involved in more healthy activities to enrich their lives.