Motorola has announced its new high-end phone for 2022: the $1,000 Motorola Edge Plus. It has a 6.7-inch screen along with sharper selfie and ultrawide cameras than most phones, including the iPhone 13 Pro and Samsung Galaxy S22 Ultra. But Motorola makes compromises in other areas, particularly in the camera's lack of a telephoto lens.

The Edge Plus, which first launched in China as the Edge X30, will be available unlocked through retailers like Amazon, Motorola's website and Best Buy. Motorola hasn't shared specific US launch timing yet, but it did say the phone will also be available through Verizon, Boost Mobile and Republic Wireless in the coming months. The unlocked version will be available at a $100 discount at launch.

Motorola designed some of the Edge Plus' features around trends that emerged during the pandemic, said Ruben Castano, Motorola's head of customer experience, in an interview with CNET. Those trends include more time being spent watching TV, playing games and video chatting on phones. As such, the Edge Plus has a 6.7-inch OLED screen that can boost its refresh rate up to 144Hz and features a 60-megapixel front camera.

"The phone has become the center, almost a hub of entertainment for consumers," said Castano. "So that is the one thing that I think that pandemic did dramatically change in terms of consumer behaviors."

There are also two 50-megapixel cameras on the back along with a 2-megapixel depth camera for taking better portrait photos. The device runs on Qualcomm's newest mobile processor, the Snapdragon 8 Gen 1.

Some of the Edge Plus' characteristics, particularly the sharp selfie camera and high display refresh rate, could help Motorola stand out against Samsung, which dominates the Android smartphone market. A refresh rate of 144Hz isn't new to smartphones -- not even for Motorola -- but it isn't exactly common either. 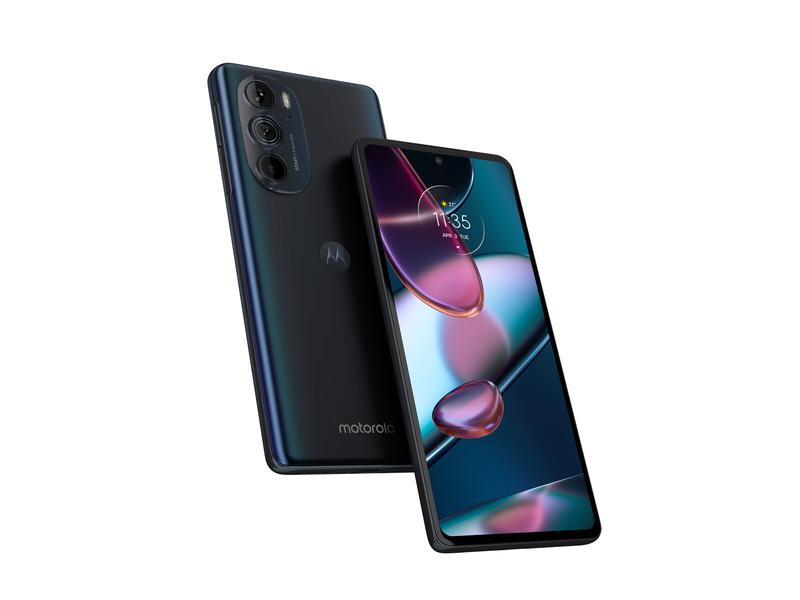 The Asus ROG Phone 5, which is designed for gaming, has a 144Hz refresh rate. But a 120Hz refresh rate is more typical for mainstream phones like Samsung's Galaxy S22 lineup. The 60-megapixel front camera is also somewhat rare; Samsung's top-of-the-line Galaxy S22 Ultra has a lower resolution 40-megapixel selfie camera by comparison.

Motorola is also leaning on the Edge Plus' 50-megapixel ultrawide camera to distinguish it from the pack. Popular phones like the iPhone 13 Pro Max and Samsung Galaxy S22 Ultra each have 12-megapixel ultra-wide cameras, potentially giving Motorola the chance to stand out.

However, it's doing so at a cost. Unlike many phones in Edge Plus' price range, Motorola's new phone doesn't have a dedicated telephoto camera lens. The company says other camera improvements it's made regarding pixel size, sensor size and aperture will enable a good enough digital zoom.

On paper, the Edge Plus' 50-megapixel main sensor also sounds like a step down from the older Edge Plus' 108-megapixel camera. But again, Motorola says it's improved the camera's pixel size and focus on this year's model.

Motorola says the Edge Plus will also receive at least two major Android operating system upgrades and three years of security updates. Samsung, on the other hand, just announced that its Galaxy S22 devices and other recent phones will support four generations of Android upgrades.

Motorola's parent company Lenovo is the third-largest smartphone-maker in the US, capturing 12% of the US market as of late 2021, according to Counterpoint Research. Lenovo doesn't even place in the top five when it comes to global shipments, Counterpoint Research also reports.

But Motorola's approach with the Edge Plus seemingly falls in line with the general direction smartphones are heading. In his story about the future of mobile devices, my colleague Patrick Holland reported that we'll continue seeing more niche phones with targeted appeal. Foldable phones and devices tailored for playing video games, like the Asus Rog Phone 5, fall under that umbrella. With its focus on specific tasks like video chatting and playing games, it sounds like the Motorola Edge Plus does, too.