is it bad to use mobile phone while charging

No, using your phone while it’s charging won’t send electric waves through your body

Chances are, you’ve used your phone while it was charging. It might even be plugged in now as you’re reading this. But if you’ve been on YouTube or TikTok recently, you may have come across this viral video, which claims that it’s dangerous to use your phone while it’s plugged in and that it allows electric waves to pass through your body.

In the video, a man uses a voltage stick to demonstrate this happening. He has a small child hold a plugged-in phone, and the voltage stick glows red when it’s pressed against his skin. However, this video is pretty misleading. Here’s how we fact-checked it.

While multiple versions of this video have been shared on YouTube, if you take a closer look at the clip, you can see a TikTok watermark with the username @murtazaahmed41.

Heading over to the user’s TikTok, we can see that this video went insanely viral and was viewed 20 million times. Unfortunately, aside from a bunch of hashtags, the description doesn’t give any additional information.

You want to make sure you feed Google as many keywords as possible for the best results. Using the words “Electricity pass through body while charging tiktok video fact-check,” while grammatically incorrect, provided several results.

One article that popped up was a fact-check from AFP, or Agence France-Presse, an international news agency located in Paris. They looked into this same video. According to their reporting, a voltage stick is a contactless tool that indicates whether there is live voltage in an object. However, they wrote that the video is misleading since anything you hold while it’s plugged into the wall would likely yield the same result. This doesn’t just happen with cell phones. According to the experts interviewed in the article, the same thing would happen if you were holding a blender or any other appliance.

Still, is using your phone while it’s charging harmful? 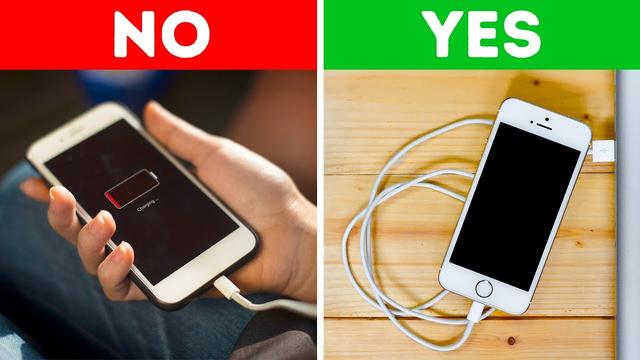 The answer is no. Eric Yeatman, the head of the Electrical and Electronic Engineering department at Imperial College London, told AFP that the tiny amounts of line frequency, like what was picked up by that voltage stick in the video, is “generally harmless.” He did say that cheap chargers may have a higher frequency leakage, but even that wouldn’t harm you unless it fully failed and you were electrocuted. Instead, he told AFP that the biggest risk with using your phone while it’s plugged into a cheap, knock-off charger is that it could catch on fire.

While AFP is a legit news website, it might be one you’re not as used to. So here are some basic things to look for when you read news from a source you’re not familiar with.

Bylines. This is the person who wrote the article. If there isn’t a byline, question why someone wasn’t willing to attach their name to the reporting. Reputable sources will also give you a way to contact the reporter if you have questions or you see something incorrect.

Dates and times. Most news organizations will let you know down to the minute the article was published so you know you’re getting the most recent coverage. They’ll also let you know if it’s been updated.

Hyperlinks. If a story has zero hyperlinks throughout, that’s often a red flag. Treat links as evidence.

Original reporting. Reading through the AFP article, it’s clear the reporter interviewed actual experts. Be cautious when you’re reading an article and every graph is attributed to another news source. When that happens, you should just head directly to the original story instead.

For more general cell phone safety research, the Food and Drug Administration can be a great place. According to the website, “the weight of scientific evidence has not linked cell phone radio frequency radiation with any health problems.”

When it comes to health information, also check out the Centers for Disease Control and Prevention. They wrote that while yes, cell phones do use radiofrequency radiation to send signals, these are different from the ones we know can be harmful (like X-rays). They ultimately wrote that while long term studies still need to be done, there currently isn’t science that links health problems to cell phone use. But if you’re concerned, they gave a tip of using your speakerphone more.

Mostly not legit. While the video wasn’t doctored or edited in any way, the information is presented in a misleading way, since holding the voltage stick to your body while holding any appliance would likely yield the same result. Further, there isn’t any current scientific evidence that shows a link between using your phone while it’s charging and health risks.