The Great Texas Blackout of February 2021 earned the 2021 Ford F-150 PowerBoost hybrid some great press. Out of the misery of that situation sprouted a PR win for Ford: Folks reported plugging their fridges, phones, and other electric gear into the high-output 120- and 240-volt plugs in the beds of their F-150 Hybrid trucks and literally keeping the lights on for days. Now the fully electric 2022 Ford F-150 Lightning leapfrogs that capability by making it possible to power an entire average home for about three days through its charging cord.

Of course, that capability won't be available on the $41,699 base truck. You'll need to spring for the extended range model and its dual onboard charger system that can cram electrons into the (larger) battery pack at a rate of 19.2 kW. (Ford claims this system is an industry first.) Buyers will also then need to own a home into which an 80-amp Ford Charge Station Pro bi-directional charger can be installed. 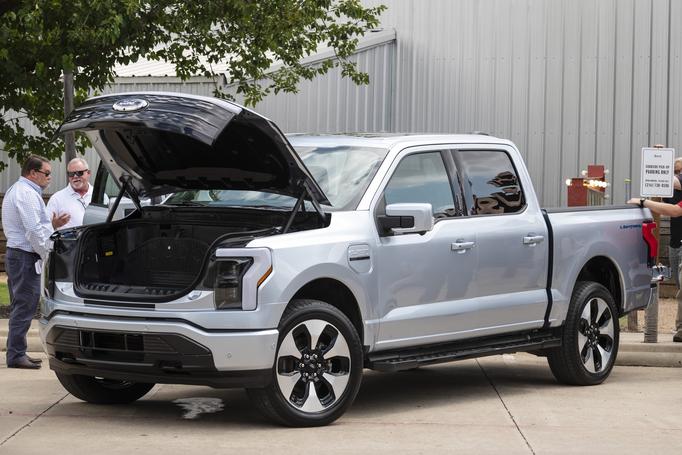 It's the professional integration of this charging station into the home's electrical system that permits the charger to automatically redirect the power flow into or out of the battery when the power blinks off or back on, while safely isolating the house from the power lines to protect line workers trying to fix the grid.

The next step down the charging ladder is a 48-amp Ford Connected Charge station, available to buyers of the standard-range battery (which comes equipped with a single 11.3-kW charger). This adds 19 miles/charging hour and can take the battery from 15 to 100 percent charge in 10 hours. All Ford F-150 Lightning trucks come with a mobile charging unit equipped with a choice of cords that can plug into either a 240-volt NEMA 14-50 outlet (for 13 miles per charging hour) or a conventional 120-volt outlet (for 3 miles per charging hour). Unlike some new EVs capable of up to 800 volts, the F-150 Lightning's system maxes out at 400 volts.

The "MegaPower Frunk" is equipped with four 120-volt plugs and a couple USB sockets provide 2.4 kW of power. That's 20 amps of 120-volt power—way more than enough to run a bunch of cordless tool battery chargers, power electric tools, or even a crock pot—a much cleaner, safer way to prepare road-trip dinners under the hood while driving. And this power is in addition to the power that can be drawn from the outlets in the truck bed, which matches the total peak power of a fully equipped F-150 PowerBoost hybrid—7.2 kW. That's enough for welding or running a home air-conditioner. And of course, when plugged into the above-mentioned Ford Charge Station Pro bi-directional charger, the full 9.6 kW is available to power the home.

When parked and powering various devices, the FordPass smart-phone app automatically notifies the owner when the battery state of charge drops to one-third. At this point charging can be discontinued immediately or the app can instruct ProPower Onboard to continue powering the electric outlets until the point at which there's sufficient charge to reach the nearest available charging station, using the cloud to select from among Ford's network of charging networks that includes some 63,000 plugs.