what voltage is a mobile phone charger

Have you seen the size of a charging brick when it comes to laptops? Depending on which laptop you’re using, some of these charging bricks are huge! This means that if you need to bring it out with you, you’ll need a bag big enough to fit it in, not to mention some of them can get pretty heavy as well.

On top of that, you’ll also need a charger for your phone/tablet as well as other accessories or peripherals that you might be bringing with you on the go. If you’d rather not lug around a ton of gear, then maybe you might want to take a look at the Baseus GaN3 Pro charger.

Right off the bat, you might be wondering what is so special about the Baseus charger? First of all, as the name implies, this is a GaN charger.

This is because of the properties of GaN-based chargers, they tend to be better than silicon at dispersing heat, meaning that there is less energy lost during charging which makes them more efficient. They’re also safer if you’re worried about your chargers getting too hot and maybe damaging your devices in the process.

Unlike some of the other GaN chargers we’ve seen in the past, the Baseus GaN3 Pro is slightly larger, but don’t let the size put you off especially if you need to charge multiple items at once. 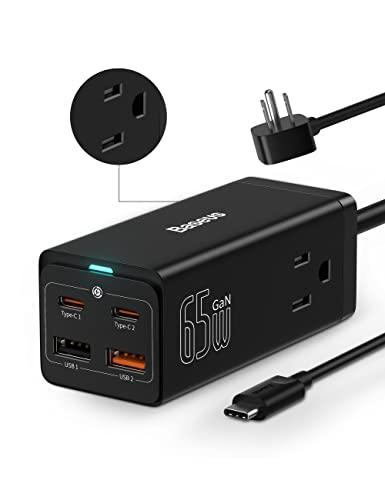 This is because unlike other GaN chargers which usually only feature a couple of USB ports, the GaN3 Pro from Baseus actually comes with six different ways of charging your devices.

It features two AC outlets which means that if your laptop cannot be recharged using USB-C, not to worry as you can plug in a regular plug into it (two in fact).

For those who do have laptops that support USB-C charging, the charger also features two PD USB-C ports, and two USB-A ports for non USB-C devices. According to Baseus, one of the USB-A ports will support as much as 60W of power output, while the other supports 18W QC fast charging.

Baseus has also been pretty thoughtful with its design, where the charger actually comes with a 45-degree angled flat plug, meaning that if you’re trying to use it with duplex wall outlets, it won’t get in the way, and it will also be able to fit behind tight spaces that a typical plug might not.

A lot of companies usually advise their customers to only use official accessories, especially when it comes to charging. We’ve seen a lot of stories in the past of how third-party accessories, especially those that are a bit too cheap to be believed, can cause damage to your device, or even shock the user and cause electrical fires.

With the Baseus GaN3 Pro, the company has built-in safety measures to prevent that from happening. One of those safety designs include how the charging ports themselves are isolated from the AC outlet, thus keeping it away from excessive heat. The actual housing of the charger itself has also been made out of 750-degree retardant housing.

The company is also using a GaN III Pro which allows for better heat dissipation. Other safety features include temperature protection, over-current and over-voltage protection, protection from overcharging, overheating, and also from short circuiting.

Charge all your devices

With some GaN chargers we’ve seen, some only offer USB-C ports which can be a bit limiting for some users. If you plan to travel and want an all-in-one solution, the Baseus GaN3 Pro with all its ports and connections will let you charge and power all manner of devices.

For example, it offers up to 65W of power which means that if you need to juice up a laptop in your hotel room or in class, it will be more than capable. Plus with the additional ports, you can charge up a smartphone, a tablet, a power bank, your smartwatch, Bluetooth speakers, or wireless headphones.

Baseus also lists support for devices like a hairdryer, an electric toothbrush, an air circulation fan, and so on.

We have to acknowledge that as far as GaN chargers are concerned, the Baseus GaN3 Pro is slightly bigger than the competition, but don’t let this dissuade you from checking it out. It is packed full of functionality and is really the perfect travel companion, and at $50, it is actually pretty good value for money.