In a few years' time, fumbling around with messy cords and plugging your device into a wall charger will seem strange. Honestly, it might even seem strange now, at least in the eyes of people who've completely adopted the convenience of wireless charging technology.

Wireless chargers in all their forms — wireless charging pads, wireless charging stands, and others — are getting more and more popular. After all, why would you want to mess around with cords when you can just place your devices on a pad or prop them up on a stand? Not only is it easier, but it looks a heck of a lot tidier, too. (Marie Kondo would be so proud.)

What are the benefits of wireless charging?

Obviously, eliminating an unattractive mess of cords can help you feel a little calmer in your home or inspire more productivity in your workspace. But wireless charging benefits go beyond the neatness factor.

First of all, a wireless charger is more durable than your standard charging cord that tends to get frayed and, frankly, dangerous after long-term use. It also eliminates the need to constantly plug and unplug, which could cause wear and tear to the port on your device. Wireless chargers from reputable brands (like the ones we've recommended below) are also tested to prevent overheating and deliver the proper amount of wattage to charge your particular phone as fast as possible, so they can be safer in that regard, too.

Seamless, convenient, and clutter-free, it's hard to make an argument against wireless chargers. But before we jump into our favorite picks to fit your lifestyle, let's take a dive into what you need to know about wireless charging, beginning with the basics.

What kinds of devices work with wireless chargers?

Most wireless chargers have universal compatibility (often referred to as a Qi-compatible device or “Qi-certified”) for iPhone and Android smartphones, sans the newer MagSafe technology which we'll get into later. This means that everyone in your household should be able to use one wireless charging station for their devices as needed. Plus, when you have guests over and they need to power up, you can just direct them to the nearest wireless charger without worrying about finding a compatible cord.

Many wireless charging pads are also able to charge earbuds and Airpods while they are in their wireless charging case. Smartwatches like the Apple Watch and Samsung Galaxy Watch can be charged wirelessly as well, but the wireless charger will often need to include a special holder to hang the watch for a proper charge. 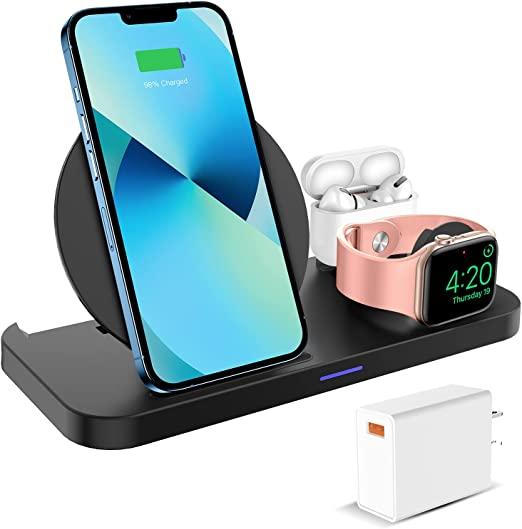 What is a wireless charger?

The idea almost seems to be too good to be true, right? Like, how does wireless charging even work?

Well, anyone who owns a rechargeable electric toothbrush with a charging base knows that the technology isn't brand new, but you might be surprised to find that it actually has quite a bit of history behind it. If we jump back in time for a moment, we'll find that this technology's roots go all the way back to Tesla. (No, not the cars; the electrical engineer and inventor, Nikola Tesla himself.) He demonstrated how electricity could be transmitted through the air to create a magnetic field between two circuits, aka magnetic resonant coupling. This was done more than one hundred years ago, but only now are we finding more widespread use for it.

When it comes to wirelessly charging our smartphones and similar devices, this usage of the technology consists of a wireless charging base that is then plugged into a wall outlet or other power source to obtain energy. In the simplest terms, these wireless chargers house copper coils that create an oscillating magnetic field that transmits a charge to compatible devices when they get close, without needing a cord to connect them.

In your search for the ideal wireless charger, you'll come across a few different styles. They all essentially do the same thing, but you may prefer one over the other depending on the way you use your phone while it charges.

What is a wireless charging pad?

The wireless charging pad is a great choice for people who like to "set it and forget it," though it's not ideal if you need to use your phone a lot while it's juicing up. It's best used for overnight charging, but keep in mind that if it will be in your bedroom while you sleep, you'll want one that doesn't boast a big glaring light while it's in use.

What is a wireless charging stand?

On the flip side, a wireless charging stand is a more versatile choice for multitaskers who would still like to obtain some use from their phone while it charges. These devices are designed to keep your smartphone propped up at a nice viewing angle so you can watch content, make video calls, or just generally use your phone as it charges. It also makes it easy to use your phone as a desktop clock if you utilize its always-on display. Some wireless charging stands are even made with a built-in Bluetooth speaker for additional all-in-one convenience.

What other types of wireless chargers are there?

Not only can you use a wireless charger on your desk or bedside table at home, but there are also wireless chargers for cars and wireless power banks to take this convenient technology with you wherever you go.

Will your phone charge wirelessly through a case?

If you use a protective or even just decorative case on your phone, you may be wondering if that will prohibit you from using a wireless charger. In most cases, you should be good, but the thinner the case, the better. However, if you like to use a phone grip of any sort on the back of your phone, you won't be able to use a wireless charger without removing that accessory or the case entirely. Same goes for metal or ultra-thick cases — it's not likely that the charge will be able to penetrate through that fortress of protection.

What is Apple MagSafe charging?

MagSafe is a newer Apple technology introduced to the mainstream alongside the iPhone 12. Sometimes it can be a little annoying to line up your phone on a wireless charger to get it to "catch" the charge, but not so with MagSafe wireless charging capability. Instead, these chargers are made with magnets that pull the phone perfectly into place. An Apple MagSafe charger also allows for safe, fast charging of Apple devices — a huge advantage over standard Qi-compatible chargers.

Generally speaking, the higher the wattage, the faster the charge, but Qi wireless charging often caters to quick-charging Android devices. This means that the output of wattage is often less when wirelessly charging Apple devices, regardless of the charger’s maximum watts. This is to prevent overheating the Apple device, but it leads to a slower charge.

The only downside to MagSafe chargers? You'll need to buy a compatible MagSafe case in order to use them, and you won’t be able to use standard Qi chargers when that case is on your phone. However, a MagSafe case also acts as a mounting system for other accessories like phone grips, cardholders, car mounts, and lots more, so it's a good investment. You can even find MagSafe cases designed for Android phones.

Now that you’re clued into the inner workings of this cool technology, we’ve scoured what’s out there and found the best wireless chargers for iPhone, Android, Apple Watch, wireless earbuds, and more. So read on and start envisioning what your life can look like when you finally cut all those cords.