This graphene battery pack is my new favorite portable charger

I love a good portable charger – I spend enough time on the go that keeping all my tech charged is an absolute nightmare. But until now, all battery packs have had one big issue: they just took way too long to charge. In a few years, we’ve gone from 5W charging in our mobile devices to over 100W in some phones. While all smartphones now include some form of fast charging, and battery packs themselves support fast charging output, this technology never really transitioned to charging the things that keep our tech charged on the go. What good is a battery pack that takes hours to charge, only to deplete with a few charges of your mobile device? This is where Elecjet enters the conversation with the Apollo Ultra graphene battery pack.

Elecjet – which just sold to Alpine 4 holdings who plans to add production sites in the US eventually, albeit we’re not sure if this includes this battery pack – has returned to Indiegogo with a product that sets the standard for portable battery packs.

I’ve used the Elecjet Apollo Ultra for a couple of months now. I have zero intention of ever going back to the battery packs I was using before. The Elecjet Apollo Ultra is a 37Wh (10,000 mAh) power bank that can be charged at 100W and outputs 87W across the USB-C and USB-A ports. By far, my favorite part – aside from the super-fast input charging – is the digital display that tells you the percentage. Still, when you’re charging, it also lets you see just how fast it’s charging by displaying the percentage to one decimal place. It also has passthrough charging, so you can charge devices while you charge the power bank.

Most power banks charge between 15W and 20W, although some go as high as 40W, but this is the fastest power bank I’ve ever had to charge. This fully charges its 10,000 mAh capacity within a couple of hours and is ready to go. Before using this, I used Samsung’s 10,000mAh USB-C wireless power bank, and I love that, but it now sits looking at me forlornly whenever I open the drawer it’s in. The Elecjet Apollo Ultra also makes me think graphene is the future to faster charging of traditional power banks, albeit it comes with its own set of caveats that we need to go into. 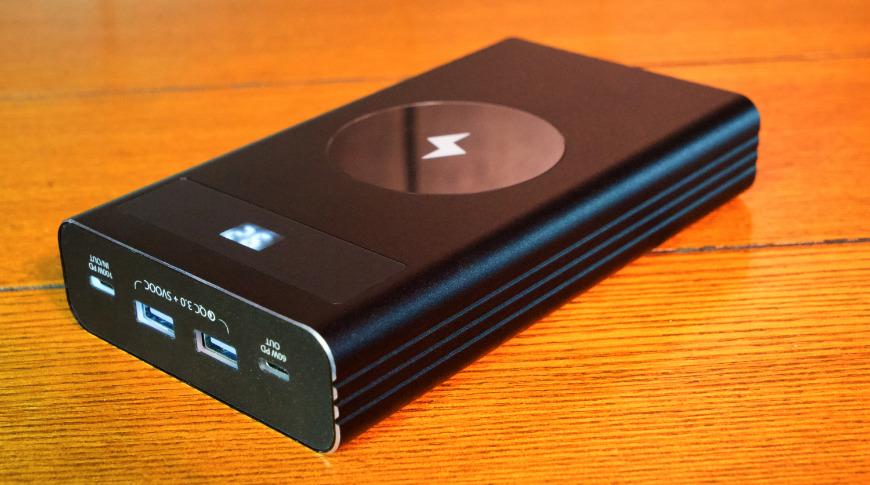 I spent almost a month in the hospital in September and October and wouldn’t have survived without the Elecjet Apollo Ultra. In the second room that I spent about ten days in, an entire bank of outlets didn’t work, so I was charging this once or twice per day and using it to charge all my mobile devices. Without the 100W fast charging, this wouldn’t have been possible.

I can’t begin to count how many times I’ve gone to leave my house and picked up a battery pack only to discover it was empty. The Elecjet Apollo Ultra solves this as charging it for 10 minutes is enough to charge my iPhone 13 Pro to full or Galaxy Z Fold 3 to a considerable amount. Regardless of which device I’m using, it ensures I have enough power to get through most of the day. This pre-production unit I’ve been using is limited to 87W input, so it takes about 37 minutes to charge to full, but the final retail unit should charge in full in just under half an hour. Either of those numbers is pretty insane for 10,000 mAh.

Elecjet Apollo Ultra: The bits to be wary about

The USB-C port can provide up to 65W of power, while the USB-A port supports 18W output. If your device supports the PPS power spec, it can output at 68.25W, but regardless of which devices you’ve connected, it doesn’t quite add up to the 87W that Elecjet claims.

At 10,000 mAh, the Elecjet Apollo Ultra also has a smaller capacity than we’d have liked to see. Ideally, I would have wanted a 55Wh capacity or even 70Wh, which would result in a bigger size but provide the capacity needed to power all the devices we use today. For example, the Apollo Ultra can only charge my Macbook Air to about two-thirds, and charging at the full 65W speed will deplete the battery in 35-40 minutes. It’s less of a problem than other devices as you can charge it quickly, and I’m yet to be in a position where I need the charger and it’s empty, but as we all return to traveling, it’s worth keeping in mind.

It’s also worth mentioning that Elecjet doesn’t have the best reputation amongst crowdfunding backers. Previous campaigns have left backer questions unanswered, and there were some quality assurance problems. Still, the Elecjet Apollo Ultra has been pleasantly surprising, and I have no doubts about the company’s ability to deliver on its crowdfunding campaign promises. If you’d rather wait, the company has a sizeable array of products on Amazon, so you can always wait for the Apollo Ultra to be listed there.

The Elecjet Apollo Ultra has changed what I expect from a portable charger. Instead of blindly accepting that I’ll have to judge the battery based on four or five LED lights and hoping it’ll charge quickly, I’ve now begun checking these two ‘specs’ as part of how I judge any portable charger. Similarly, any portable charger I buy or recommend now has these features: easy battery level indication and really quick charging.

The Elecjet Apollo Ultra is priced at $65 for Indiegogo backers, which is one of the more expensive portable chargers compared to the generally accepted

Edwards scores 25 to power Houston past UAB in NCAA opener