Take smartphone screen refresh rates. A few years ago they weren't even mentioned in the smartphone world. Now, they’re headline specs. Today, most flagships are rocking displays with at least 120Hz refresh rates, and even Apple is set to bring its ‘ProMotion’ 120Hz tech from the iPad Pro to the new iPhone 13.

You might not be fussed about refresh rates (or know if you should be), which is where this article comes in. We’ve rounded up everything you need to know about smartphone refresh rates, and whether 120Hz is really better, so that you can make more informed buying decisions when the time comes.

What does screen refresh rate mean?

When you’re watching something move on a screen, you’re actually looking at individual frames being displayed in incredibly quick succession, like a flipbook. The number of these frames being displayed per second is known as the frames per second, or fps count. Most films are traditionally shot at 24fps, while enthusiast gaming pushes the boundaries up to 240fps and above.

The refresh rate of a display is the rate at which a display refreshes itself to show you the next frame. Refresh rates are measured in Hertz (Hz), and the number refers to how many times per second a screen is able to draw a new image.

A 120Hz screen, for example, can refresh itself 120 times a second, and should therefore be smoother than a 90Hz or 60Hz screen, as you’re cramming more frames into the same period of time.

Not necessarily. It should be – but you’ll only notice a difference in media and games if the content you’re consuming is a high enough fps to take advantage of the refresh rate.

If you’ve got a 120Hz screen but you're only watching a 24fps film or playing a 60fps game, there’ll be little benefit to having a higher refresh rate screen. If you do have content that can take advantage of it though, you’re in for a smooth ride.

The fastest smartphone displays currently available have refresh rates of 144Hz. These include the Asus ROG Phone 3/5, the Lenovo Legion Duel and Duel 2, the Motorola Edge, and the Xiaomi Black Shark 4. 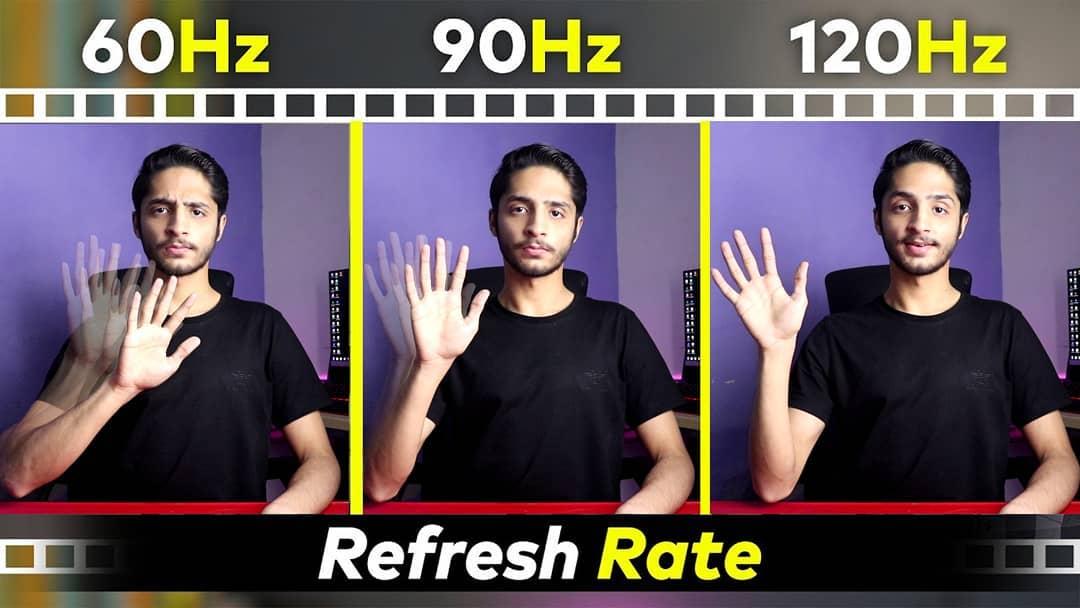 Currently, smartphone games make up the bulk of 120Hz content, and titles that can run at 120fps include Minecraft, Pac-Man, Brawl Stars, Plant vs Zombies 2, Call of Duty: Mobile and many more.

PC gaming enthusiasts will be familiar with the impact that faster refresh rates can have on content. High end systems are capable of pushing up to 240Hz or more, and the resulting buttery smoothness makes for a super slick, enjoyable experience that not only feels ultra responsive, but can give tightly matched professionals a competitive edge.

The latter will feel slicker, especially when scrolling through websites and social media feeds. Often, smartphone manufacturers such as OnePlus and Samsung will have optimised the phone’s software so that animations, scrolling, and the overall feel, will take full advantage of faster refresh rates.

Does a faster refresh rate use more battery?

The more often a screen refreshes, the more power it will consume. This means that if you're using your phone for simple browsing, reading, or consuming content at an fps lower than its refresh rate, you're wasting precious battery life for zero gain.

Thankfully, most manufacturers with high refresh rate handsets provide users with the option to lower the refresh rate down to 90Hz or 60Hz if they want to conserve the most amount of power.

But there’s another clever trick that’s becoming more common too. Manufacturers including Apple, OnePlus and Samsung have released devices which can automatically increase or decrease the refresh rate based on the content being displayed.

The OnePlus 9, for example, can automatically drop down from 120Hz to 1Hz when you’re reading text on a static page. On the iPad Pro, this feature is called Apple ProMotion (and is set to land on theiPhone 13), while on Samsung devices it’s called Adaptive frame-rate.

As more and more devices introduce this feature, the battery compromise associated with 120Hz and higher refresh rate-toting screens should be far less of a concern.

What’s the difference between refresh rate and touch response rate?

Touch response rate is a spec that’s cheekily being floated around by manufacturers more and more. We say cheekily, because we see it touted more often in mid-range handsets where — and this is pure speculation — consumers might confuse them with a screen having a higher refresh rate.

As for the difference this makes? Well, the higher the touch response rate the more sensitive the screen, but in all honesty, you’re unlikely to notice a difference with regular use, as modern screens are more than sensitive enough to provide a seemingly instant response anyway. So we think this spec can be a bit of a red herring.

When it boils down to it, a smartphone that has a screen with a higher refresh rate generally feels slicker and smoother to use. Will it revolutionise your phone experience? Perhaps not. In fact, many users may struggle to spot the difference without a side-by-side comparison.

A high refresh rate display is definitely a nice feature to have but we'd definitely rate the actual screen quality over the refresh rate in a list of features that are most important to us, not to mention battery life, usability, audio performance etc.

The good news is you soon won't have to choose one over the other, as even mid-range handsets are toting faster screens these days. Chalk this one up as more evidence of the slow but steady improvement in phone technology.

Overwhelmed with choice? Check out our list of the best smartphones

We've picked the best wireless headphones to save you the hassle

5 Ways That 3-D Printers Can Make You Cooler