What’s The Deal With Rolling Blackouts In California’s Power Grid?

A heat wave spreading across a large portion of the west coast of the United States is not surprising for this time of year, but the frequency and severity of these heat waves have been getting worse in recent years as the side effects from climate change become more obvious. In response to this, the grid operators in California have instituted limited rolling blackouts as electricity demand ramps up.

This isn’t California’s first run-in with elective blackouts, either. The electrical grid in California is particularly prone to issues like this, both from engineering issues and from other less obvious problems as well.

The physical problems with the electric grid are straightforward and covered often as part of the background noise of almost-forgotten issues with aging infrastructure systems as a whole. In a majority of North America, the electrical grid as well as roads, bridges, water and wastewater systems, airports, and virtually any other piece of infrastructure was largely built in the post-war boom following World War II and then essentially left to rot over the following decades. It takes a lot of maintenance to keep all of that infrastructure running, but it also takes political capital and a will to make sure that easily-forgotten things aren’t forgotten. As a result, maintenance budgets for virtually all infrastructure have been slashed resulting in several major catastrophes in recent years, as well as an uncountable number of smaller inconveniences that only signal an impending, slow collapse. 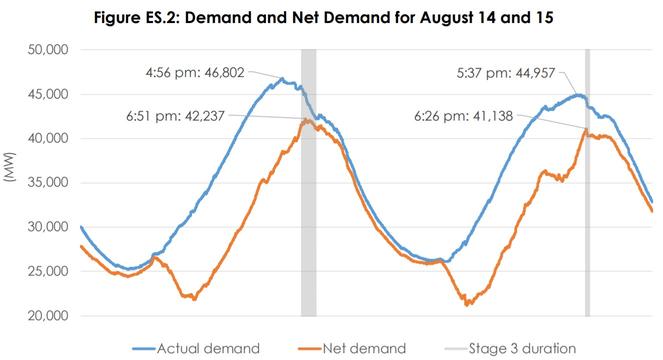 The electrical grid on the west coast of the United States is no exception. California experienced a population boom after World War II which continues to the present day. Most infrastructure problems, like elsewhere in the country, are only patched over while the entire system is barely upgraded to match demand. Anyone who has ever driven on a road in a major California city in the oppressive traffic will confirm this current state of affairs. When infrastructure is already taxed to its limits it only takes one straw to break the camel’s back. This straw was the Camp fire of 2018 which, while not the first or last wildfire caused by an issue with a power line, was one of the most devastating. In addition to causing the deaths of at least 85 people and burning down 153,336 acres, this fire also caused the bankruptcy of California’s (and the United States’) largest energy company, PG&E, which is still struggling to recover.

In fact, these blackouts aren’t the first (or likely, last) blackouts that California has seen even since the Camp fire. Last year a wave of rolling blackouts was instituted in northern California over the course of about a month as a result of increased fire risk. These more recent blackouts aren’t new, and unless a major overhaul of the grid is performed they will likely continue.

Sagging power lines may be a fire risk you haven’t considered before, but it’s one of threats at the front of grid operators’ minds right now. This year, California’s much hotter, drier summer has put additional strain on the electric grid as people ramp up use of air conditioning. However, more electricity on the stressed grid means more current in the wires, which means more resistive losses, which means that the wires expand more from that heat (not to mention the increased ambient heat from the heat wave itself) and they can sag into trees and other obstacles especially if the rights-of-way haven’t been maintained diligently. It’s a vicious feedback loop that puts a strained grid into a situation that can easily start fires, but is also the recipe for massive cascade failures like the Northeast Blackout of 2003. Despite this, efforts to upgrade the electric infrastructure are slow or non-existent. This is where we can start to see other non-engineering problems arise which are arguably worse.

Most reports of the recent rolling blackouts (pay wall warning) indicate that the power grid was not operating at a capacity that would have necessarily required them, however perhaps out of an abundance of caution due to the heat wave and California’s history of power-line-induced fires the system operator decided to curtail power temporarily. There are other reports of a sudden loss of generation due to a lack of wind at the time, as California pushes to move more of their energy portfolio to renewables, however the system operator would typically have backup generation ready to bring online at any given moment, such as combustion turbines, hydroelectric plants, or other power plants, rather than resorting to rolling blackouts. While it is feasible that a sudden loss of wind may have contributed to the problem it shouldn’t have necessitated blackouts to solve, and with the amount of wind that California relies on this shouldn’t have been the first time they would have seen a problem like this either.

It’s important to note here that the operator of California’s electric grid is the California Independent System Operator (CAISO) which is a nonprofit that controls the bulk electric transmission system and is not actually an electric utility or in charge of any energy generation. The reason California has a system like this is convoluted but goes back to the passage of various legislation in the ’90s, the creation of the Federal Energy Regulatory Commission (FERC), and several other political moves over the course of about 15 years. Not every state or area has an independent operator like California, but due to these FERC requirements, and compounded by the Enron scandal, most utilities that operate their own bulk transmission system must at least behave independently. Although not directly a part of the larger accounting scandal that Enron is known for, they played a major role in causing another set of rolling blackouts in California in the early ’00s.

It’s easy to see the latest blackouts in two lights, both one of a straightforward engineering problem that needs to be solved, but also as part of a broader historical and legal issue that has gone back decades in California and will continue indefinitely, especially as the effects of climate change appear more and more. In fact, California has already started on its wildfire season this year and it is only the beginning, both for fires and for issues for the electric utilities in the state.

Samsung Galaxy S21 vs S22: What's the difference and does it really matter?

Weekly news quiz: It's getting towards the end of the year. Are you still keeping up with all things news?