how to make a simple mobile phone charger

Why the clever tech in Oral-B's next electric toothbrush is the charger, not the brush

All the best features, news, tips and great deals to help you live a better life through technology

Thank you for signing up to T3. You will receive a verification email shortly.

There was a problem. Please refresh the page and try again.

Later this year, Oral-B will launch its next smart electric toothbrush, the iO10. And fascinating in two ways: not just because it includes something I've never seen before in an electric toothbrush system; but also because that clever tech isn't focused on improving how the brush itself works. Instead, it's focused on helping change your behaviour to get better results from the brushing tech that's already there.

This isn't a new idea – smart electric toothbrushes have been around for a few years that can track your movement and tell your phone how much of your mouth you've covered. But they all require you to have your phone in hand, watching the progress, if you want to make the most of them. If you're like me, you often just won't do this. Maybe you don't have your phone with you in the morning, maybe it just feels like too much hassle.

That's why I think the Oral-B iO10 (which replaces the top-of-the-range iO9 that holds a high spot in our list of the best electric toothbrushes) is so clever: it turns its own charger into a little map of your mouth using LED lights, providing real-time info about how well you've brushed at a glance. There are six zones – the top-left, top-centre, top-right, bottom-left, bottom-centre and bottom-right. 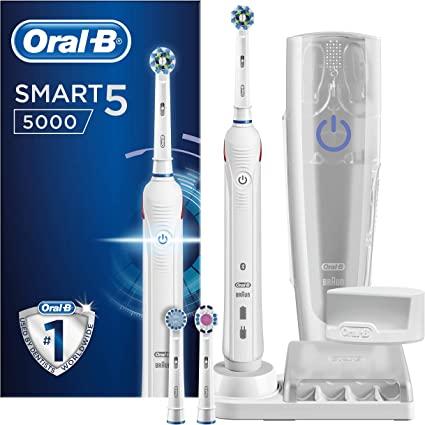 It's called the iOSense, and as you brush, the lights on it change, indicating whether you've covered that area well – so by the time you hit your two minutes, you'll know where you may have missed, and can just polish that part off as needed.

That's combined with Oral-B's smart pressure sensor, which doesn't just tell you when you're pressing too hard with a red light, but also tells you when you've reach the optimum pressure with a green light, which in my experience actually keeps you more engaged and focused on brushing technique.

"We work day in day out with dental professionals, and consumers and users.… People were asking us to come up with a device, a specific one, because they don't want to always pull out their mobile phone in their bathroom. You still have the iO app where everything is recorded, and you get feedback on each of your brushing experiences."

One thing I noted is that the app can map your brushing both inside and out on the teeth, while the iOSense just points to overall areas of the mouth. I wondered if oversimplifying the process would be a problem, but Binot pointed out that following any guide will be an improvement over not following one.

"We need to be quite simple on this device to make sure it sticks for the people when they use the products," he says. "And if you want more detail you still have the app on your phone where you have all the details. I think it is just different expectations. Here the idea is to interact as you brush, and of course as you brush, you cannot cope with too much information – so after a some study with our consumers we came up with this level of simplicity, which we believe is the right balance."

Binot has confirmed that what's inside the handles is the same across the whole new Oral-B iO range, including the microvibration tech that makes the brushes themselves effective. And they all work with the app. The key difference with the top-of-the-range iO10 is just the iOSense charging base, and how it makes it easier to keep track of what you've done.

In all cases, the point is that it's not enough to only use a good brush – you have to use it effectively. "When you use iO, you remove 100% more plaque than with a manual toothbrush, so it is meaningful, but of course you have to do it right," says Binot. "Making sure we improve the behaviour of the people is an important piece, and with our technology we can do it in a very rewarding and enjoyable experience for people."

I think the iOSense is a little bit genius – especially as the innovation here isn't a great new technological advancement, but instead is visibility, and just thinking about how humans behave in real life, rather than in an ideal world.

The iO10 is due for release in autumn 2022 (price TBC), with updated and affordable iO4 and iO5 brushes arriving before summer.

Poll: What do you think about the rumors of a flat-edged Apple Watch Series 7 design? Guides

Why in the year of our lord 2022 am I still getting robocalls???