how to make free energy mobile phone charger with magnets

Wireless charging to the power of three for Apple users

The StepUp has an ingenious design that features a solid base with a slanted top where your iPhone connects via the MagSafe magnets on iPhone 12 and 13 phones. Unfortunately, while you could charge any iPhone from the 8 and up, they don’t have the MagSafe magnets to prevent it from sliding off the slanted charging pad.

I did most of my testing with an iPhone 13 Pro which works well although, I would have preferred the magnets to be a little stronger. Also, it would help if the surface of the charging pad had a grippy texture to it rather than the glossy one it has. I never had the iPhone fall off and the large camera bump on the back also acts as an extra element to stop it from sliding off.

The StepUp has a blue ring of light to illuminate the base but it’s only visible in low light which is the way it should be. Then, there are two concealed charging pads on either side; press these in and they’ll pop out.

On the left is the pad for charging an Apple Watch. This is at the same angle as the main iPhone charging pad which means you can see what’s on your watch or phone at a glance. On the right side lower down is the horizontal pad for charging your AirPods although it will charge most Qi-compatible earbud cases.

The pop-out pads don’t feel particularly solid and there’s plenty of wiggle in them but I didn’t have any fear of them breaking easily. 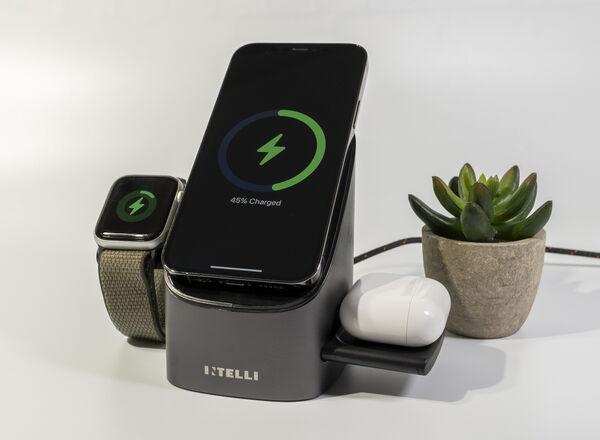 The iPhone charging base supports up to 15w of wireless charging but the real beauty of the StepUp is the ability to charge three devices simultaneously with just a single USB-C cable connected to the back.

If you only need to charge your iPhone then you can keep the other charge pads hidden inside the unit for a neater setup. This makes for a great setup for those with OCD or neat freaks who don’t like cables.

The pad for charging the AirPods works well but I did find the one for the Apple Watch required that I tightened the strap around it to ensure the watch stayed put while charging. Again, stronger magnets would help here but this isn’t a bid deal.

While you do get a cable with the StepUp, it doesn’t come with a charge adaptor. I used everything from 60w to 20w power bricks and they all worked fine but to get the most from this setup you’ll need a minimum of 20w.

Intelli StepUp Magnetic wireless charging station takes up less space on your desk than similar products or multiple chargers and is an excellent one-stop solution for Apple fans who own an iPhone 12 or above, an Apple Watch and AirPods. While the build quality could be a little better it works great as a nightstand or desk charger.