how to make a mobile phone charger circuit

Xiaomi has launched its much-awaited Xiaomi 11i devices in India, one of which comes with 120W hyper charge support making it the “fastest charging smartphone in the country” yet.

Xiaomi 11i HyperCharge specs and features

Xiaomi’s new smartphone is the first to feature the company’s proprietary 120W HyperCharge technology. The company explained during the launch event on Thursday that the device has Dual Charge pumps that adjust the volume and amperage for higher wattage intake. The voltage is lowered and the amperage is raised by these Dual Charge pumps to optimise the charging process.

The Xiaomi 11i HyperCharge also has a dual-cell battery structure that accommodates parallel charging in split cells and doubles the available input. There are also multiple tab windings (MTW) that helps extend the time of high current and supports real-time cell current and voltage monitoring thereby reducing the charging time.

The smartphone has graphene-based Li-ion batteries that allow better conductivity than other batteries and vapor chamber cooling for quick heat dissipation.

With such fast charging, safety is a big question. Xiaomi mentioned that its HyperCharge tech has been certified with TUV Rheinland Safe Fast-Charge System Certification and the device also has 34 charging and battery safety features in place covering everything between the charging path to the battery. There are also nine thermal sensors on the Xiaomi 11i HyperCharge that monitor real-time temperature on the device.

Speaking of battery longevity, Xiaomi said that its hyper-charging smartphone retains up to 80 per cent capacity even after 800 charge-discharge cycles as compared to the 60 per cent battery capacity retention after 500 charge-discharge cycles, typically seen on other smartphones”. The Xiaomi 11i HyperCharge can also be charged under extreme weather conditions and provides up to 12W charging speeds even at -10 degree centigrades. 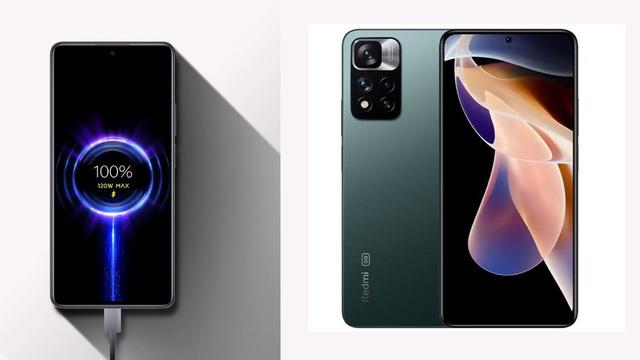 The devices have Dual 5G SIM support, WiFi 6 support, Truly Global 5G connectivity with support for eight bands. Both the smartphones have Virtual RAM expansion support and users can expand the RAM up to 32GB and storage up to 1TB with the Hybrid SIM slot. The Xiaomi 11i HyperCharge and Xiaomi 11i run on MIUI 12.5 Enhanced edition.

The Xiaomi 11i HyperCharge and Xiaomi 11i feature a flat-edge design with glass on both sides and Corning Gorilla Glass 5 for protection. There is the fan-favourite IR Blaster, a 3.5mm headphone jack, and IP53 rating.

For the camera system, the Xiaomi 11i HyperCharge and Xiaomi 11i feature a triple camera setup with a 108MP HM2 image sensor. There is also an 8MP ultra-wide camera sensor with a 120° FOV along with a 2MP macro sensor. On the front, there is a 16MP camera. The camera setup supports 4K video recording at 30 fps, multiple video modes and effects including VLOG modes.

The Xiaomi 11i HyperCharge and Xiaomi 11i are available in four colour options: Pacific Pearl, Stealth Black, Camo Green and Purple Mist, and they all have an Anti-Glare Matte finish.

Xiaomi 11i HyperCharge and Xiaomi 11i price and availability

The Xiaomi 11i has been launched in two variants -

TheXiaomi 11i Hypercharge has been launched in two variants as well -

Both the devices will be available from 12 January across Mi.com, Flipkart.com, Mi Home and Mi Studio, and authorised retail partners.

Also Read: Rs 653 cr fine due to disagreement on how to determine price of imported goods: Xiaomi

Your Voice: Strive for gender equality and help victimised women; the misery in Ukraine must end (short letters)