For 2021, Amazon has refreshed its tablet range making – as usual – very minor tweaks here and there as well as keeping the prices the same as ever.

This means new Kids Edition models, too. They’re based on the same hardware as the regular Fire Tablets, but bundle a protective case, a year’s access to Kids+ (entertainment, apps, books and more) and a two-year warranty that gives you a replacement if your child manages to break the tablet somehow.

What’s new this year is a second range of kids tablets called Kids Pro. Again, they use the same tablet as the usual Kids Edition, but come with a more grown-up looking case and new, more grown-up interface.

If you want to know how the tablet fares for a teenager or adults, read our full Fire HD 10 review.

The tablet itself shows its budget nature with an all-plastic body, but though it flexes a little, it feels sturdy when in its case.

The case, which comes in much more interesting colours and designs than the plain black one here, is practical. It offers protection from drops and rough handling, and a built-in stand folds out and clicks into place at an ideal angle for treating it like a mini TV. It can also be used as a carry handle.

The bezel around the screen is slimmer than we’ve seen from Amazon in recent years, meaning the device is a bit smaller while keeping the same 10.1in display as before.

It’s a good screen: bright and with vibrant colours. Kids won’t have any complaints about it whatsoever. The processor is fast enough to make the interface feel nice and responsive, but if previous Fire tablets are anything to go by, it could well slow down once hundreds of games are installed – as kids will undoubtedly love to do.

There’s 32GB of storage, which is fine for plenty of games, but you can also pop in a microSD card and have a total of 1TB if you want. Just bear in mind that some apps can only be installed to the internal storage and performance can be affected if you buy a slow-performing microSD card.

The case has little cutouts at the top and these direct the sound from the speakers towards you. They’re perfectly loud enough for watching videos and listening to music, but there’s also a headphone socket and Bluetooth: two options for silent entertainment.

Amazon actually sells a bundle including the tablet, child-friendly Bluetooth headphones and a screen protector, but this pushes the price up to a level you may begin to wonder if you should just spend more on an iPad. And you’d probably be right.

On the rear you get a 5Mp camera that’s as mediocre as ever (for both photos and videos) but the 2Mp front-facing camera is at least good enough for video calls, if little else.

Battery life is great: it should last 10-12 hours of watching videos, and less when playing games. Recharging is slow using the bundled 9W charger, but connect the USB-C cable to a higher-power adapter and it will charge up faster.

The key feature here is the new, grown-up interface. It’s much closer to FireOS than the younger kids’ version. It’s split into three panels: For You, where books, apps, games, films and music can be discovered.

The Home screen has a carousel of recently used apps, plus shortcuts to Videos, Stations, Web Videos, Books, Web Browser, Camera and a few other key apps. Below that are all the apps they have installed, or have access to.

Swipe across to the avatar and the child will see their profile, their remaining screen time, any goals to achieve that day (such as reading for 30 minutes before they can play games) and content that had been added to their profile by an adult. They can also change the wallpaper. 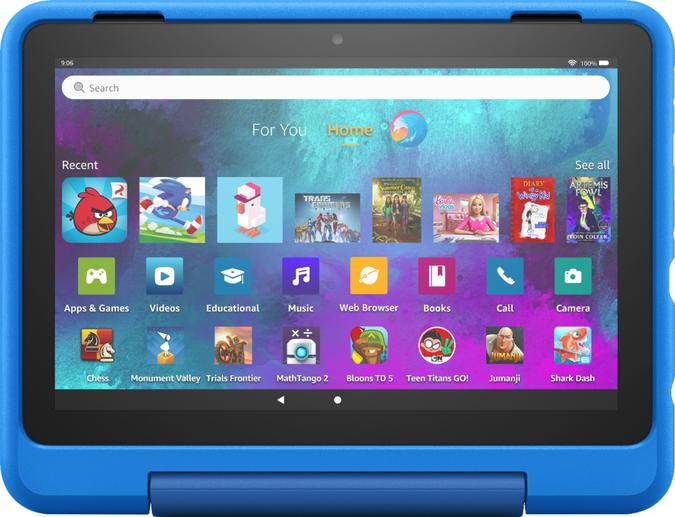 At the top is a universal search bar which will deliver results for websites, games, books and other content, but only what’s available to the child from Kids+ or because a parent has given access to specific apps, websites and other things.

The web browser offers two modes: hand-picked sites (the mode the younger kids interface uses) or an ‘open but filtered’ mode. The latter will only grant access to age-appropriate (or subject appropriate) sites, but you can use Amazon’s web-based Parent Dashboard to block certain sites that you don’t want your child to access.

The Dashboard lets you keeps tabs on your child’s activity on the tablet, but also offers remote control so you can disable web access at any time, grant or revoke permission to use the app store and add content to the child’s profile (such as digital books or videos you’ve purchased on your Amazon account).

Here you can also grant permission for your child to make announcements via Alexa (but not receive them) and to call approved contacts using either audio or video. Enabling these puts two extra icons on the Home screen but, despite the fact the tablet has hands-free Alexa, there’s no way to use Alexa beyond these two functions when using a child profile. It’s a shame Amazon couldn’t just enable the kid-friendly version of Alexa you get on the Echo Dot Kids.

Returning to the curated app store, kids can browse but they can’t install anything without your approval (if you choose this setup in the Dashboard). The problem is that you don’t get any notifications - you receive an email containing the request - so the child will probably come and ask you before you've seen the email. Then you can go to the Dashboard (shown below) and choose whether to let them install it.

The parental controls, as we’ve said in the past, are very good. You can set bedtime, which is the hours between which the child can’t use the tablet.

It’s a shame you can’t add any other periods during which access is blocked, as this would add more flexibility.

You can, of course, set a total amount of screen time. Once that’s used up, the tablet is unusable until the next day.

On top of that, you can set educational goals which stop the child playing games until they’ve read a book (or listened to one on Audible). Oddly, there are also ‘Using apps’ and ‘Watching videos’ goals, but there’s no way to specify which apps or videos they should watch.

Of course, these controls are limited to Amazon devices: they won’t stop the child watching Netflix on your TV or using any other devices they can access.

Normally, a year of Kids+ costs £48 / US$60 (for a single child), so you are getting good value given the Kids Pro tablet costs £50 / $50 more than the non-kids version and you get the case and warranty as well.

When Amazon rebranded the service from FreeTime (Fire for Kids in the UK) to Kids+ it also added a whole lot of content for older kids. Now, it’s obvious why: it needed that for the Kids Pro tablet.

The actual content available will depend upon the country you live in, but in the UK, there’s a good selection of popular video series including Victorious, The Loud House, Sam & Cat and others.

It will really depend upon what your child is expecting to see as to whether they’re happy, but there is loads of content. You can download videos, too, but it’s far from obvious that you have to tap and hold on one (instead of tapping to play it) to get the options menu that includes Download.

If you’re a Prime subscriber, then kid-friendly films will also be available on the tablet. Unfortunately, quite a few obvious ones don’t come up in a search, such as Despicable Me, The Lorax and The Gruffalo.

The only workaround would be to add the Prime Video app to the child’s content, but that’s not in the list of apps you can add. There’s also no search function for that list, which is a pain.

That’s £60 / $60 more than the Fire HD 8 Kids Pro which is basically identical except for a screen that’s two inches smaller.

If these are more than you want to spend, it’s worth noting that the regular Fire HD 8 and HD 10 include the Amazon Kids app and parental controls, so you can get an identical experience minus the case, warranty and Kids+ subscription for a lot less.

Given there are so many free good free apps and that you might already have a Netflix or Amazon Prime subscription, you may well decide that there’s no need to get the Kids Pro at all: that new interface isn’t exclusive to the kids’ version of the tablet.

See other recommendations in our roundup of the best kids' tablets.

Limiting screen time and ensuring your kids only watch, read and play appropriate things is increasingly difficult these days, but a Fire tablet – whether a Kids Edition or not – can really help to enforce those limits when you can’t supervise the whole time.

The HD 10 Kids Pro, as a package, is good value, especially if your child is 7 or 8 and can get a good few years’ use of it. Even if they’re a bit older, they can use the ‘Pro’ interface and then you can swap them over to the main adult interface when you think it’s appropriate, and it’s no longer a kids tablet.

The only snag, as ever, is that this isn’t an Android tablet and there are still some apps that you just can’t get in Amazon’s Appstore (such as YouTube).

Disney World’s 50th Anniversary: How the Parks Are Celebrating