The first Galaxy S22 Ultra drop test is already here, and you’re not going to like what you see in the video at the end of this post. The new Note in Samsung’s lineup features a glass sandwich design, with Corning Gorilla Glass Victus Plus protecting the phone’s front and back. The metal frame is made of Armor Aluminum, Samsung’s most durable aluminum version to date. Despite all of that, you’ll want to buy a case and a screen protector for the Ultra, as the phone might not be able to handle drops all that well.

The design details that matter

All three Galaxy S22 phones feature the same glass sandwich design, even the cheapest model. That means they all get the same Victus Plus and Armor Aluminum materials. But the Galaxy S22 and S22 Plus are not identical to the Galaxy S22 Ultra.

The latter has a screen with curved edges, rectangular corners, flat top and bottom sides, and rear cameras that protrude independently on the back. You’ll have to keep these Galaxy S22 Ultra design details in mind when watching the drop test below.

The Galaxy S22 and S22 Plus feature flat screens, curved corners, and a camera module that’s encased in metal.

All three phones have excellent durability, as we’ve seen recently. They’ll handle scratches and liquid immersion with no issues. And they don’t bend. But all of that isn’t a guarantee that the phones will survive all accidental drops. 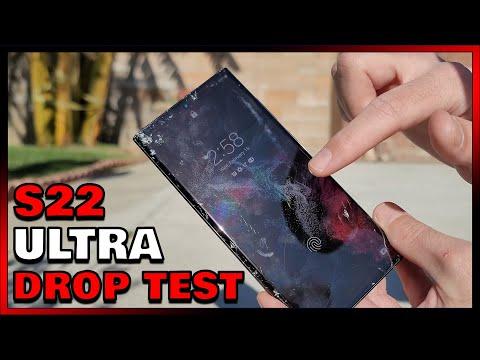 The height of the drop and the contact surface will influence the phone’s survival after such accidents. That’s something smartphone users can’t control. Therefore, putting a case and screen protector on the Galaxy S22 phones is something you should consider from the get-go.

The YouTuber used a brand new Galaxy S22 Ultra for the test and dropped the handset on concrete from various heights. That’s the usual experience for such videos. And flagship phones usually pass the first drops, which replicate a typical type of accident. You pull out the phone from a pocket or purse, and you drop it immediately.

You’d expect the Galaxy S22 Ultra to survive that first waist-high drop, and it does. But remember those protruding cameras? It turns out that not having any metal around the cameras to absorb some of the shocks might be a problem. The glass on two of the cameras shattered on the first impact in this test, which is something unexpected (image above). The phone’s back glass also got some scratches near the bottom side.

The YouTuber then dropped the phone on the bottom side and one of the corners. The Galaxy S22 Ultra sustained some scratches but no significant damage to the screen.

Finally, the drop on the side from the same height turned out to be fatal for the screen (image below). Again, the Galaxy S22 Ultra has a curved edge. The screen broke when that curved Victus Plus glass hit the concrete pavement. It would be interesting to see how the Galaxy S22 and S22 Plus handle the same type of drop, given that they have flat screens. The metal edge should handle that impact. But the drop test video only covers the Ultra.

What’s important to note here is that the phone continues to be operational. The display is cracked, as are a couple of cameras. But the fingerprint sensor and screen are functional.

The YouTuber then went for a drop from head high, following the same script as before. It’s in one of these drops that the Galaxy S22 Ultra screen received a fatal blow that destroyed the screen under the Victus Plus glass. Granted, the repeated shocks might have contributed to this outcome. But you should keep in mind that dropping the Galaxy S22 Ultra from this height could lead to the complete failure f the screen.

If you’ve purchased the Galaxy S22 Ultra or are thinking about preordering one, you should also invest in a protective case and screen protectors. Samsung offers plenty of credit that can be used towards such accessory purchases, so you should take advantage of it.