The iQOO 7 Legend was, err… Legendary! For mobile gamers looking to spend a reasonable amount on a high-end phone with top-tier features, it was our top recommendation for less than Rs. 50,000 in 2021. iQOO has now revamped it for 2022 in the form of the iQOO 9 Pro. It wears more of those BMW M motorsport colours, more camera hump, has more performance to offer, and costs more too. Starting at Rs. 64,990, the iQOO 9 Pro has now ventured into the full-blown flagship “iPhone territory”.

This means the phone has a lot more responsibilities on its shoulders than ever. To ensure that is evident, iQOO has given the iQOO 9 Pro a Quad HD+ LTPO 2.0 display, a beefed up triple camera system using last year’s high-end camera sensors, and a 120W fast wired charging solution along with a 50W wireless charging and 10W reverse wireless charging. On paper, almost nothing has been spared.

Is this then the hero flagship India has been waiting for this year? We have spent a few days with the iQOO 9 Pro and here’s what we think so far.

iQOO has always avoided the gaming-centric design on its phones and instead has always gone for a relatively saner look. The iQOO 7 Legend looks all racecar-inpsired with its BMW M stripes and the same happens once again on the iQOO 9 Pro. The “red-black-blue” stripes run across the phone’s rear, only to be interrupted by that MASSIVE camera plate! Yes, we are calling it a plate, not a camera hump! 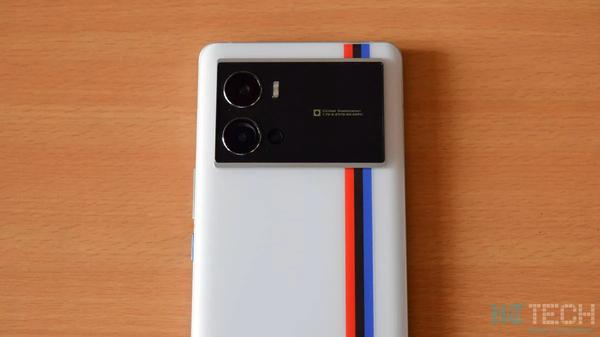 Does that mega camera plate have any functional value? It prevents any kind of wobble on the desk but other than that, there’s nothing. No secondary display for a viewfinder functionality, like the Xiaomi Mi 11 Ultra, or any additional sensors! This rectangular camera hump makes for a polarising design – some love it (like me) whereas others can’t stand it.

The matte white finish with the carbon-fiber etching pattern makes it nicer to touch as well. Since the price has gone up, iQOO has now given it a curved edge display similar to the high-end Vivo, Xiaomi, and Samsung flagships. iQOO does not say what kind of glass is used here but you get a pre-applied screen protector along with a matching BMW M-branded white silicon case. iQOO says the phone is IP52 certified, which means it can sustain occasional water splashes.

Since we touched upon the box, the iQOO 9 Pro also gets the 120W charger inside, along with some cool BMW cards depicting the DTM racecar from the company. Nobody does packaging the same way as iQOO.

The display has seen massive upgrades this year. It still measures 6.7-inches but now has an E5 10-bit AMOLED panel with LTPO 2.0 tech. This means the display can later the refresh rate between 1Hz to 120Hz based on the requirement of the apps. It looks good but not as vibrant as the display on an equivalent Samsung Galaxy S21. The ultrasonic fingerprint sensor is fast and way more reliable than the optical sensors we have seen so far.

The star of the show is the Snapdragon 8 Gen 1 chip, which is currently the best mobile chip you can find on a smartphone. Based on our usage so far, the Snapdragon 8 Gen 1 absolutely flies when it comes to gaming or doing basic tasks. Note that we observed the iQOO 9 Pro to heat up after some intense gaming but it did not have any effect on the game’s performance. Moreover, the Snapdragon 8 Gen 1 chip is still new at this point and many games are yet to be optimised to take full advantage of the chip. Case in point is F1 Mobile Racing, which runs on the lowest settings as of now. However, Call of Duty: Mobile and BGMI run in the best of ways.

For the second year in succession, iQOO relies on Vivo’s FunTouch OS 12 based on Android 12. We weren’t a fan of FunTouch OS 12 on the Vivo V23 Pro and nothing changes for us on the iQOO 9 Pro. The interface still feels like half baked and there is a lot of bloatware onboard. Advertisement notifications from the iQOO Browser are spam up the notification center – this is despite not opening the browser ever. This, along with a few bugs and occasional crashes are also a part of the iQOO 9 Pro. iQOO also says that buyers can expect two Android OS updates, which is much less than the four OS updates on Samsung Galaxy S22 series and six OS updates on the iPhone 13.

Note that our unit was running on a pre-release version of the OS and iQOO says a final polished version will ship with the units that customers will get. Hence, finger crossed until this update lands.

While the software experience is still a disappointment, iQOO makes up for it with a stellar camera setup. The iQOO 9 Pro gets a 50MP Samsung GN5 5-axis Gimbal assisted sensor for the main camera. This is accompanied by another 50MP ultra-wide camera and a 16MP Portrait camera with 2.5X optical zoom. Based on the limited time we have spent playing with it, the iQOO 9 Pro is easily the best camera phone we have seen this year. Whether in daylight or night, the camera never fails to impress with its colours, sharpness, details, and stability. More on this in our full review.

Battery life on the iQOO 9 Pro has been good for a phone of this class. The 4700mAh battery runs out in less than a day with moderate to heavy use. Then again, it has to run the Snapdragon 8 Gen 1, a 2K 120Hz display, and some powerful cameras. The 120W Flash Charge is a boon, filling up the battery from 10 percent to 100 in the same time it takes me to have a bath. There’s 50W wireless charging too but it only supports 10W speeds on regular Qi wireless chargers.

It is now a full-on flagship! The iQOO 9 Pro has all the bells and whistles that enthusiasts seek from an uncompromised flagship smartphone! Based on the limited time we have had with it, the phone has left us spellbound with its cameras, performance, and its charging technology. That said, there are a few rough edges and we need to wait and see whether iQOO fixes them before our full review goes up.

Starting at Rs. 64,990, the iQOO 9 Pro is irresistible considering all that it offers. But once again, we recommend you keep an eye for our full review so that you make the clever choice.

17 Reasons You Should Be Following Jamie Campbell Bower On Twitter