how to remove a broken screen protector

My Samsung Galaxy Fold screen broke after just a day

Look closely at the picture above, and you can see a small bulge right on the crease of my Galaxy Fold review unit. It’s just enough to slightly distort the screen, and I can feel it under my finger. There’s something pressing up against the screen at the hinge, right there in the crease. My best guess is that it’s a piece of debris, something harder than lint for sure. It’s possible that it’s something else, though, like the hinge itself on a defective unit pressing up on the screen.

It’s a distressing thing to discover just two days after receiving my review unit. More distressing is that the bulge eventually pressed sharply enough into the screen to break it. You can see the telltale lines of a broken OLED converging on the spot where the bulge is.

Whatever happened, it certainly wasn’t because I have treated this phone badly. I’ve done normal phone stuff, like opening and closing the hinge and putting it in my pocket. We did stick a tiny piece of molding clay on the back of the phone yesterday to prop it up for a video shoot, which is something we do in every phone video shoot. So perhaps a tiny piece of that snuck into a gap on the back of the hinge and then around or through its cogs until it lodged in between the screen and the hinge. It’d be sort of like Charlie Chaplin getting caught in the gears in Modern Times.

Or maybe something got in another one of the little gaps somewhere else. Or maybe it was pieces from the hinge itself breaking loose and working their way up into the screen. I don’t know. I just know that the screen is broken, and there was no obvious proximate cause for the bulge that broke it. I certainly haven’t used it on a beach or shook it in a bag of chips or anything wild. Just normal use.

We’ve seen worries about scratches on expensive phones and debris breaking the keyboard on expensive MacBooks, but a piece of debris distorting the screen on a $1,980 phone after one day of use feels like it’s on an entirely different level.

I reached out to Samsung right away to get a statement, but it took about 24 hours for the company to put one together. Here it is, and the gist is that Samsung is looking into our unit and also warning users not to try to peel off the protective layer on the top of the screen.

Also, I have, however, received a replacement review unit from Samsung. I think the first one is on a jet to South Korea for Samsung’s engineers to take apart and diagnose.

By the way, it appears I’m not the only reviewing the phone who has had a problem with the screen. Here’s Steve Kovach:

After one day of use... pic.twitter.com/VjDlJI45C9

Mark Gurman of Bloomberg also broke his, but that’s perhaps because he removed a protective layer that looks like a screen protector, but definitely isn’t meant to be removed. 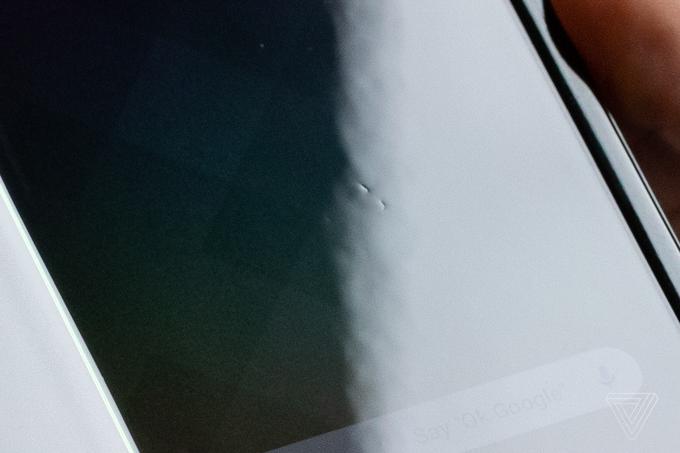 The phone comes with this protective layer/film. Samsung says you are not supposed to remove it. I removed it, not knowing you’re not supposed to (consumers won’t know either). It appeared removable in the left corner, so I took it off. I believe this contributed to the problem. pic.twitter.com/fU646D2zpY

And here’s Marques “MKBHD” Brownlee confirming he, too, had to get a replacement unit after peeling off the outer layer (which, again, wasn’t our issue):

PSA: There's a layer that appears to be a screen protector on the Galaxy Fold's display. It's NOT a screen protector. Do NOT remove it.I got this far peeling it off before the display spazzed and blacked out. Started over with a replacement. pic.twitter.com/ZhEG2Bqulr

It looks like retail units of the Galaxy Fold will include a warning about not removing the protective layer, but review units don’t seem to have included this one:

Dear future #GalaxyFold owners, I know I always say "No one ever read the instructions"... PLEASE READ THIS ONE!!!(This is the wrap over the screen of the Galaxy Fold) pic.twitter.com/LuQPRfDZIE

Like everybody else, I said in my original hands-on with the Galaxy Fold that I absolutely am able to see the crease between the two sides of the screen. But when I’m using the phone, I don’t actually notice it much. It’s easy to talk about it as a small first-generation compromise you have to make for what is otherwise a wonder of engineering: a tablet that folds in half.

Another thing people are worried about is the plastic screen scratching or picking up nicks easily. There are already a couple of minor dings on my unit, but they’re minor enough that I didn’t see them until our photographer zoomed way in to show them to me. If you look closely at the edges of the screen, there’s a sort of built-in screen protector on the front of the device. Samsung calls it a “polymer layer.” It is not designed to be removed. (Please don’t try it if you get your hands on a Fold.)

But while the crease and the nicks feel like compromises you could live with, a mysterious bulge that breaks the screen is something else entirely — especially one that appears just a day after pretty normal use. It’s a problem that is unacceptable on a phone that costs this much.

Every phone with movable parts is going to have more points of failure than a fully sealed, static phone. So it’s natural to say that you need to treat it with more care than usual. Before I saw this bulge, my impression was that this phone was much more durable than I expected. The hinge always felt solid and well-built. That impression of (relative) durability is obviously as broken as the flexing screen now.

If I’m right and it’s debris, it means that not only do you need to treat your phone with care, but you also have to worry about stuff getting in underneath the screen. If I’m wrong and it’s some kind of defect in the hardware, well... then we’re in entirely different territory. Either way: yikes.

Hopefully Samsung lets us know the results after it takes my original review unit apart to see what happened.