do i need a screen protector for pixel

Apple announced its new ‘iPhone SE’ model yesterday, the so-called iPhone SE (2022). Needless to say, this device fits into the latest smartphone lineup as the most affordable one. It is considerably more affordable than the iPhone 13 Mini, and yet it has the same SoC on the inside. That being said, we’re here to compare the Google Pixel 5a vs Apple iPhone SE (2022). This comparison sure makes sense.

The Pixel 5a is Google’s mid-range smartphone, for those who are on a budget. Even though it is considerably larger than the iPhone SE (2022), it is still considered to be somewhat compact, at least compared to a lot of its competitors. These two phones are immensely different, so comparing them will be really interesting. We’ll first list their specs, and then move to various other sections. Let’s kick off the Google Pixel 5a vs Apple iPhone SE (2022) comparison, shall we.

The moment you lay your eyes on these two devices, you’ll realize how different they are. Not only do they look different, but different materials are used here. The Pixel 5a 5G comes with an aluminum frame, which goes all the way around the phone, except for its display, of course. The iPhone SE (2022), on the other hand, comes with a frame made of aluminum, but it also includes a glass back.

The iPhone SE (2022) has rather thick bezels above and below the display, and it also includes a dedicated home button. The Pixel 5a 5G bezels are much thinner, but the device does have a display camera hole in the top-left corner. They look completely different because of this. The Pixel 5a 5G’s camera island is noticeably larger, as the phone includes two cameras on the back, not one like the iPhone SE (2022).

Apple’s device is considerably lighter than the Pixel 5a 5G, while it is also a lot shorter, narrower, and slightly thinner. It does have a much smaller display, though, so not even those thick bezels make it taller. Both smartphones are IP67 certified, so you’re getting at least some water and dust protection here. Both devices do feel premium in the hand, but the Pixel 5a 5G definitely looks more modern. Apple basically recycled the iPhone 8 design from 2017.

The Google Pixel 5a features a 6.34-inch fullHD+ (2400 x 1080) OLED display. This is a 60Hz panel, which does support HDR content. We’re looking at a 20:9 display aspect ratio here, and the panel is flat. Corning’s Gorilla Glass 3 protects this display, and the phone offers a display aspect ratio of around 85-percent. 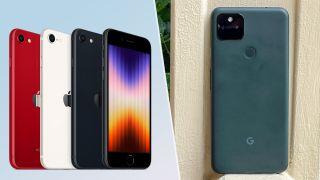 The Apple iPhone SE (2022) includes a 4.7-inch HD+ (1334 x 750) Retina IPS LCD display. This display is flat, and it’s a 60Hz panel. So neither phone has a high refresh rate display. This panel gets up to 625 nits of brightness, maximum. Apple says that the phone’s display is protected by “Ion-strengthened glass’. This panel offers a 16:9 display aspect ratio, and has a screen-to-body ratio of around 65-percent.

We’re very familiar with both of these panels, and they both look good, but the Pixel 5a 5G does have an advantage here. Its display is newer, and sharper than what the iPhone SE (2022) has to offer. An HD+ display in 2022 doesn’t really look like a great deal. The Pixel 5a 5G’s display also looks better in person, which is not surprising. Don’t get me wrong, though, the iPhone SE (2022)’s display is still good, though. Considering how small it is, the HD+ resolution is not exactly a huge problem, while it does get bright enough. The colors are good, even though this is not an OLED panel. But once again, it’s definitely a step below the Pixel 5a’s panel.

The Pixel 5a is fueled by the Snapdragon 765G SoC. That is still quite a capable processor, but it certainly is not one of the more powerful ones in the market. It was a mid-range processor when it launched quite some time ago. It is paired with 6GB of LPDDR4X RAM and 128GB of storage.

The iPhone SE (2022), on the flip side, may have a design from 2017, but it technically has the most powerful mobile chip on the market, at least when it comes to smartphones. The Apple A15 Bionic is Apple’s latest and greatest chip, a processor that fuels its iPhone 13 flagships. Apple paired that with 3GB of RAM and 64GB, 128GB, or 256GB of NVMe storage. That combo, in combination with iOS 15.3 and an HD+ display will result in an outstanding performance on the device.

Google’s Pixel 5a still performs really well, but it cannot compete with the iPhone SE (2022). That processor inside Apple’s latest smartphone humbles the Snapdragon 765G. Gaming on such a small display may prove to be difficult, though, but you certainly can, if you want. It will run demanding games better than the Pixel 5a, that’s for sure. For everyday performance, though, both phones will serve you perfectly fine.

Battery life is quite important to many of you, which is completely understandable considering that we carry our phones with us everywhere, and how important they are these days. Well, we still don’t have specific battery life numbers from the iPhone SE (2022), but we have a really good idea of what to expect. Let’s start with the Google Pixel 5a, though, as we’ve thoroughly tested that phone.

The Pixel 5a offers a 4,680mAh battery, and outstanding battery life. It is one of the best battery life smartphones that we’ve tested in a while, especially when it comes to mid-range devices. We were able to get around 7 hours of screen–on-time from this smartphone, and even go well beyond that point on occasion. The iPhone SE (2022) will have a really hard time competing with that, to say the least. Apple didn’t announce the official battery capacity of the device, but we’re assuming it has a similar battery pack to its predecessor, if not the same one. It has the same body, and that goes for thickness as well, so… there you go.

Unfortunately, the iPhone SE (2022) not only kept the iPhone 8’s body, but its main camera as well. It will, without a doubt, offer better camera performance than the iPhone SE (2020), mainly thanks to the Apple A15 Bionic, but not even that chip can perform miracles. Apple didn’t include a Night Mode here, despite the fact it could have. It did the same thing with the iPhone SE (2020), so don’t expect great low light shots. At the time of writing this article, the iPhone SE (2022) camera samples are still not available (except official ones, but I never take those into account), as nobody got a chance to check out the phone yet, pretty much. So we’re basing this on what the phone offers in both hardware and software sense.

The Pixel 5a also has a secondary camera on the back, a 16-megapixel ultrawide camera. That camera offers a 119-degree FoV, which is not extremely wide. Still, if you want a wider shot, this camera does a really nice job. All in all, it does provide you with some versatility. The Pixel 5a’s front-facing camera is also expected to do a better job overall.

Both smartphones do have stereo speakers. The iPhone SE (2022) seemingly doesn’t bring anything different in that department compared to its predecessor. So, taking that into consideration, the Pixel 5a speakers should sound a bit better. Don’t expect miracles, here, though, as neither of these two phones has the best speakers out there. They don’t sound bad on either phone, though, and most of you will be happy with what you’re getting.

From MW to GW lines: The safest way to scale up