The Galaxy S22 is Samsung’s entry-level phone in the new flagship lineup that packs in a solid punch. Although it lacks the super high-end features of the Galaxy S22 Ultra or the gigantic screen of the Galaxy S22 Plus, it delivers in one key aspect- value for money.

The Samsung Galaxy S22 offers the latest Snapdragon 8 Gen 1 SoC, the same chipset powering the other beefed-up S22 variants. What’s more, the display and camera module are the same as Galaxy S22 Plus, and the best part, it is $200 cheaper than the next Galaxy model.

The Samsung Galaxy S22 is not for everyone, though. The phone pales in comparison to the Samsung S22 Ultra specifications. However, if you want a smartphone with great features that can handle day-to-day tasks with ease, take great pictures, and offers a solid battery backup, the Galaxy S22 might be just the right phone for you.

The base model of the Galaxy S22 starts at $799 and is available with all major US retailers, including Best Buy and Amazon. You can even order the phone directly from Samsung.com.

If you own an older Samsung phone such as Galaxy S21 or the Note 20 Ultra, there are some great trade-in programs at select locations as well.

The Galaxy S22 has a unique design. It is one of the most compact flagship phones featuring Android. Instead of opting for a curved display, Samsung has opted for a flat display this year which is a welcome step in our view. 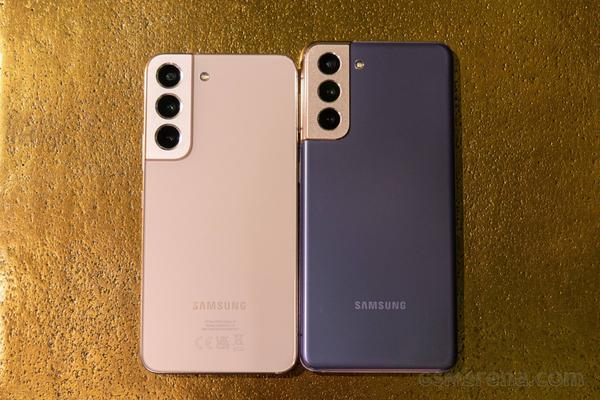 The 6.1-inch AMOLED panel is bright and crisp, ideal for consuming content. There’s nothing to complain about with a pixel density of 425 pixels per inch and a refresh rate of 120 Hz. Suppose you want to set the display to refresh at a lower rate of 60Hz to preserve a bit of battery. The panel also supports HDR10+ content, making watching movies and videos a treat.

There is a punch-hole 10-megapixel camera on display, but it is less intrusive than you might think.

Unfortunately, the frame of the Samsung Galaxy S22 is made from Aluminum with a glossy finish rather than steel. The volume rockers are on the right, while the Sim card tray and the USB C charging port are located at the bottom. Overall, the handset seems premium to hold, and thanks to its flat screen, you can easily find screen protectors that will guard the screen.

On the downside, there is no expandable memory option as there is no micro-SD card slot, and there is no headphone jack, pretty much standard stuff these days. It’s ironic, though, that phones under $100 have a headphone jack, and absolutely no premium phone does, but that’s a discussion for some other day!

Samsung has brought back the S-view case with the Galaxy S22 this year. It is a flop cover with a small window for the always-on display.

The Galaxy series of phones have never taken a backseat when it comes to the camera department. The Galaxy S22 does not disappoint either. The main shooter is a 50MP camera, a 12 MP ultra-wide, and a 10MP telephoto camera in the array. Although the quality of the photos is excellent when it’s bright, the camera struggles when it comes to low-light and indoor light conditions.

The S22 still pumps up the color saturation in true Samsung legacy, but the images are still sharp and perfectly usable.

The Snapdragon 8 Gen1 chip makes everything on the phone seem buttery smooth. The chipset is not available in the Google Pixel 6 specs, one of S22’s direct competitors. There is no lag whatsoever when browsing through the UI or opening and closing applications. The 8GB RAM is more than enough to handle multiple apps easily.

It should be noted that the Snapdragon 8 Gen1 chip is not available in all countries. Apart from the US and a few other countries, the Galaxy S22 comes with an Exynos 2200 chip.

The battery on the S22 is a small-ish 3700mAh, which is a bit too small for people who are heavy users. For comparison, the Samsung Galaxy S22 Plus has a 4500 mAh battery, while the Samsung S22 Ultra specifications include a massive 5000 mAh battery. Google Pixel 6 specs include a larger battery of 4614 mAh that edges out the S22.

If you frequently play games, watch videos and browse social media apps, you should expect a screen on time of about 3-4 hours. The good news is that the phone comes with a 25W fast charger that can recharge the phone from 0 to 100% in about 50 mins.

The Galaxy S22 puts Samsung in a weird position this year. While the price of the newer version is the same as last year’s Galaxy S21, it has a slightly smaller display and a worse telephoto lens.

The biggest competition for Samsung Galaxy S22 is the Google Pixel 6, significantly cheaper (starting at $600) and has a superior camera system. The competition between S22 vs. Google Pixel 6 is heavily one-sided when it comes to software. The Pixel 6 comes with a vanilla version of Android that is customized to give the best possible performance.

However, the battle between S22 vs. Google Pixel 6 is a tie in the premium feel and performance.

That said, if you are looking for a flagship quality phone that is compact, has great performance, and you haven’t changed your phone in over two years, then S22 is for you.