When it comes to tablets, Apple has been the dominant player in the segment for years. The iPhone 13 maker launched multiple iPad models across different price points catering to the needs of many. Android manufacturers, on the other hand, struggled to even play catch up. Samsung, however, is one company that has been regularly launching tablets under its A-series and the premium Tab S-series. The company’s latest premium range of tablets is the Samsung Galaxy Tab S8 series, which was launched in India alongside the Samsung Galaxy S22 series.

The USP of the Galaxy Tab S8 Ultra is its screen. The tablet is unusually large with a 14.6-inch display that is bigger than my 13-inch MacBook Pro, which I have been using as my daily work machine for years. I have used some tablets in the past, with the iPad ninth-generation being among the recent ones. However, none of them has been as big as the Galaxy Tab S8 Ultra.

Prior to using the tablet, I had several questions around the overall form factor and if it does actually make any sense to buy a 14.6-inch tablet. My perception changed after I started using the Samsung Galaxy Tab S8 Ultra as my media consumption device.

I watched All of Us Dead and Inventing Anna on Netflix during my Samsung Galaxy Tab S8 Ultra review period. Not going to lie, the tablet does make you feel as if it is your personal theatre that you can carry anywhere. Be it in my bedroom or during my flight from Bangalore to Mumbai, the Galaxy Tab S8 Ultra was used to binge-watch shows on streaming platforms. As with most OLED screens, you get vibrant colours that look pleasing to the eye. Adding to the multimedia experience is the quad-speaker setup that is among the best I have ever used on any tablet. The display isn’t the brightest at under 400 nits but you would not have to squint your eyes to read something on the tablet even under outdoor lighting conditions.

I was kinda suspicious about how comfortable and convenient would it be to carry such a huge tablet. While it does consume a lot of space given the footprint, it is quite thin and lightweight in comparison. The Galaxy Tab S8 Ultra weighs 728 grams and is only 5.5mm thick.

There is no compromise on the build quality either. The body is made up of what Samsung calls Armor Aluminium. At the top edge, there’s the volume button and power key. I would have liked the placement to be slightly more on the left for better reach. Also, the volume buttons, although click-y, are too small. Many times, I mistakenly pressed the power button assuming it to be the volume up button. A minor inconvenience but it is what it is.

There is a dual-camera setup on the back for wide and ultrawide shooting that is more than good enough to scan photos. Below the camera module is a black magnetic strip that holds the S Pen. Alternatively, you can also keep the S Pen on the top and bottom edges of the Tab S8 Ultra when held in horizontal orientation. And you will hold the tablet horizontally 99.9 per cent of the time due to its 16:10 aspect ratio and that tiny bath tub-like notch on the top bezel. It has two 12MP sensors that are quite good for video calls and occasional selfies.

S Pen and Back Cover Keyboard

While we are at it, I would not mind saying that the Samsung Galaxy Tab S8 Ultra is the best device for the S Pen. The 14.6-inch canvas offers more than enough screen estate for those into sketching or doodling. What makes the combination even better is the 2.8ms response time, which might often make you feel like you are writing or drawing using a pen/ pencil on paper. Like the Samsung Galaxy S22 Ultra (Review), the Tab S8 Ultra gets a bunch of S Pen features.

For starters, there is an option to convert my poor handwriting to text that is a lot more presentable. You can also perform some air actions to initiate tasks. These include going back to the home screen, opening the camera app and clicking a photo, etc. I might not be the best artist to use the S Pen to its full potential but for those who draw, sketch or are hobbyist doodlers, this one would certainly not disappoint. 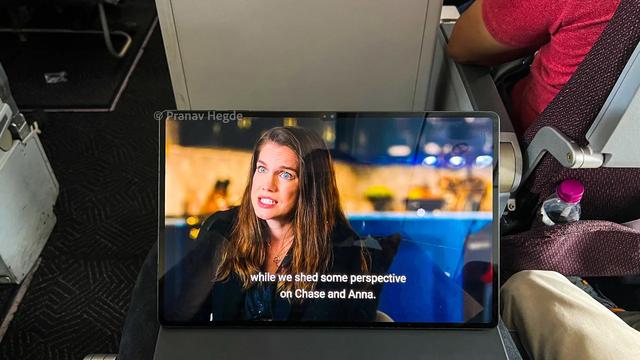 The bottom edge of the tablet (of course, when held horizontally) has magnetic pins in the centre for connecting the keyboard cover. This brings me to the productivity side of things. Alongside the Samsung Galaxy Tab S8 series, the company launched a book keyboard cover that can be attached to the magnetic pins and connected via Bluetooth. You also get a magnetic kickstand that can be used to tilt the Tab S8 Ultra as per your preference.

While the rear stand offers good support, I have one complaint about the keyboard case. There are multiple instances of the keyboard case detaching itself from the magnetic pins of the Galaxy Tab S8 Ultra, which led to the tablet falling down. Fortunately, the tablet’s display did not crack due to the fall. Samsung could have offered more pins in the centre or perhaps added more magnetic strips on the left and right side of the bottom edge as well for the tablet to stay attached magnetically. You will experience this multiple times as the overall setup will be top-heavy.

With regards to the overall quality of the keyboard, it is quite nice. Points to Samsung for offering backlit keys, something that is missing on some laptops priced around Rs 50,000 in India. The key travel is pretty decent and the glass-coated touchpad too does a decent job. I would have loved to see a slightly larger trackpad, probably because I am used to the MacBook Pro’s large trackpad. However, most users would be okay with the overall size.

Samsung has packed top-of-the-line hardware in the Galaxy Tab S8 Ultra. You get a Snapdragon 8 Gen 1 processor, which means there is no room for any lag while playing games or performing any day-to-day tasks. I played many games on this one, including Asphalt 9 Legend, which is so much fun to play on the tablet. The large slate offers an immersive gaming experience. In case you are wondering, no, there wasn’t any major heating issues that we experienced during our Samsung Galaxy Tab S8 Ultra review period. There are reports of Samsung throttling down the performance on certain popular apps under its Game Optimisation Service (GOS). However, I did not notice any issues in terms of performance during my review period.

In terms of software, the Galaxy Tab S8 Ultra boots Android 12-based One UI 4.1 out of the box. OneUI is among the most polished skins available for Android devices that comes with smooth animations and a ton of features. However, most apps are not optimised for the large form factor. The Twitter Android app, for instance, is basically a stretched version of the mobile app, making everything look unusually large. The same is the case with the Instagram app. Select apps like Disney+Hotstar loaded in portrait/ vertical orientation. Hopefully, Samsung works with app developers, especially for popular apps.

Meanwhile, users can make use of DeX mode as a middle ground. It was the first time that I was using DeX mode, which will essentially provide a Windows laptop-like interface. There is a dock at the bottom with the apps you set as per preference. You also get icons of the apps you use on the home screen in DeX mode.

You can open multiple apps in this mode and then resize the window as per your liking. This also helps you look at multiple apps at the same time when they are kept open simultaneously on the same screen. Interestingly, the response time for gestures through the trackpad was a lot quicker in DeX mode compared to the regular mode. This suggests that Samsung wants you to switch to DeX mode when you have attached the keyboard cover to the tablet. The tablet is promised to get four years' worth of software upgrades and five years of security updates, which will be appreciated by those who intend to use the tablet for years. And it should be the case as most of us do not upgrade our tablets as frequently as our smartphones.

Despite being only 5.5mm thin, the Samsung Galaxy Tab S8 Ultra packs a beefy 11,200 mAh battery. That is also possible because of the large form factor that the tablet sports. Based on my use case, the tablet lasted for seven hours and thirty minutes at max. This is the screen-on time (SoT) and the overall battery might last for more than a day based on your use case. Since the display is not an LTPO panel, it remained constantly at 120Hz, thereby consuming slightly more battery. Also, the display brightness was set to almost full during my Samsung Galaxy Tab S8 Ultra review period.

The tablet also supports 45W fast charging and much like its smartphones, Samsung did not provide the charging adapter in the box. I used AMX’s XP60 to charge the tablet at 45W and it took slightly over an hour and 30 minutes to recharge the battery completely. This one time when I was typing a review on the Galaxy Tab S8 Ultra while charging the device, it took about two hours to charge completely.

So, is the Galaxy Tab S8 Ultra worth buying? The answer will differ based on what you want from the tablet. In case you want a top-notch multimedia experience, this one is a no-brainer. The large screen and keyboard cover setup also sort of answers the question of whether a tablet + keyboard cover can replace your laptop as a daily work machine. The answer is not straightforward as some services like my employer’s CMS did not work well. On the other hand, if your workflow includes only typing on Microsoft Word, making PowerPoint presentations or filling Excel Sheets, this one might do the trick.

If you or your loved ones want to play games, the tablet won't disappoint either. With Snapdragon 8 Gen 1 SoC under the hood, you can rely on the tab to offer a lag-free experience. Software support for up to five years also means that you will continue to get new features via OTA updates.

That being said, the tablet is too large and might not fit the bill for everyone. The Samsung Galaxy Tab S8 Plus offers almost the same set of specs in a slightly smaller body, which also means you get a smaller battery. The Tab S8 Ultra will have a niche user base. For instance, companies and sales employees might find the tablet’s large screen estate useful to showcase their product brochures or portfolio to in-store customers. Sketch artists and doodlers will also love the 14.6-inch display and the S Pen’s responsiveness. On top of this, the tablet, despite being huge in size, is quite thin and light to hold.