Should You Be Avoiding Too Much Blue Light From Your Screens?

Let’s face it. We’re scrolling on social media, we’re checking work emails late at night and at the same time, we’re watching Netflix on our TV screens. It’s not exaggerating to say that most of us spend a large percentage of our time staring at screens of some kind – so that means we’re staring at blue light for hours on end.

But exactly what is blue light and why are people saying it’s bad for you?

Well, blue light is only one of several colours in the visible light spectrum. The others are: red, orange, yellow, green, blue, indigo and violet.

When all of these colours are mixed together, you get the white light we see when we look at the sun. Each colour in the visible light spectrum has a different wavelength and energy level. Blue light has shorter wavelengths and higher energy than the other colours and it’s close to the UV light in the spectrum. Most of the light from the LEDs used in smartphones, TVs and tablets has wavelengths between 400 and 490 nanometres.

Blue light and your eyes

Some recent studies have shown a link between eye damage and short-wave blue light with wavelengths between 415 and 455 nanometres. So blue light can be bad for your eyes and has been linked to problems like blurry vision, eyestrain, dry eye, macular degeneration and cataracts. It can also cause sleep issues for many people. Here’s what you need to know.

Some experts have said they think digital eyestrain, or computer vision syndrome, affects about 50% of computer users. Symptoms include dry, irritated eyes and blurred vision.

Blue light can also damage the retinas of your eyes. and this is called phototoxicity. The amount of damage depends on the wavelength and exposure time. Animal studies show even short exposure (a few minutes to several hours) may be harmful. A filter that cuts 94% of blue light has been shown to lessen damage.

Lots of time spent staring at a screen – especially at night – has been linked to poor sleep quality. The blue light from electronic devices interferes with your circadian rhythm. So when you look at a screen at night, the blue light tells your body it’s day time and stimulates you to be more awake. It sends signals to your brain to wake up when in fact, you should be doing the opposite and relaxing. 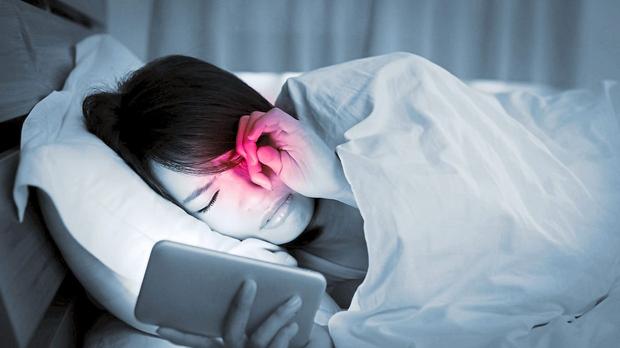 In one study, as little as two hours exposure to blue light at night slowed or stopped the release of the sleep hormone melatonin. Without this hormone, your sleep won’t be as deep or as restorative. This is why it’s recommended you don’t use any digital devices at least 90 minutes to three hours before you go to bed.

The link between blue light and cancer

Blue light exposure has been linked with certain cancers. One study found people who work night shifts are at greater risk for breast, prostate and colorectal cancers – largely because they’re working with blue light instead of natural light around them. As well, blue light has been linked to depressive symptoms in some animal studies. But exposure to blue light during the day may have the opposite effect. It’s even been used to treat seasonal affective disorder, or SAD. Research shows 20 minutes of blue light exposure in the morning helps ease SAD symptoms.

If you suffer headaches or migraines after long hours staring at a computer, it makes sense to wonder if blue light is to blame. While it’s quite possibly the blue light, it’s wise to take regular breaks from your screen. As well, it’s a good idea to have a comprehensive eye examination with an optometrist and look at your focusing system to see whether you need prescription lenses etc.

Where can you buy blue light glasses?

Blue light blocking glasses sound like a good idea with the amount of time we spend staring at a screen. You can buy blue blocking lenses from optometrists as most now offer some kind of blue light blocking filter for their frames. There’s currently no specific Australian standard for blue light filtering glasses or screen protectors, according to the Royal Australian and New Zealand College of Ophthalmologists (RANZCO), but at this stage, any filter would seem to be better than nothing.

Other ways to reduce eye strain

Ophthalmologists often tell us it’s not just the blue light we have to deal with. They say we’d struggle to lift weights at the gym for hours at a time but we expect our eye muscles to function perfectly under extreme workloads without a break for long periods. Our eye muscles become sore, tired and fatigued with ‘overuse’ so it’s a good habit to adopt the 20/20 rule, where every 20 minutes you look up and into the distance for 20 seconds, to give your eye muscles a break.

As well, keep your eyes hydrated and use lubricating drops if you’re on your computer for long periods of time. You can also turn down the brightness of your screen and install a screen filter such as F.Lux which is free. With this filter you can adjust the brightness of the screen and when you turn it off – you won’t believe you used to look at such a bright screen!

If you’re looking for blue light blocking glasses, Blueblox has a full range so you can visit here.