Sixers need to give Paul Reed and Charles Bassey an opportunity

It was entirely predictable that the Sixers’ signing of DeAndre Jordan wouldn’t help their backup center situation. It was a better idea in theory, when you thought of the prototypical center that could complement James Harden in non-Joel Embiid minutes — a high-flying rebounder, rim roller, and shot blocker. Someone with the skills that made Jordan so impactful in his prime.

But that isn’t who Jordan is anymore. He’s declined a lot over the last few seasons, to the point where his motor, speed, agility and defense have dropped off so much that he can’t consistently fill the rim-running, shot-blocker role even in short stints off the bench.

As you’d expect, Jordan has immediately taken sole possession of the Sixers’ backup center spot. With his history with Doc Rivers and experience at 33 years old, he’s a well-known veteran and other bigs on the roster (Paul Millsap, who was understandably replaced, Paul Reed and Charles Bassey) haven’t had a shot to try to crack the rotation again. And through his first five games, the DeAndre Jordan experience hasn’t gone well.

In his 12.8 minutes a night, Jordan has averaged 3.8 points, 5.4 rebounds (2.2 offensive) and 0.6 blocks. His basic numbers don’t really matter, though. The problem is that he still has the same weaknesses that have increasingly bothered him over the last few years — such as reduced mobility when defending near the perimeter, and reduced energy, explosion, and attentiveness as a rim protector. Jordan can’t be relied on to man the back of a defense in nearly the same way anymore, and too often he can be beat by opponents getting downhill or attacking off a ball screen due to how much slower he is sliding his feet now.

Then there are useless lapses in focus and activity like the play below, where Jordan completely lost track of none other than Nikola Jokic at the arc, allowed a free cutting lane, and only started to move once Jokic already had the ball in the paint:

While the Sixers only need their backup center to survive without getting burned for around 8-10 minutes in a playoff game, you can expect teams will look to target Jordan through switches and high pick-and-rolls.

Jordan has typically been a highly efficient finisher at the rim and will likely get back on track soon, but he’s been struggling in this area so far as well. He’s only made 46.2 percent of his (easy) shots within three feet of the basket since coming to Philly.

After the Sixers’ loss to the Nuggets on Monday, Doc Rivers was overly positive with his review of Jordan’s performance so far, clearly reinforcing his confidence in the team’s new veteran center.

“He’s been great overall,” Rivers said. “I thought today he struggled a little bit but still, he’s the one roller on our team. He gets downhill. He sprints the floor, and that’s so important for our team. So he’s been really good. He’s really bought in to what we’re trying to do.”

In Jordan’s defense, he has had some solid moments. He’s still 6-foot-11 with enough leaping ability to catch a few lobs next to Harden (even if Jordan can’t fly down the lane like he used to), he still has a massive 7-foot-6 wingspan, he can grab a few offensive rebounds, and he’s made a few decent rotations around the rim and picked up three blocks. At the very least, he’s better than the smaller, older, less bouncy Paul Millsap.

But that’s such a low bar to clear, and while Jordan’s finishing will inevitably bounce back to his usual level to correct some of his early offensive shortcomings (he made 73.5 percent of his shots within three feet over the previous five seasons), Rivers shouldn’t just be settling on his rotation because of Jordan’s age and familiarity and not let others even get on the court. 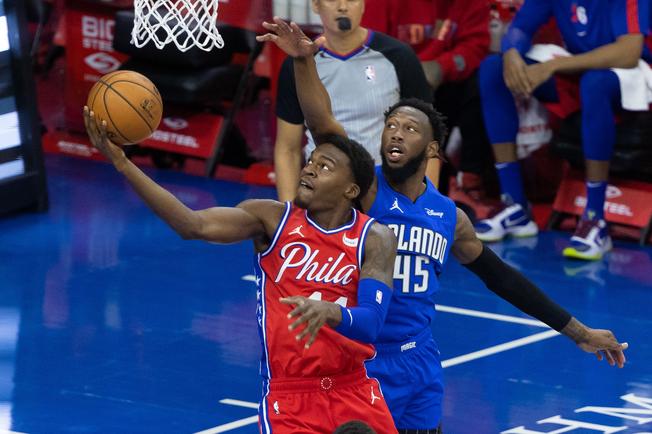 Understandably, Paul Reed has had his ups and downs with the Sixers so far. He can be somewhat out of control, trying to do too much offensively and committing unwise fouls at times, then at others he’ll look like a disruptive defender and athletic finisher. However, he has an edge over Jordan in terms of his high motor, speed, and impressive mobility when moving outside at 6-foot-9. When Reed averaged 14.7 minutes a night in the last three games before the All-Star break, he provided some of his best NBA play yet with highly active defense (he snatched seven total steals in this stretch) and controlled offensive play in a smaller role as a rebounder and play finisher.

There’s some upside to at least giving Reed a shot with his athleticism to cut off Harden’s playmaking, and the agility he offers on defense to potentially embrace a more switchy approach, or at least move around the perimeter better than Jordan.

Then there’s Charles Bassey, who is probably the Sixers’ best option to get some run at center.

Bassey has only appeared in 23 games and played 168 minutes this season. He’s still made some mistakes with his positioning and typical rookie errors, yet his early flashes have been fairly encouraging, showing some of the rim-rolling and defensive qualities that stood out while he was in college.

He has good size with his 6-foot-11 frame and 7-foot-3 wingspan, solid instincts and timing as a shot blocker, and fine lateral quickness for his size. He was a strong rebounder in college and he plays with energy. Even if he’s going to make some mistakes and a couple of bad fouls as he grows used to the NBA, you can at least count on Bassey for his physical tools and effort.

Bassey has looked promising when he’s had chances to play, especially when he picked up a handful of games with 10-20 minutes played in November and December.

Bassey’s sturdy frame helps him when guarding the post, too. He held up about as well as you could ask for against Nikola Jokic back on Nov. 18, when the rookie tallied 12 points, seven rebounds (four offensive), one steal and three blocks, while defending with physicality and reasonable discipline:

He’s also athletic enough to catch a few lobs and likely benefit with easy dump-off finishes playing next to Harden, who has always gotten more out of rim-rolling backup bigs.

So, are Reed and Bassey ready to be constant positive role players, or be completely reliable in the playoffs? Of course not. Players in their first and second seasons need time, and maybe they won’t end up growing into backup bigs of the future for Philly. If they play and it doesn’t work out this regular season? Fine. It’s not like they’ll be way worse than Jordan to cause much damage in a few minutes anyway.

The young guys just need a chance. The Sixers will never know exactly what they have in Reed and Bassey unless they give them opportunities to play, a chance to show whether they can be better options than Jordan or to at least develop into players who could be. The end of the regular season should be a time to finish experimenting and see if there’s an upgrade from Jordan already on the roster.

After all, if the Sixers are going to commit so many roster spots to backup bigs rather than bolstering their wing depth (which is a whole conversation for another time), they might as well try them out.

As I mentioned above, Bassey in particular deserves a chance. When active this season, he’s had stints that have been superior to what Jordan is doing right now. And compared to Reed, Bassey has an advantage in size and strength that help him as a rim protector and full-time center, and he’s been a little more steady in general.

Ultimately, it’s this simple: with Jordan’s level of play at this stage of his career, the Sixers really have nothing to lose.

Razer launches new set of Streaming Products to make your livestreams even more attractive to viewers!