how to remove liquid screen protector

You may have seen people with briefcases in your favourite malls promising a new type of screen protector for your phone. The so called Liquid protector is promised as an alternative to the normal screen protector.

Smartphones ship with touch screens and the biggest risk is the glass shattering after a fall or a knock. This is why people buy cases and screen protectors to protect their investment. A screen replacement can be as much as half the cost of a smartphone and that can be a pain when you send your phone for repair.

The main goal of a screen protector is to protect the main glass from shattering. The secondary goal is to protect the display from scratches. Most modern smartphones have pretty good scratch resistance but glass is glass and glass breaks.

This is what the liquid protector guys have been focusing on. The whole demonstration is to convince you that the “liquid” layer they apply on your phone protects the phone from shattering the display. They even go an extra step of “drilling” the phone with a power drill to sell the product. Traditional screen protectors have an obvious layer on top and since liquid screen protectors don’t have that, they seem very attractive to people.

However, the lofty “promises” from liquid screen protectors have left a lot of people with damaged phones. The promises of protecting your precious screen from cracking are not true and we have seen people share their experiences on social media.

I know this is a late reply and I wish I had seen this tweet earlier but please to anyone else thinking of getting this Nano gel, it’s the biggest scam in screen protector history. 1. There’s no way to remove it 2. If it breaks, guess what? https://t.co/JqVQKZ3Fsf pic.twitter.com/DVwCvhiUAg

That liquid screen protector scam, this is how my friend's phones cracked after dropping from a stool-height… 😂😂😂😂😂 pic.twitter.com/tuzSyRWPWe

Those stupid liquid protectors😡. What they don't tell you ni once it hits the floor, that impact will affect your screen too. 😭 pic.twitter.com/iU5DNK7Jvj

These are some of the many unreported incidences of displays cracking in a spectacular fashion after falling. This goes against the claims by the liquid protector guys that the screen offers crack protection. 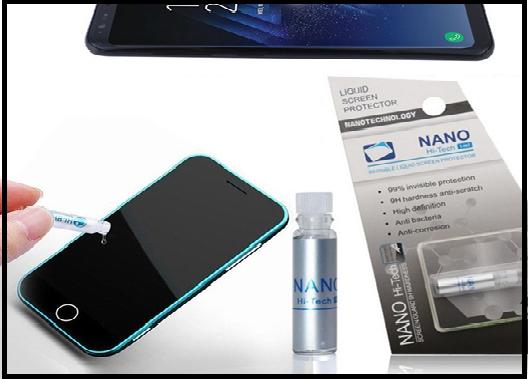 “Liquid is only made for scratches,” Dominic Mumo from X-One East Africa said. “Actually, the nano they are using is our end scratch layer and that is why people have had their gadgets broken due to the liquid. And that’s why the liquid (screen protector) has extorted so many people.” he said.

X-One East Africa are the licenced distributor of the X-One series of screen protectors and phone cases.

One of the major disadvantages of liquid screen protectors is that when it is applied, it cannot be removed. Since it doesn’t offer screen crack resistance, it will shatter. This would mean that your original screen will shatter and you will have to go and repair your screen.

Original screens are usually treated to have some degree of scratch and shatter resistance that is usually better than the liquid screen protectors. Once you break the original screen, it becomes difficult to get an original screen. “That’s a strong point to encourage the consumer to make a replica replacement,” Dominic said.

“Once you break the original, you’ll never get the original,” he said. “Because these are business people, they may hire a cheaper company to make a replica replacement.”

Kenyans usually buy the cheap 200 bob screen protectors that give abysmal scratch resistance and shatter resistance to their phones.

Liquid screen protectors were initially not cheap. Someone confessed to me that they initially charged KES 1,500 to apply the coating on the display and the back. That is not cheap and their target market was malls where they were able to target people that have money.

The dealers changed tact and went for the masses at the grassroots. Right now, the prices have plummeted. You can apparently get a liquid screen protector for as low as KES 100 in some regions in Nairobi, which is way cheaper than the screen protectors you can buy around.

Display repairs are expensive. In some cases, it can be half the cost of the entire phone. This is why people see the need to protect their phones with cases or with a screen protector.

He admits that X One is in the premium side of the market. X-One sells what they call the “World’s Toughest Screen Protectors” for different type of phones that are north of KES 2,499 each.

“I wanted to inform the consumer that glass is designed to crack because the business model of the glass is in the cracking,” he said. Glass screen protectors are glass and glass breaks.

Dominic maintained that X-One products are not made from glass. If you check out their website, their screen protector is made from a PET material known as “Nano Silicon” which is definitely not glass.

“Ours is not glass,” he said. “Many people are wasting money on glass which is to fund a business model that doesn’t work for the consumer and they are made to break and pay.”

“The person buying the KES 500 one is eventually going to spend much much more after a short while. And if the impact is big enough both the glass protector and the glass will break,” he added.

Environmental sustainability and the UK competition and consumer regimes: CMA advice to the Government