A series with 15 straight Emmy nominations for outstanding reality competition — and one win, in 2010 — may not want to tamper with a foolproof recipe, but the COVID-19 pandemic forced Top Chef to tinker with its format.

In addition to the general protocols taken by every production — bubbling, social distancing, daily testing — the show took advantage of the COVID-necessitated spirit of change to introduce some more experimentation. In lieu of having a celebrity chef on the judging panel, season 18 welcomed a dozen of the series’ most beloved alumni, who provided the contestants — and the Bravo show’s loyal viewers — with a dash of comforting familiarity amid an uncertain time. Overall, Top Chef: Portland served as a love letter to the battered restaurant industry and other occupations impacted by the pandemic as well as a refreshing response to the nationwide reckoning over racism and cultural bias, with the series’ most diverse cast of chef-testants ever and emotional challenges revolving around Indigenous ingredients, West African cuisine and feeding frontline health-care workers.

And as if figuring out how to make the show amid a global pandemic, social unrest (and local wildfires) wasn’t enough, between the end of production and the season’s premiere, winner Gabe Erales was fired from his post as executive chef of Austin restaurant Comedor in December “due to violation of policies and for behavior in conflict with [the company’s] values,” according to chef-partner Philip Speer — who clarified following the July 1 finale that Erales’ behavior was related to harassment of women.

Casey Kriley and Jo Sharon, co-CEOs of Top Chef production company Magical Elves, the only double nominees in the category (Netflix’s try-it-yourself baking competition Nailed It! is their other show) recently spoke to THR about evolving and expanding both franchises and lessons learned from shooting season 18.

You began preparing in spring 2020, right around the time the U.S. began shutting down because of the pandemic. What was the biggest challenge in terms of COVID-19 accommodations?

CASEY KRILEY What was really interesting, in terms of producing the show in the middle of a global pandemic, was how do you approach limitations creatively and use those to take the format in new directions? We didn’t want the show to feel like it was produced during COVID. How do you creatively attack that to make it feel like a continued evolution of the series?

People loved some of the adjustments this season, like the rotating panel of alumni judges, which solidified the idea of the franchise as a family. Will you be keeping some of these changes?

JO SHARON We had been talking for a long time about how to infuse our alums more into the process, and this opportunity opened it wide up for us. They had an amazing time, it was so well received, so that’s definitely something we’re continuing to talk about. Maybe it won’t look exactly the same as last season, but what those changes taught us is we can make changes and the audience will be receptive. Eighteen seasons in, most shows don’t make big changes like that. We did because we had to, but they worked, and that’s given us the freedom to think about other places we can evolve the creative.

KRILEY At the beginning of the Black Lives Matter movement last year, we talked a lot about diversity both in front of and behind the camera at our company. We wanted to commit to diversity on a much higher level, and that was part of the discussion in terms of bringing back alums as well.

How do you think shooting during a pandemic affected the contestants? Unlike other seasons, to maintain the integrity of the production bubbles, there wasn’t a production break before the finale, and the finalists all seemed wiped.

SHARON Both for people behind and in front of the camera, this season was more difficult but also more rewarding than any other. We felt such an incredible sense of accomplishment at the end. For a lot of those chefs, their industry was one of the hardest hit by the pandemic, and I think that being on the show gave them a sense of purpose and something to look forward to. We were nervous — “Are we bringing in a bunch of fragile people in a really tough situation?” — but what we found was [being on the show] actually bonded them and helped them through a really hard time.

I need to ask about Gabe. What were the conversations after he was fired from his job? 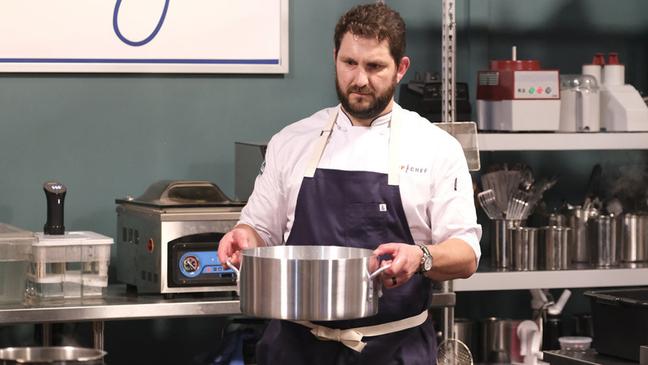 KRILEY We were all really disappointed to hear about the termination, which came to light after we had already wrapped filming the season. For us, there were so many talented chefs this season who gave their heart and soul to the competition as well as all of the people behind the scenes and the alums. And while we don’t condone [Erales’] behavior, we felt that everyone who participated deserved to see the show air.

SHARON Based on the information we had, we wanted to move forward with the show and give all the chefs who competed the opportunity to have what they did [on the series] air in the way that the competition unfolded.

Will this experience have any impact on casting and vetting in future seasons? 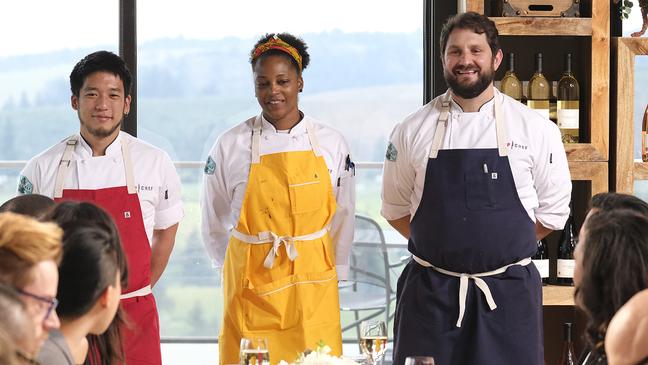 SHARON Yes, we have definitely looked at our process and are adjusting and updating some things. But I will say that it has always been a very thorough vetting process. It’s a very small community in terms of the chefs and the people whom we reach out to. We have been making any adjustments we can, but it is a very, very thorough process.

Speaking of casting, how intentional was it that season 18 featured the most diverse roster of chefs yet?

KRILEY Our casting team is always looking to find the best chefs out there. That’s our starting point. That’s what Top Chef is known for. We always want Top Chef to reflect the audience and the diversity of our chefs in kitchens across the country. We were in a very devastating time with the pandemic, but the silver lining — in terms of casting — was many chefs that we’ve looked at for many seasons were available to participate based on what was happening with their restaurants or their businesses. What we were surprised by in terms of the cast we ended up with was how much the food changed [because of their] various cultural backgrounds, experiences and cuisines. If you look back in the history of Top Chef at some of the earlier seasons, you would see the same ingredients, the same type of dishes. It was really fun for our judges and alums to experience [a variety of cuisines this season].

This season’s challenges seemed to be conceived with a spirit of culinary inclusion. How did those ideas come about?

KRILEY With every new season, the last “castmember” is the city. We really want to represent the city on every level in terms of the food scene, the history, the culture, the hidden gems you wouldn’t necessarily know. Every season is its own unique experience. I also think that as we’ve really pushed for more diversity and inclusion behind the camera, another wonderful thing that we’ve started to see is other people’s creative point of view. Again, that’s our commitment to really being in action about diversity and inclusion versus talking about it. Our first elimination challenge this season [which was judged through blind tastings] was born out of a conversation about diversity and inclusion with an exec at another network. She was sharing with us how a lot of orchestras have started auditioning people without seeing them and just basing it on their performance.

What’s precipitating these new spinoffs — Amateurs, Family Style — that are happening this late in the lifespan of the show? Is that an advent of COVID production demands, feeding Peacock or something else?

SHARON All of the above. There are so many more buyers and so much more content being put out, and one of the biggest things we’re seeing as sellers is that preexisting IP is one of those big pillars everyone is looking at. We’re very lucky and honored to have a legacy show in our stable. Those shows are across the board for all companies getting a lot of spinoffs and a lot of love from a lot of platforms.

How do you balance the expansion of the Top Chef brand without losing what makes it special?

KRILEY The Top Chef family really is a family. Our showrunner started on the first season as a PA, and we have people who have been there for the whole run. Similar to how we had to challenge ourselves to produce the show in the middle of the pandemic, we challenge ourselves with every spinoff to say: What is the point of doing this? How is it different tonally in terms of storytelling, look, edit style, but how does it stay connected to the mother ship?

What about growing the Nailed It! franchise? You already have spin­offs in other territories.

SHARON That’s probably a question better suited for Netflix. Not that we are aware of right now, but we are actively and always talking to them about ways to expand the brand into other areas. Nailed It! is not just a show about baking. The spirit of Nailed It! is what has infiltrated pop culture. People love to watch other people attempt to do things, not take themselves too seriously and not be afraid to fail. We’re thinking, where else can we take that spirit and grow the brand in other areas?

Whereas Top Chef is aspirational, Nailed It! is more attainable.

SHARON It’s competition for the rest of us.

Last question: After a couple of contestants this season — including Shota Nakajima in the finale — struggled with their rice, any thoughts about putting rice cookers in the Top Chef kitchen?

KRILEY There have not been discussions, but now that you’ve raised the point, we will definitely circle back and have conversations with our Top Chef team about it. Maybe we’ll have a challenge specifically around cooking rice!

Interview edited for length and clarity.

This story first appeared in the Aug. 11 issue of The Hollywood Reporter magazine. Click here to subscribe.