can i return a screen protector to walmart

The scene, posted on Twitter by PlayStation, sees Paul Rudd's Mr. Grooberson encountering a lone Terror Dog in a Walmart aisle, as it helps itself to some large bags of pet food. Grooberson attempts to back away, but his efforts are thwarted when a Roomba driven by mini-Stay Puft Marshmallow Men crash into his leg, alerting the hellhound to his presence. This results in a chase sequence where Grooberson tries to get back to his car while the Terror Dog destroys clothing displays and the Walmart's sliding doors in pursuit of him. The clip ends on a comedic note, with the Dog stopping the car in quite an unexpected manner.

CBR VIDEO OF THE DAY

RELATED: Ghostbusters: Afterlife Director Explains Why Harold Ramis Is the Heart of the Film

Who’s afraid of the big bad…Terror Dog? 👿See the return of the demonic hellhound in an exclusive #Ghostbusters: Afterlife clip and learn about its creation from director Jason Reitman: https://t.co/kGi7VUT10O pic.twitter.com/ypXVdJzVL4

The original Ghostbusters introduced its Terror Dog as the paranormal forms of Zuul and Vinz Clortho, Gozer's respective Gatekeeper and Keymaster. The two creatures ended up possessing New York residents Danna Barrett and Louis Tully due to their residency in 550 Central Park West, which, as the Ghostbusters learn, was created to house a Gozer-worshipping secret society. Their human hosts were briefly turned back into Terror Dogs as part of the ritual for bringing Gozer to Earth but, after the Ghostbusters destroyed its Temple door and defeated Gozer's Stay Puft form, Danna and Louis were returned to normal. 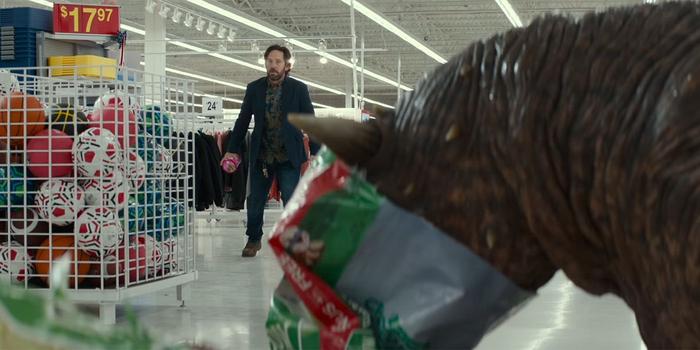 Though it's unclear whether Gozer will return in Ghostbusters: Afterlife, the film's latest IMAX poster has teased its new characters firing their Proton Streams against a seemingly larger-than-life threat. Afterlife focuses on the late Ghostbuster Egon Spengler's daughter Callie, who takes her kids to the town of Summerville, Oklahoma, where they discover "the secret legacy their grandfather left behind" and a variety of old and new Ghostbusters gear.

Ben Wasserman is a graduate of NYU's M.A. Cinema Studies Program at the Tisch School of the Arts. He's previously written for the pop culture websites ComicsVerse and mxdwn Movies and currently writes movie reviews for Film-Forward alongside CBR. Ben loves all things film, television, gaming and comic-related, especially when it comes to Marvel.You can reach out to Ben on his Twitter page: https://twitter.com/WassermanReview