You need to try these new Apple Watch 7 features

After setting up your new Apple Watch Series 7 that you got this holiday season and pairing it with your iPhone, it's time to check out all the new features and tweak a few settings to make the most of your new Watch. The Apple Watch Series 7 comes with a larger screen, faster charging and a more durable design. That might not sound as exciting as the blood oxygen sensor that debuted in last year's Series 6. (Here's how the Apple Watch 7 compares to the Apple Watch 6.) But the Series 7's new features have the potential to add more convenience to a lot of everyday tasks, from checking the time to responding to texts and tracking your sleep.

Apple unveiled the $399 Apple Watch Series 7 during its product launch event on Sept. 14 alongside the iPhone 13 family, a refreshed iPad Mini, and a new entry-level iPad. The new Apple Watch is a light update to the Series 6 that's ideal for people looking to replace a watch that's several years old.

The Apple Watch has a new QWERTY keyboard that takes advantage of its larger screen, which is about 20% bigger than the Series 6, allowing you to type similarly to how you would on a phone.

What's new: A full-size keyboard means that you aren't limited to sending a canned response to a text, scribbling a quick note or dictating a message, as is the case with the Apple Watch Series 6.

How you'll use it: The Apple Watch Series 7's QWERTY keyboard lets you tap each key to type, or use Apple's QuickPath feature to swipe between letters without lifting your finger. You'll still want to use your phone for messages longer than a short sentence, but it still generally makes it easier to text using the watch.

The bottom line: The Series 7's QWERTY keyboard makes it easier to send longer and more complex messages that are uncomfortable to scribble or too private to dictate. It's another example of how the Apple Watch has evolved to become better at working independently of your phone in the years since its launch.

Third-party Apple Watch apps like FlickType already allow you to type on your Apple Watch, but having it as a native option on the watch results in a smoother experience. It also means watch owners won't have to rely on third parties for this potentially vital tool, which is important considering some keyboard apps have been accused of participating in App Store rating scams.

Read more: Apple Watch 7 upgrade: How to trade in your old watch to get the best deals

Larger screen on the Apple Watch Series 7 amps up reading

The Series 7 is Apple's first major redesign since the Series 4 launched in 2018. The new watch comes in 41-millimeter and 45mm sizes for the first time, representing a shift away from the 40mm and 44mm sizes that were available on the Series 4 through Series 6. 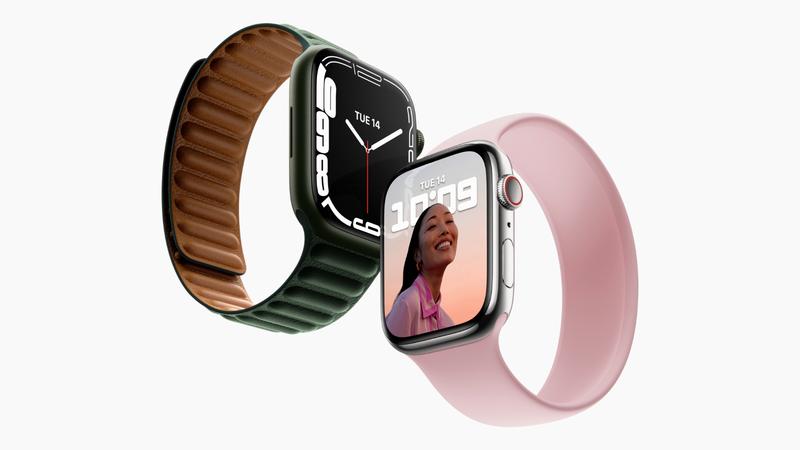 How you'll use it: The Series 7's larger screen makes it better at its most important job: showing information that's easy to see at a glance so that you don't have to grab your phone. The larger screen means the Series 7 is capable of displaying 50% more text without having to scroll, making reading text messages, emails and notifications more convenient.

There's more: Apple also updated the user interface in its apps to make better use of that larger screen. Apps like the stopwatch, activity and timer now have larger buttons, meaning it's easier to hit snooze even when you're still half asleep. You also get specific watch faces that are optimized for the Series 7's bigger display, such as a new version of the Modular face that can fit complications with more information. I've been using this new watch face to see my activity progress, the time and weather forecast at a glance.

And don't forget, WatchOS 8 introduces the ability to set Portrait mode photos as your watch face, and the Series 7's larger screen is better able to show them off.

A brighter screen in always-on mode

Apple also updated the Apple Watch's display in a different way by making the screen more visible in always-on mode. It's another addition that makes it even faster to get quick bits of information from your watch.

What's new: The Apple Watch Series 7's screen is up to 70% brighter in always-on mode when your wrist is down, according to Apple. However, Apple specifically says this applies to indoor usage.

How you'll use it: The Series 7's improved brightness means it is even easier to see information like the time, your activity rings and your next meeting without having to wake the watch's screen. It feels like a step toward making the Apple Watch's screen appear the same whether it's asleep or in use, and doing so creates a more seamless look that doesn't feel jarring when switching between awake and idle mode.

To use this feature, you'll want to make sure the always-on display setting is turned on in the Apple Watch's settings menu. On your Apple Watch's app screen, press the settings icon, scroll down to Display & Brightness and tap Always On. From there, make sure the switch next to Always On is toggled on.

What about battery life? You could also choose to keep this feature turned off if you want to maximize battery life, and Apple hasn't said whether the brighter always-on screen will affect the watch's power consumption. I've been wearing the Apple Watch Series 7 daily with the always-on display setting turned on, and it typically lasts for about a day and a half. But battery life will always vary depending on your usage, and activities like using GPS connectivity while running will cause it to drain faster.

The Apple Watch Series 7's battery lasts as long as the Series 6, but the amount of time it takes to charge your watch has dipped.

What's new: The Apple Watch Series 7 can charge up to 33% faster than the Apple Watch Series 6, according to Apple. It takes 45 minutes to charge from zero to 80%, and 8 minutes of charging should enable 8 hours of sleep tracking. In CNET's testing of the new Apple Watch, reviewers found this to be true. Charging the Watch for at least 30 minutes made the battery jump from zero to 54%. In comparison, the Series 6 only replenished 37% in the same amount of time.

How you'll use it: We've been asking for more battery life out of the Apple Watch for years, but that's especially relevant now that Apple has added native sleep tracking to its smartwatches. Rather than extending the watch's battery life, Apple makes it easier to quickly charge the watch during short windows throughout the day, presumably so that you don't have to charge it overnight. The idea is that you'll be able to top off the watch's battery whenever you have a few spare minutes.

The bottom line: The Apple Watch Series 7's faster charging speed is another way in which Apple is trying to make its smartwatch a more capable sleep tracker. In addition to making the Series 7 easier to charge in a pinch, Apple also added the ability to measure respiratory rate during sleep with its WatchOS 8 update. Taken together, these improvements could help Apple catch up to Fitbit, which offers multiday battery life on its watches and more in-depth sleep metrics.

The Apple Watch Series 7 has a brawnier build

Exercise tracking has become one of Apple's biggest areas of focus for the Apple Watch. The Series 7 is more suitable for outdoor activity since Apple claims it has a more durable build.

How you'll use it: The Series 7's increased durability pairs nicely with the new cycling features in WatchOS 8. The new software brings an updated version of fall detection that Apple says can tell the difference between falling off a bicycle and a different type of accident. Apple also says WatchOS 8 can automatically detect outdoor cycling workouts. (See Lexy Savvides' test of the new Apple Watch cycling features here.)

The bottom line: We put Apple Watch Series 7's durability to the test. Those who want a truly rugged watch have military-grade options from Garmin and Casio to choose from. But these updates suggest Apple is trying to push the Apple Watch beyond basic workouts and appeal to those who might need a more durable watch for activities like rock climbing. That's the premise behind the rumored Explorer Edition, which Bloomberg reports will come with greater impact resistance and could launch in 2022.

Now playing:Watch this: Apple Watch Series 7: How does it stand up to water and...10:39

Is the Tesla Powerwall Worth the Hype?