how do pop it phone cases work

Because the free market works poorly for many filmmakers, a system of state subsidies often seems better at producing a wide range of ambitious but noncommercial films. Yet, as international filmmakers often discover, government involvement puts filmmaking at the mercy of politics. The crisis of governmental pressure on nominally free artists is at the center of the Israeli filmmaker Nadav Lapid’s “Ahed’s Knee,” a quasi-autofiction about a filmmaker who is faced with the prospect of sacrificing his artistic freedom and his personal dignity for the sake of state financing. For that filmmaker, called only Y (played by Avshalom Pollak), the pressure that he faces exemplifies a gross fracture at the core of Israeli society: the concealment of its radical militarism and exclusionary nationalism under the guise of cultural civility and technological modernity. The latest bit of pressure that Y faces is the last straw; it pushes him into a definitive and irreparable crisis, and the cinematic results of his crackup are hectic, furious, and reckless.

“Ahed’s Knee” (which was in last year’s New York Film Festival and opens Friday at Lincoln Center and in other cities April 1st) is a work of personal political cinema that’s also among the most physically intense and demanding films of any sort that I’ve seen. It doesn’t so much depict its subject as embody it; Y’s crackup virtually shatters the screen, and Lapid’s approach to cinematography, performance, and narrative itself has an eruptive fury to match. The film’s outbursts feel like the eruption of Lapid’s own mind; there is littlesemblance of distance between him and the fictional protagonist. For all the specific accusations and denunciations that Y—and Lapid—level at Israeli politics and culture, “Ahed’s Knee” is, above all, a work of cinematopoeia: it looks and sounds and feels like what it means. 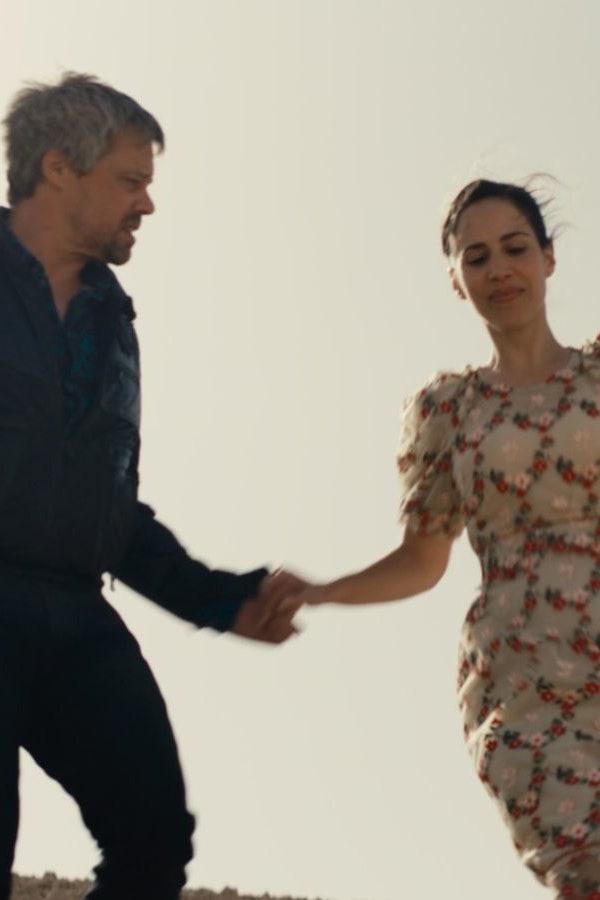 Y, a fortysomething filmmaker from Tel Aviv, travels—in a small plane that’s filled with soldiers en route to a mission in Gaza—to the small and remote desert town of Sapir, where he has been invited to introduce one of his films at the local library. There, he’s greeted by an enthusiastic and friendly twentysomething official from the Ministry of Culture, Yahalom (Nur Fibak), a native of the town. Her cheerful provincial sociability contrasts radiantly with Y’s urbanely dour skepticism. Their conversation is frank and intimate, and they have an easy physical camaraderie; Yahalom speaks freely about her modest start as a local librarian and her happenstance promotion to the national bureaucracy—after another culture official was fired as a result of political controversy over a work of art. The film’s drama is sparked by the political aspect of Yahalom’s job: she can’t pay Y for his library visit unless he signs a form committing to a topic of discussion, and the choices he’s offered are either insipid or nationalistic. She’s not happy with her role; she disdains the censorship that she’s abetting but abets it nonetheless.

That piece of paper sets Y off: it turns him into a guerrilla journalist with a plan to report on the policy and Yahalom’s part in it. In the process, he turns his candid relationship with Yahalom into one of surveillance and betrayal. The piece of paper also slices through the tight surface of Y’s personality, with which he manages to repress his anger at Israeli society. It provokes him to unleash a vitriolic torrent of horrific recollections of his military service, several decades ago: these are seen in high-pressure flashbacks that appear to be unreliable ones, twisting the story to change Y’s role. In a fire-spewing rant, he charges Israel with cultural, moral, and political degradation, with racism and nationalistic aggression, with indoctrination and oppression—a tirade that seems to consume him, Yahalom, the landscape, the evening, and his future life in Israel. Yet Y isn’t done: there’s still some fire left in the dragon’s belly, and he lets it loose onstage after the screening, where he incites a public scandal—one that, thanks to social media, instantly becomes a national one. It leads to a violent, three-way showdown, like a Twitter-ized version of the triple gunfight in “The Good, the Bad and the Ugly.”

The extended, frenzied scenes of crisis and confrontation are filmed with a thrusting and distorted blend of pugnacious performance and disorienting camera work. Even encounters of a far calmer nature are rendered with similarly expressive extremes. When Y goes sightseeing alone in the desert, with bouncy pop on his headphones, he gyrates and shuffles and plays to the camera as if it were the mirror of his mind; meanwhile, the frame jerks up to the sky, down to the sand, around to the hills, lurching to suggest an inner turmoil that surpasses Y’s outer swagger. When Y chats with his driver, the camera pivots and darts between them, and Y drums on the window with nervous intensity. He does quasi-martial exercises, filmed in urgent and fragmented intimacy, while reading a text message from his mother. A walk in the desert finds Y bouncing with barely repressed frenzy and crashing against the edges of Lapid’s frame. The darting and lurching camerawork signifies a mind—and, for that matter, a country—in self-tormenting emotional overdrive, riven by its contradictions.

The movie’s title alludes to a real-life event, from 2017,when a Palestinian teen-ager, Ahed Tamimi, hit two Israeli soldiers whose unit, a short time earlier, had shot her cousin. She was arrested and given a jail sentence, but an Israeli Jewish legislator tweeted that he wished she’d “gotten a bullet, at least in the kneecap.” Y plans to make some sort of video project about Tamimi, her resistance, her arrest, and her virtual confrontation with the politician. In the movie’s first dramatic scene, Y holds casting sessions for the role of Ahed and, in the process, finds himself uneasily reproducing the violence to which Tamimi was subjected in real life. The disturbing incongruities of Y’s conventionally practical approach to such a subject suggest that he has reached an artistic impasse to match his political crisis. Meanwhile, his mother, who is also his prime artistic collaborator, is dying of cancer even while helping him plan the project and emphasizing the grave danger that he faces in realizing it.

Y’s memories of the Army bring to mind a cult of death, an oceanic trauma in which Jewish life in Israel is submerged. His self-punishing yet also cruelly hectoring rants exhaust and imperil himself, Yahalom, and his public; they are the work of a tormented consciousness with no way out, shattering against the virtual walls of public institutions and societal abstractions that in no way yield to him and heedlessly scattering their lacerating shards. (The self-implicating turbulence of “Ahed’s Knee” reveals many recent political films as weak tea indeed.) Where Y’s mother warns him of trouble, his friend counsels him unambiguously, “The way things are going, beat it to Paris or New York. In your case, Paris.” In “Ahed’s Knee,” Y burns his bridges, both practically and psychologically; he puts himself into a self-exile more extreme, an isolation more unapproachable, than any that his differences with the cultural authorities could provoke. In a state of absolute conflict with his society and himself, in a total break with Israel because of what it does—because of what he can’t do there and what he must—Y’s actions leave him no way out. The break that the film depicts is as personal as the ideas that it expresses: Lapid now lives in Paris.

10 Best Nerdy Valentine Gifts For the Technophile in Your Life