The iPhone 13 is a minor upgrade to last year’s brilliant iPhone 12, with an improved camera, larger storage longer battery life and a small price cut.

The phone has the same general design as its predecessor. Its flat aluminium sides and hardened glass front and back feel just as robust as last year. It is 12g heavier and ever so slightly thicker, but unless you compare them side by side that is not noticeable.

The screen is crisp, vibrant and a little brighter than last year’s model. It has a refresh rate of 60Hz, which was standard for iPhones but makes it less smooth when scrolling than most Android rivals and this year’s iPhone 13 Pro models with their 120Hz displays.

The iPhone 13 has Apple’s latest A15 Bionic processor, which is slightly faster all-round than last year’s A14 in the iPhone 12, and double the starting storage with 128GB, which will probably be enough for most people. It is one of the fastest phones you can buy.

Battery life is excellent. The phone lasts about 46 hours between charges with the screen used for about five hours in that time including 90 minutes browsing on 5G, which is longer than most similarly sized rivals and last year’s model. That means the phone can just about make it from the morning of day one until the morning of day three if you’re careful, but more likely it’ll need charging every other night.

Apple does not provide an expected lifespan for the iPhone 13’s battery but it can be replaced for £69. Batteries in similar devices typically maintain at least 80% of their original capacity after 500 full charge cycles. The smartphone is generally repairable, with an out-of-warranty screen replacement costing £266.44. The previous iPhone 12 was awarded six out of 10 for repairability by the specialist site iFixit.

The iPhone 13 uses 98% recycled rare earth metals, 99% recycled tungsten and 35% recycled plastic in various components, plus 100% recycled tin in the solder of its main board and battery management unit. The company breaks down the phone’s environmental impact in its report. 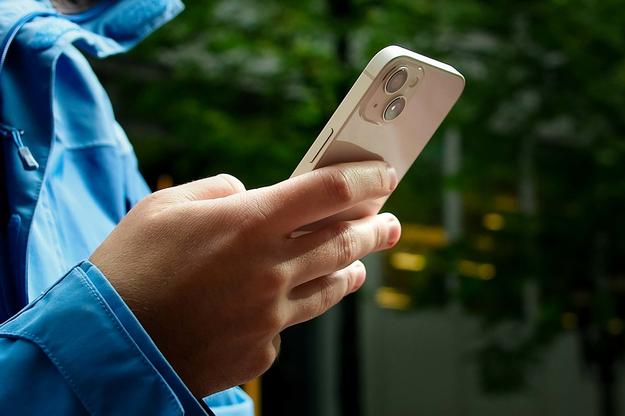 That includes various newly added features such as the faster, local voice interpretation for Siri, improved notifications and “focus modes” for removing distractions, plus an improved Safari browser design and FaceTime video calling with non-Apple users.

Apple provides software updates for its smartphones for longer than any other manufacturer. You an expect at least five years of software and security updates but potentially as long as seven years, so you can use the phone safely for longer.

There are two improved 12-megapixel cameras on the back, one main and one ultrawide angle; there is no optical zoom.

Both cameras are bigger and let in more light than those on last year’s models, which is most noticeable on the main camera. Photos in good light are detailed, crisp and well balanced even in high contrast scenes. Low light performance is greatly improved, so you need the dedicated night mode far less often while producing sharper and better balanced images. The ultrawide is a little sharper and has better low light performance too, making it more usable indoors.

The new “photographic styles” feature for still shots is great, letting you choose the balance between contrast, vibrancy and tone. Previously Apple typically favoured a warmer look compared with rivals from Google and Samsung, which you can now change beyond simply applying filters.

The iPhone is still leagues ahead on video quality. New for this year is “cinematic mode”, which simulates “rack focus” where film-makers draw your attention to a person or object by switching focus to them when they look towards the camera and blurring the foreground and background. It’s a lot of fun to play with, but I can’t see myself shooting a film with it.

The 12MP selfie camera is the same as on previous iPhones and is starting to show its age. It shoots good, crisp and detailed images in bright light, but struggles a little in dimmer settings such as inside a pub often resulting in softer, blurrier images.

The iPhone 13 keeps everything that was great about the iPhone 12, cuts £20 off the price, doubles the starting storage and adds two meaningful upgrades: longer battery life and a better camera.

That makes it one of the best phones you can buy, particularly when you take into account that you can safely use it longer than any other smartphone with in excess of five years of software support provided by Apple, plus reasonable and accessible battery replacement options.

It is not perfect – it lacks a telephoto camera and the screen is slower than rivals. It is not worth the upgrade for anyone with a recent smartphone. But for those looking to replace a three or four-year-old phone, the iPhone 13 should be very near the top of your hitlist.

Cons: no USB-C, need your own charger, no telephoto camera, screen slower than competition and 13 Pro.