Shooting victim is saved... by The Hulk! Bullet bounces off of man's Marvel hero phone case during armed robbery in Brazil

By Chris Jewers For Mailonline

A Brazilian man has survived being shot during an armed robbery after the bullet hit his Incredible Hulk case placed on his mobile phone.

The victim was admitted to the University Hospital in the city of Petrolina in the Brazilian state of Pernambuco on the afternoon of Thursday, October 7.

When the doctors heard the victim had been shot, they began to prepare for the worst. However, upon examining him, they found the bullet did not even penetrate his skin.

Pictured: The Incredible Hulk phone case (left) and the damage phone (right) which potentially saved a man's life when he was shot during an armed robbery in Brazil. The bullet had grazed the victim's hip before being stopped by his phone, which, fittingly, was encased in a cover displaying a likeness of the Marvel Comics fictional bullet-proof character the Hulk

The bullet had grazed the victim's hip before being stopped by his Motorola mobile phone, which fittingly was encased in a cover displaying a likeness of the Marvel Comics fictional bulletproof character the Hulk.

The Hulk is a green-skinned superhero possessing an incredible amount of power and the ability to handle being shot with his impenetrable skin.

The man's phone screen was smashed from where the bullet hit him, but apart from some bruising the man came away unscathed

Though the man was shaken, he only had pain in his hip area, which according to Dr Pedro Carvalho had only received a small bruise. 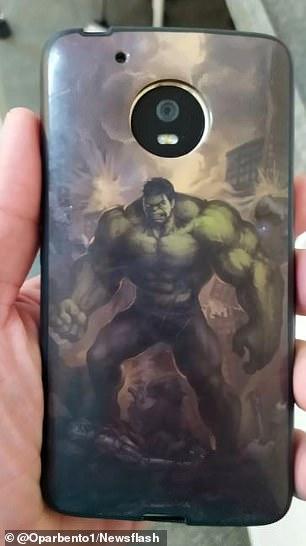 The victims - whose name and age were not reported - was discharged from the hospital and sent home just a few minutes after being examined.

According to the police, the shot was fired during an attempted robbery in a rural area of the municipality of Petrolina, in the northeast of the country.

When police officers arrived on the scene, the suspects had already fled, and the victim was taken to hospital by paramedics.

At the time of reporting, the police had not identified the suspects, and it was not reported if they continue to investigate the case.

Dr Carvalho subsequently posted photos of the damaged mobile phone to Twitter, where they received over 6,000 'likes'.

Brazil sees one of the highest rates of violent crime in the world each year, with a homicide rate of around 30-35 people per 100,000 inhabitants.

It is also the country with the highest number of homicides in the world, with 2018 alone seeing 57,358, although the figure has declined in the last couple of years.

By posting your comment you agree to our house rules.

Your comment will be posted to MailOnline as usual.

Your comment will be posted to MailOnline as usual