Hong Kong's government said any decision to impose a COVID-19 lockdown would take into account the global financial hub's status and ensure basic needs such as food and urged anxious residents who raided supermarkets this week not to panic.

The government said it was still planning and "refining" details for a compulsory mass COVID testing scheme and would announce details once they had been confirmed.

The government statement, released late on Tuesday, comes amid widespread confusion and chaos with many residents fatigued and frustrated by the mixed messaging and almost daily tweaking of coronavirus rules. 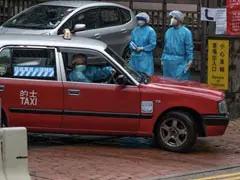 Leader Carrie Lam had previously said that a citywide lockdown and compulsory testing were not being considered.

However Health Secretary Sophia Chan on Monday said that a lockdown had not been ruled out, fueling rumours and sparking a rush for groceries, pharmacy products and banking services.

Hong Kong has stuck firmly to its "dynamic zero" coronavirus policy, like in mainland China, which seeks to curb all outbreaks. Some business leaders, medical experts and diplomats have questioned the sustainability of a zero COVID policy as cases surge.

The government will "safeguard the status of Hong Kong as a financial centre when implementing the Compulsory Universal Testing scheme (CUT)", it said.

"The experience of implementing a CUT initiative in other parts of the world shows that the basic needs of citizens such as food, necessities and the seeking of medical attention outside home should be addressed." Citizens should not "panic nor scramble or stockpile the relevant supplies".

The former British colony has reported more than 230,000 coronavirus infections and more than 800 deaths since the pandemic began in 2020. Around 500 deaths have been in the past week, with the majority being unvaccinated residents.

PromotedListen to the latest songs, only on JioSaavn.com

Daily reported infections have soared more than 30 times to over 30,000 since the start of February when there were around 100 daily cases. There have been more than 800 deaths, with around 500 deaths in the past week.

Health experts from the University of Hong Kong said there were around 1.7 million people already infected as of Monday, with a peak of around 183,000 daily infections expected in the coming week.