how to loosen a tight phone case

For once John Bercow is lost for words! Bully ex-Commons speaker stays tight-lipped on bust up at his home when his wife Sally called the police as he is seen having a coffee in the sunshine

By David Pilditch and Katie Weston For Mailonline

John Bercow has declined to comment after it was revealed police were called to his home following an alleged bust-up with his wife Sally.

The ex-Commons speaker, who is also at the centre of a bullying scandal, refused to discuss the incident after answering the door at his £1million townhouse next to the River Thames in Battersea, south west London.

Asked about the bust up which reportedly took place last August, the former MP repeatedly replied: 'Have a good day.'

Bercow refused to answer further questions before shutting the door. Neighbours were unaware of the incident and it appears the couple have since made up.

One female neighbour said: 'This is the first I've heard of it. They are both still there. I often see them leaving together.'

Another local said: 'We haven't had any trouble with them and the first I heard about it was when I saw it on the news online today.'

The former politician has since been spotted outside a restaurant near his home today, enjoying a coffee in the sunshine.

He was seen wearing a Nike running outfit and trainers while sitting down to take a phone call amid the latest allegations.

Ex-Commons speaker John Bercow has since been spotted outside a restaurant near his hometoday (pictured above), enjoying a coffee in the sunshine

The Metropolitan Police said officers were called to the property at 11.35pm on August 26 last year.

A spokesman said: 'Police were called to an address following reports of a disturbance. Officers attended and an allegation of common assault was reported.

'No arrests were made at the time and the case has since been closed with no further action'.

Meanwhile, Bercow has resigned as the trustee of Holland Park School, where he sends his children, amid the scandal that he had bullied staff.

He told Schools Week: 'I didn't want to be a distraction.

'I'd been on for 15 months and it's been a hugely busy and challenging time for the school. I've made my input as productively as possible.'

His comments came as MPs called for two universities to remove Bercow from honorary roles.

Royal Holloway and Birkbeck are being urged to remove the former Speaker of the House of Commons from his appointments at the institutions after he was banned from holding a parliamentary pass this week. 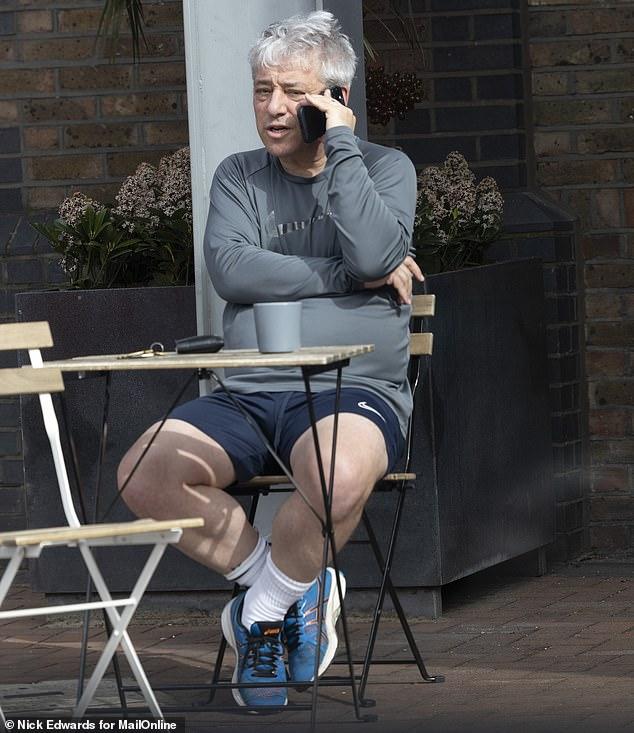 John Bercow has resigned as the the trustee of Kensington's Holland Park School where he sends his children.

He was a director there from November 2020 but left less than two years later on March 11 amid scandal that he had bullied staff.

Bercow told Schools Week: 'I didn't want to be a distraction.

'I'd been on for 15 months and it's been a hugely busy and challenging time for the school. I've made my input as productively as possible.'

'His work with the school has always focused on making sure that the school is moving forward positively and that our students have the best possible education and experience.'

The school became known as the socialist Eton after it was chosen by a series of left-wing politicians, including Tony Benn, as the place to send their kids.

Writing in The Guardian in November 2020, Bercow said: 'My three children attend Holland Park in west London, where I have now just been elected a parent-governor.

'It is a very disciplined school, led by the prodigiously energetic Colin Hall, who arrives at the crack of dawn and is remarkably knowledgable about every child.'

Tory MP Michael Fabricant told The Telegraph: 'I am surprised that despite two reports now branding Bercow a bully, both Royal Holloway and Birkbeck still think that he is an appropriate person to engage young people's minds.'

It comes after an independent inquiry found Mr Bercow guilty of 21 claims made against him relating to behaviour during his decade as Speaker from 2009 to 2019.

The former Tory MP - who has since defected to Labour - has denied the allegations and described the investigation a 'travesty of justice rooted in prejudice, spite and hearsay' and carried out by a 'kangaroo court'.

The standards watchdog branded the ex-Tory MP a 'serial liar' and ruled his treatment of three staff would warrant expulsion from the Commons had he not quit in 2019.

In a report, Parliamentary Commissioner for Standards, Kathryn Stone, found him guilty of 21 claims made against him relating to behaviour during his decade as Speaker from 2009 to 2019.

Ms Stone upheld 21 out of 35 counts brought by Lord Lisvane, the former clerk of the Commons, and former private secretaries Kate Emms and Angus Sinclair.

The panel, chaired by former appeal court judge Sir Stephen Irwin, said: 'The findings of the Parliamentary Commissioner for Standards, which we have upheld, show that the respondent has been a serial bully.

'His evidence in the investigations, the findings of the commissioner, and his submissions to us, show also that the respondent has been a serial liar.

'His behaviour fell very far below that which the public has a right to expect from any Member of Parliament.'

Following the suspension, a spokesman said there is a 'zero-tolerance approach' to bullying in the Labour Party.

A spokesman for leader Sir Keir Starmer told reporters: 'The Labour Party has got a zero tolerance approach when it comes to bullying.

'I've got nothing further to add to what was said yesterday, in terms of the party looking at this and suspending John Bercow.'

Asked why Mr Bercow had not been immediately expelled, he replied: 'I can't comment on individual cases.

'You'll appreciate that in all of these disciplinary matters, there is a due process that needs to be followed, and that will be applied in this case.'