how to take off a phone case

Sask. mother says she begged police to protect her 13-month-old in the hours before he was found dead

The Prince Albert, Sask., mother of 13-month-old Tanner Brass is speaking out, saying she repeatedly begged police to help in the hours before her baby was found dead.

Kyla Frenchman said she was already panicking when the two police officers arrived.

She was standing outside her Prince Albert apartment building in the February cold. She said she'd just been kicked out of her apartment. Her partner, Kaij Brass, was still inside with their 13-month-old son, Tanner.

Frenchman said the officers told her to wait outside and entered the apartment building. They came out shortly after and said no one answered their knock on the unit door, she said.

"It really broke me," Frenchman said.

Frenchman said she frantically demanded the officers enter the unit to check on Tanner. Instead, Frenchman was arrested, handcuffed and driven to the police station for suspected intoxication, an allegation she denies.

Police returned to the apartment several hours later and found Tanner dead. Brass has been charged with second-degree murder. He is currently in custody, and the case has been adjourned until March 25. He has not yet entered a plea.

"I feel angry toward the police for not helping me. I basically pleaded to them that my baby was in danger," Frenchman said. "This isn't right. We deserve justice for what happened."

Frenchman agreed to tell her story in an interview Wednesday afternoon with CBC News. She was joined in a Saskatoon boardroom by supporters, including her sister, a mental health worker, her lawyer and a Federation of Sovereign Indigenous Nations official. Before the interview began, they prayed with an elder.

The 45-minute session was punctuated by long pauses, crying and breaks for Frenchman to decide if she wanted to continue.

The case has outraged First Nations leaders and others. They say this is a clear example of police racism against Frenchman, who lives in Prince Albert but is a member of the Thunderchild First Nation.

"She called them for help. They incorrectly assumed she was drinking. They put her into cells. Her baby died. She is the victim of discrimination," said her lawyer Eleanore Sunchild, also a Thunderchild member.

They are demanding the immediate firing of police Chief Jonathan Bergen and any officer who knew the baby was in danger.

On March 3,Bergen said he would wait for the results of the investigationfrom the Saskatchewan Public Complaints Commission before taking any possible action. The five officers under scrutiny all remained on duty.

One week later, after seeing preliminary results of the investigation,Bergen suspended two of them.

One day after that,the union representing the officers publicly released an earlier surveyshowing 95 per cent of officers have lost confidence in Bergen.

This week, an official with the Prince Albert Police Service directed questions to the Saskatchewan Public Complaints Commission.

Director David Wade said the commission sent out requests to interview the officers this week and hopes to have the investigation completed by the end of March. The results will then be handed to Crown prosecutors to decide whether charges are warranted.

Wade said he understands the importance of the case. He said the commission is working as quickly as possible, but wants to ensure things are done properly.

Frenchman said Wednesday that she'll cling to the happy memories of her son.

"My baby was a happy little boy. He loved watching Blue's Clues. He liked dancing. He loved taking a bath," she said.

"I wanted to give him the life I never had."

WATCH: Frenchman says her baby might still be alive if police had listened to her pleas for help

5 days agoDuration 0:29Kyla Frenchman says her baby might still be alive if police had listened to her pleas for help. Tanner died last month in a Prince Albert apartment. Tanner's father, Kaij Brass, has been charged with 2nd-degree murder. 0:29

But Frenchman said most memories are not happy ones.

Frenchman said Brass was kind and happy when they started dating a couple of years ago. But after Tanner— her first and only child — was born, Brass soon began to isolate her from friends and family, she said.

"He told me they were too toxic to be around and they were no good for me," she said.

Frenchman said that in the hours before Tanner died, she told Brass she wanted to talk. She planned to tell him that she was going to leave.

Brass went out, came back with a bottle of whiskey and drank it all before passing out, Frenchman said. She said she'd had a small amount of marijuana hours earlier, but did not drink any alcohol or take any other drugs.

When Brass woke up, they began to argue, Frenchman said. She said he told her she needed to have more children, and that he was tired of her.

"I decided to pack my things. I put on my jacket and hat," Frenchman said. 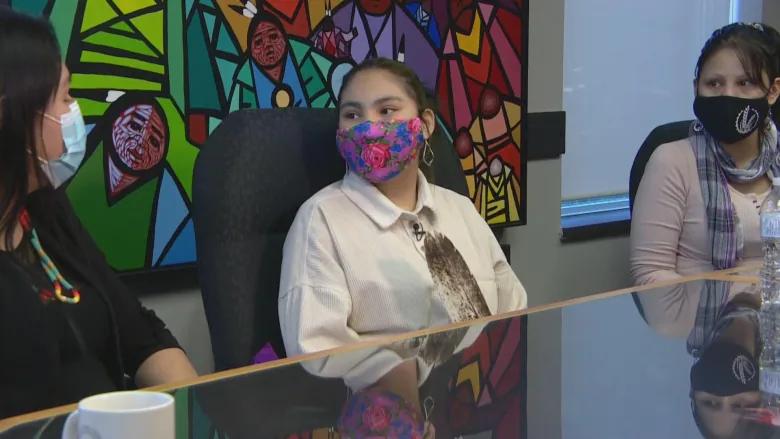 That's when he became abusive, she said.

"I was so scared," she said. "He told me to get off the property and to go die."

Frenchman, without a cellphone, walked to what she thought was her aunt's home, but when she arrived she realized her aunt had moved since her last contact a year earlier. Frenchman walked to the nearby RCMP detachment and knocked on the door, but no one answered.

She decided to walk back to the apartment to get Tanner and pack her belongings. Brass confronted her at the building entrance yelling, "get off my property. You're trespassing," she said.

Frenchman said she noticed blood on Brass' face before he chased her away.

Frenchman knocked on several neighbours' doors before someone let her use the phone. She called Prince Albert city police.

"I told them my baby could already be dead," she said.

Two officers arrived and Frenchman told them Tanner was in danger. The police entered the apartment building and told Frenchman to wait outside, she said.

That's when she was arrested, handcuffed and driven to the police station.

"I was scared. I thought I did something wrong," she said. "I was worried, fearful, stressed out, tired, hungry, cold."

Frenchman said she repeatedly told officers and staff in the station's booking area and holding cells that she wasn't drunk, and that her baby was in danger.

"They said I was drunk and I was the problem. They wouldn't listen. They told me to get some rest," she said.

Frenchman said that when she was released several hours later, she was afraid to go home alone. She went to a shopping mall to contact a child support worker to accompany her.

When Frenchman arrived at the apartment complex, the first thing she noticed was yellow police tape. She said officers wouldn't let her go inside, and wouldn't tell her what was happening.

She stood outside for 30 minutes before police drove her back to the station.

"We've got some bad news," an officer told her.

For the past month, family members, Indigenous social workers, elders and others have been working to support Frenchman.

Frenchman said she's grateful, but what she really needs is justice.

Sunchild said the case has tragic similarities to another. Sunchild also represented the family ofColten Boushie, the Red Pheasant Cree Nation man killed in a Saskatchewanfarmyard several years ago. She said they worked hard to prevent other Indigenous families from suffering from racist police practices, but Tanner's death shows it's still happening.

Sunchild said it might take a civil lawsuit against police to get their attention and prompt change.

For now, Frenchman said one question repeatedly pops into her head: How did Tanner die? She said police told her to wait "a few weeks" for details. It's been more than a month.

The Federation of Sovereign Indigenous Nations (FSIN) held a press conference Friday morning in Saskatoon in support of Frenchman.

"That means this event is of such significance, all of Canada should be aware and share our outrage," Bear said.

The police officers that did not help Frenchman, do not value First Nations lives, she said.

"Long have our people held the belief that we have been treated differently by police. This event is a real example of one of our precious women, a woman and her child suffering at the hands of police in a way that is so uncompassionate. This would be inappropriate in a Third World country."

FSIN Chief Bobby Cameron said Frenchman has a long road of healing ahead of her and needs justice for Tanner.

"All those happy memories that he should have had were taken away that night by a couple of Prince Albert Police Service officers and their lack of duty to uphold their responsibilities," Cameron said.

He said there needs to be an immediate change within Canada's entire justice system.

"Should Kyla and her family want to seek legal action, seek a human rights case … we are going to support her. We are going to go that distance. Even if we have to die going the distance ... Those officers in action must be terminated and be held accountable."

Automotive Battery Management System Market to be worth US$ 15.31 Billion by the year 2029 - Comprehensive Research Report by FMI