‘Slow progress is better than no progress’ | What has changed four years after Stephon Clark’s death?

SACRAMENTO, Calif. — Ask Sequette Clark what Mar. 18 means to her, and she’ll tell you in no uncertain terms.

On this day, in 2018, two Sacramento police officers shot and killed Stephon Clark. They were chasing him on suspicion of damaging cars along a residential street in South Sacramento’s Meadowview community. Clark fled to his grandmother’s backyard, nearby. That’s where the officers fatally shot him. The Sacramento Police Department says the two officers thought the cell phone Clark was holding was, instead, a gun.

About a year later, Sacramento County District Attorney Anne Marie Schubert announced she would not be pressing charges against the officers — a decision that left the Clark family feeling robbed of justice, they told ABC10 at the time.

Since Clark’s killing, however, the family says they have seen — and been a part of bringing about - positive, encouraging change.

"Slow progress is better than no progress,” Stevante Clark told ABC10 outside the State Capitol Friday at the Justice and Accountability March, which he organized through the I Am SAC Foundation, an organization he created in his brother’s name.

He points to AB392, called the Stephon Clark Law, which Gov. Newsom signed in 2019, “which updated the use-of-force policy when officers are allowed to use their weapons, changing it from 'reasonable' to 'necessary,'" Clark explained.

Sequette Clark said she is encouraged to see that law being used by prosecutors.

"Officer Aaron Russell in San Diego was just convicted underneath the Stephon Clark Law for the murder of [Nicholas] Bils, so that is change,” she said.

Advocates also point to a 2020 state law banning certain chokeholds by law enforcement, as well as another 2020 law, which now requires the state attorney general's office to investigate any officer-involved shooting that results in the death of an unarmed person.

Locally — in addition to the I Am SAC Foundation — the Clark family established Stephon's house, a site for resources and healing for the Black community. 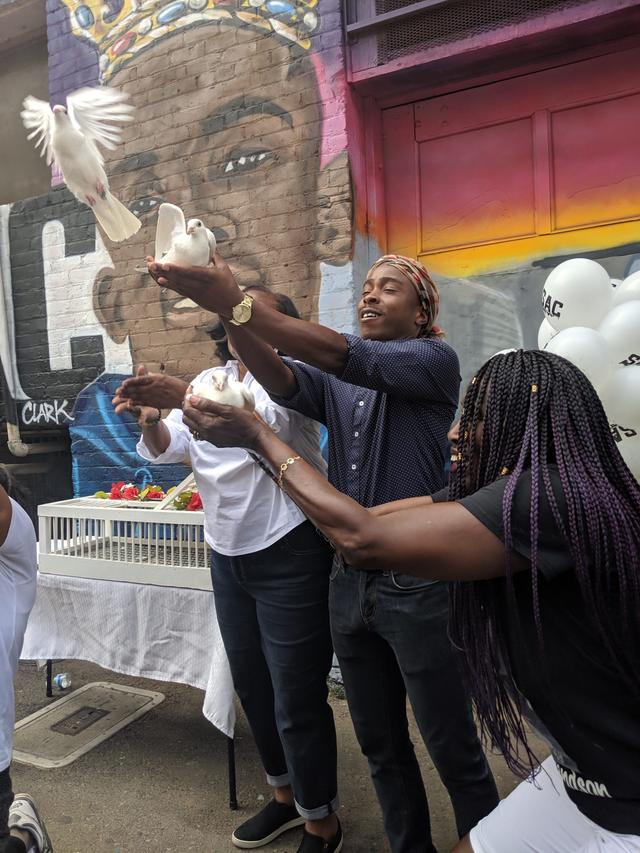 "You know, it gives you hope, but when you see things like the George Floyd Policing Act fail…when you see officers get away with immunity when you see the Police Officers Bill of Rights, it feels like we're taking steps backwards,” he said.

Wanda Johnson knows the feeling. A BART police officer killed her son Oscar Grant on Jan. 1, 2009, at the Fruitvale BART station in Oakland.

"Our people continue to be stereotyped, and this should be eliminated and end,” Johnson told ABC10. “All people should be treated equally and fairly and justly."

She and the Clarks are two of many families who, at Friday's event, shared their stories of loved ones killed by police.

Denise Friday Hall is one of those mothers. Her son Colby Friday was killed by Stockton Police in August 2016, after he was mistaken for a suspect.

According to Stockton police at the time, Officer David Wells confronted Friday, saying he matched the description of a robbery suspect. At one point, Friday ran away from Wells. Police said Friday stopped running and fought with Wells, which is when the shooting happened.

Last year, the city settled a wrongful death lawsuit with the family for $3.24 million. Officer Wells remains on duty with Stockton PD. Then-Police Chief Eric Jones told ABC10 Wells was disciplined for not turning on his body camera. The district attorney declined to prosecute Wells.

Friday Hall said she would like to see her son's case re-opened, along with the cases of other people killed by police where district attorneys declined to prosecute the officer.

"We have so many families," she said, adding that in some cases — the person who was fatally shot was having a mental health crisis.

"When the police go out, they should send mental health professionals along with the police, so that way — if a situation need to be analyzed, it could be analyzed on the spot," Friday Hall said.

These families all say they will keep pushing for change.

The Clark family said they're excited to see the new Stephon Clark College Preparatory Middle School open this fall through the Fortune Schools — that will be in Meadowview, the same South Sacramento community where Clark was killed by police.

1/10ABC10Download the ABC10 app for weather forecast localized to where you are.Plus, track storms with live radar.

Watch: What does a new subvariant of Omicron mean for California? | Rynor Report

How (well) to dry the charging port of your mobile phone: there is a solution

The 4 Best Selfie Sticks For iPhones