California's brazen shoplifting epidemic laid bare: Teens loot a Walgreens while a female thief casually strolls out of Ross with armfuls of sneakers

By Adam Manno For Dailymail.Com

Videos from California showing teens looting a Walgreens and a shoplifter casually strolling out of a Ross clothing store with multiple pairs of shoes have surfaced as retail stores battle an increase in shameless shoplifting.

In footage from Walgreens that surfaced Sunday, three people pry open a locked shelf and fill garbage bags with merchandise.

Customers and staff watch helplessly as the store is ransacked. At one point, a new customer walks in with a cart and quickly notices the brazen theft happening to his left.

In video from the discount retailer Ross, a woman walks out of the store with multiple pairs of shoes hanging from her hands. The alarm goes off as she nonchalantly walks out of the shop and into the dark street.

Instagram user @ppv_tahoe, who posted the video, says it was the same Ross location where a man was filmed walking out with an overflowing cart earlier this month.

Both thefts appear to have taken place in California, according to social media posts, but their exact locations have not been verified.

Videos of bold shoplifting, often involving groups of people, have become more common during the COVID-19 pandemic, with some blaming massive layoffs and economic instability for the spike in crime. Others point to prosecutors who have de-prioritized shoplifting, along with laws, like one in California, that make theft under $1,000 a misdemeanor.

A 2021 retail security survey by the National Retail Federation found that half of respondents saw an increase in shoplifting in the year prior. About 69 percent of retailers said they've experienced a significant increase in 'organized retail crime.'

Scroll down for video

In a video from a Ross retail store in California, a woman walks out with several pairs of sneakers hanging from her fists

It appears to be the same Ross where a man, above, filled a shopping cart with merchandise and walked out earlier this month

Walgreens and Ross did not immediately respond to questions about the videos from DailyMail.com.

CVS, which operates retail pharmacies similar to Walgreens, has been plagued by a 300 percent increase in retail theft since the pandemic began, the company confirmed to DailyMail.com.

In video from Walgreens posted by WorldStarHipHop, the thieves appear unconcerned as they are filmed and watched by other shoppers. They wore face masks, which helped conceal their identity from the cameras as they violently pulled product from the shelves.

At the Ross, a female shoplifter wore a leopard print winter hat and a coat as she walked off with the shoes.

A social media user who posted the video said it was the same store where another incident happened earlier this month.

CVS was has been plagued by a 300 percent increase in retail theft since the pandemic began (Pictured: Empty shelves at an Upper East Side CVS in January)

A Hell's Kitchen Rite Aid store is closing its doors after $200,000 worth of goods were stolen in December and January

In that video, a man in a brown jacket and a blue surgical mask takes only a quick glance behind him before confidently strolling out the sliding doors.

A pole on the cart - which is there to prevent cart theft - catches on the door, but that doesn't stop the thief who tugs vigorously until the pole breaks.

The cart begins tipping sideways but, unbothered by the obstacles, the thief manages to grab a trash bag from a nearby garbage, and shove the clothes and shoes into it. In the meantime, customers are seen entering and exiting the store without sparing him a second glance.

When he tries to lift the bulging bag, shoes tumble out - and he resorts to Plan B: taking the whole garbage can with him. He shoves everything into the bin and drags it through the parking lot.

In video from the same Ross store earlier this month, a pole on the cart catches on the door, but a thief tugs vigorously until the pole breaks

The cart begins tipping sideways but the thief manages to grab a trash bag from a nearby garbage, and shove the clothes into it.

He even stole the store's trash can to haul his goodies away. Theft has been on the rise across California's major cities as many politicians implement woke policies that lower crimes like theft from a felony to a misdemeanor

Leaders in the retail industry - which was already hard hit by the impacts of the pandemic, labor shortages and supply chain interruptions - argue theft has gotten out of control and security guards have their hands tied, as they are told to 'observe and report' and not get physical with criminals. 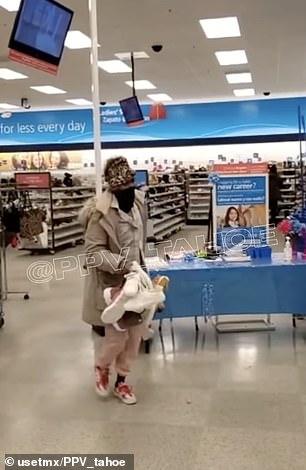 Crime has become so rampant that even the Rev. Al Sharpton has called on New York City Mayor Eric Adams to crack down on shoplifting, saying basic items such as toothpaste are now locked up at local pharmacies to try and prevent theft.

In New York City is so high that a Rite Aid pharmacy in Midtown Manhattan announced that it would close after losing more than $200,000 in merchandise to theft in December and January, according to the New York Post.

'It's out of control — it is just out of control,' Lisa LaBruno, SVP of operations and innovation at the Retail Industry Leaders Association, told Axios earlier this month.

Proposition 47 was passed by California voters on November 5, 2014.

It made some 'non-violent' property crimes, where the value of the stolen goods does not exceed $950, into misdemeanors.

It also made some 'simple' drug possession offenses into misdemeanors, and allows past convictions for these charges to be reduced to a misdemeanor by a court.

Under California law, though, if two or more persons conspire to 'cheat and defraud any person or any property, by any means which are in themselves criminal' they can face no more than one year in county prison, a fine of $10,000 or a combination of the two.

The CEOs of nearly two dozen retail companies have called on Congress to pass the INFORM Consumers Act, which would require online marketplaces like Amazon and eBay to verify sellers and allow buyers access to seller verification and contact information.

'As millions of Americans have undoubtedly seen on the news in recent weeks and months, retail establishments of all kinds have seen a significant uptick in organized crime in communities across the nation,' the store leaders wrote in a letter to Congress.

'Leading retailers are concerned about the growing impact organized retail crime is having on the communities we proudly serve, which is why we strongly support the bipartisan and bicameral Integrity, Notification and Fairness in Online Retail Marketplaces (INFORM) for Consumers Act.'

The CEOs claim the INFORM Acts will 'modernize consumer protection laws' and protect community members from the sale of illicit products. They are urging Congress pass the bill quickly.

Brian Dodge, president of the Retail Industry Leaders Association, told Axios in December that re-selling stolen goods online has become a 'low-risk crime' because thieves can sell the products to unsuspecting customers while 'hiding behind fake usernames and untraceable email addresses rather than legitimate kinds of business information that any other operating business would have to provide — like a name.'

Attorneys general in California, Arizona and New Mexico are setting up anti-shoplifting task forces in an effort to combat crime. They are also re-evaluating their bail reform laws and felony thresholds.

Retailers claim that although they 'constantly invest in people, policies, and innovative technology to deter theft, criminals are capitalizing on the anonymity of the Internet and the failure of certain marketplaces to verify their sellers.'

In New York, a shoplifter at a Queens CVS stabbed a manager in the hand and fled with cough medicine and hair products on February 15.

An unknown man entered the store in Forest Hills at around 12.24pmand began grabbing cough medicine and hair products off the shelves, attempting to walkaway with the merchandise, the NYPD said.

A shoplifter stabbed a manager at a CVS in Forest Hills, Queens, on February 15

Police said the unknown suspect entered the store at around 12:24 and began taking cough medicine and hair products off the shelfs

New York City has seen a nearly 50 percent spike in criminal incidents this year when compared to the same span in 2021. Felony assaults have increased by more than 20 percent, while shootings are up by a marked 30 percent

The suspect then stabbed a 44-year-old male manager in the hand, running away in an unknown direction, and the victim was taken to a nearby hospital. He was reported to be in stable condition.

Robberies in the Big Apple have gone up from 1,076 by this time last year to 1,452 cases reported so far this year.

The number of shooting victims in the same time period also went up by nearly 30 percent, and rapes have also seen a dramatic spike of more than 35 percent.

Overall crimes has gone up by nearly 42 percent.

In December, a woman carrying a pickaxe in broad daylight casually walked into a Los Angeles Rite Aid, stole merchandise and threatened store employees and customers.

The women threatened employees and cursed out shoppers witnessing the crime

The bizarre footage captured the moment the unknown woman dragged a basket full of merchandise across the floor of the Rite Aid, in Venice, California.

She seems to be headed for the door, with basket and pickaxe in hand, before stopping by the counter and telling an employee she'll come back.

'I'm not f*****g around,' she says as an employee tries to ask her to stop as she makes a grab for beauty products.

Before leaving, she tells everyone at the store, 'Don't say sh**. Shut the f*** up. Be quiet and follow suit.'

How Do You Charge Your DC Phone With an AC Source?

www.thegamer.com PUBG: The Game That Changed Everything, Five Years On