how to unyellow a clear phone case

The absurd Supreme Court case that could gut the EPA

West Virginia v. Environmental Protection Agency is a case about an environmental regulation that no longer exists, that never took effect, and that would not have accomplished very much if it had taken effect. If the plaintiffs prevail in their case, they will be in the exact same position they are in right now. It is a case about nothing.

Yet West Virginia could also be the most consequential environmental case to reach the Supreme Court in a very long time. The plaintiffs in this case, and in three other consolidated cases, seek an opinion from the Supreme Court that would do considerable violence to the Environmental Protection Agency’s power to, well, protect the environment. And if the Court indulges them, the fallout from this decision could wreak havoc throughout the federal government.

The cases involve the Clean Power Plan, an Obama-era effort to fight climate change. When this plan was announced in 2015, it was widely touted as President Barack Obama’s most ambitious climate policy initiative. Obama’s EPA predicted that, by 2030, the Clean Power Plan would lower carbon emissions from power plants by about a third below where they stood in 2005.

When the Clean Power Plan was announced, the coal industry and many red states treated it like the apocalypse, warning that the plan would cause “tens of millions of tons of lost coal production, thousands of lost jobs in the mining industry, and rippling unemployment effects for those dependent on the coal industry.” Four days before Justice Antonin Scalia’s death temporarily deprived Republicans of a majority on the Supreme Court, the Court voted along party lines to suspend the plan.

Less than a decade later, however, things look — well, different. Although the Clean Power Plan was blocked too fast for it to accomplish anything, the energy sector achieved its 2030 goals for emissions reductions by 2019. As the EPA explained in 2019, many power companies retired older, dirtier coal-fired plants because they were more expensive to operate than technologies such as natural gas or renewable energy. (Coal executives also complained that unrelated Obama-era rules restricting mercury emissions also led them to shut down coal plants.)

As it turns out, the plan’s original goals were too unambitious to matter. Market forces and other regulations achieved those goals, and they did so much faster than anticipated.

Nevertheless, a small army of litigants are now in the Supreme Court asking the justices to strike down the Clean Power Plan — which, again, is not in effect right now, which never really took effect, and which President Joe Biden’s administration does not plan to reinstate.

But while it’s not at all clear that the Supreme Court has any business hearing this case — federal courts do not have jurisdiction to hear lawsuits where there is no live dispute between the two parties — the stakes in this case are still quite high. The plaintiffs challenging the nonexistent Clean Power Plan rely on arguments that, if taken seriously by the Supreme Court, could permanently strip federal agencies like the EPA of much of their authority to regulate.

And so we wait, to see whether the Court will use a case about nothing to ensure that the Biden administration never does anything meaningful to fight climate change.

As a general rule, a plaintiff who wishes to challenge a federal policy must show that they were injured in some way by that policy, or federal courts are not allowed to hear their case. This limit is supposed to bind all levels of the federal judiciary, including the Supreme Court. If, the day before the Supreme Court hands down a major decision, the policy that animated that suit ceases to exist, then the Court typically must dismiss the case (with a few complicated caveats).

In Lujan v. Defenders of Wildlife (1992), the Supreme Court laid out several hurdles that all plaintiffs must overcome if they wish to bring their case before a federal court. Among other things, a plaintiff must not only show that they are injured in some way by the defendant’s actions, this injury must be “actual or imminent” and not “conjectural” or “hypothetical.“

In American Lung Association, the appeals court determined that Trump’s EPA relied on a “mistaken reading of the Clean Air Act” when it repealed the Clean Power Plan and replaced it with a different policy. This decision didn’t simply strike down the ACE rule, moreover, it also arguably struck down the Trump administration’s decision to repeal the Clean Power Plan. Thus, for a brief moment, the American Lung Association decision appeared to breathe life into the Obama administration’s zombie plan.

But if Clean Power Plan stans hoped to see this policy implemented, their hopes were swiftly dashed. Shortly after American Lung Association was handed down, Biden’s EPA announced that it did not read that decision to reinstate the plan. “As a practical matter, the reinstatement of the CPP would not make sense,” the EPA explained in a very brief memo,in large part because, as already mentioned, its goals were already accomplished.

Then, to cement this understanding, the EPA asked the appeals court to stay the parts of its decision that arguably reinstated the Clean Power Plan while the EPA writes an entirely new rule — and the appeals court granted this request in a February 22, 2021, order.

The result is that there is currently no rule in effect governing the power plants that would have been regulated by the Clean Power Plan. Trump’s rule is dead, and the only court order that could be read to reinstate the Obama-era rule has now been stayed.

In theory, the appeals court could lift its stay — although the EPA has given no sign that it will ask the court to do so. And it is still possible that whatever new rule the EPA comes up with will injure the West Virginia plaintiffs in some way. 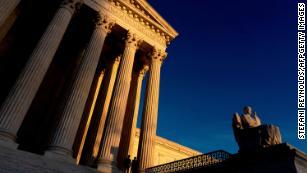 But recall that Lujan does not permit plaintiffs to bring a federal lawsuit if their injury is merely “conjectural” or “hypothetical.” All that the West Virginia plaintiffs have right now is conjecture that, at some point in the future, either the EPA or an appeals court might take some hypothetical action that might injure them in some way.

That’s not a valid basis to sustain a federal lawsuit.

The West Virginia plaintiffs ask the Court to answer a few closely related questions: Does the federal Clean Air Act permit the EPA to implement the Clean Power Plan (assuming, of course, that the EPA actually wanted to do so)? And does the Constitution permit Congress to delegate such authority to a federal agency?

The Clean Air Act requires certain power plants to use the “best system of emission reduction” that can be achieved with currently available technology, while also accounting for factors such as cost. But the question of what the “best system” is to reduce emissions at any given moment is a moving target — the technology that exists today is a great deal more sophisticated than the emissions-reduction technology that existed in the 1970s.

So Congress tasked the EPA with monitoring technological advancements, and imposing stricter emissions standards on power plants when new developments make it possible for those plants to achieve more ambitious emissions reduction goals.

The Clean Power Plan was supposed to be the Obama-era EPA’s best effort to comply with this obligation, but the coal industry and red states argued it had overstepped the Clean Air Act’s bounds.

Now the West Virginia plaintiffs raise several different legal arguments against the nonexistent Clean Power Plan, several of which could permanently hobble the federal government’s power to regulate if adopted by the Court.

A brief filed by several senior red-state officials, for example, rests heavily on the “major questions” doctrine, a legal doctrine that is currently fashionable among Republican judges but that was also invented entirely by judges and has no basis in any statute or provision of the Constitution.

The major questions doctrine claims that there are fairly strict limits on federal agencies’ power to hand down particularly impactful regulations. As the Court most recently stated in NFIB v. OSHA (2022), “we expect Congress to speak clearly when authorizing an agency to exercise powers of vast economic and political significance.” And several of the plaintiffs in West Virginia argue that the Clean Air Act isn’t sufficiently clear to justify a regulation like the Clean Power Plan.

One problem with this major questions doctrine is that it is vague. The Court has never explained what constitutes a matter of “vast economic and political significance,” or just how “clearly” Congress must “speak” to permit an agency to issue significant regulations. So, in practice, the major questions doctrine largely just functions as a veto power, allowing judges to justify blocking nearly any regulation they do not like. If a judge doesn’t like a particular regulation, they can just claim that it is too big.

The unusual history of the Clean Power Plan, however, should give the justices some pause about their ability to determine which regulations have vast significance. Seven years ago, the argument that the Clean Power Plan would require much of the energy industry to remake itself in order to comply with a new government mandate seemed plausible. Now the Clean Power Plan looks like a dud.

If the army of policy experts, industry analysts, advocates, and coal executives who all evaluated the likely impact of the Clean Power Plan in 2015 were so wrong, why should we trust nine lawyers in black robes to get this answer right?

Other briefs in the West Virginia case suggest that the Clean Power Plan violates the “nondelegation doctrine,” another judge-created doctrine that limits Congress’s power to delegate the power to issue binding regulations to federal agencies. This doctrine is even more vague than the major questions doctrine, and even more capable of being applied selectively to strike down regulations that a particular panel of judges do not like.

As Justice Neil Gorsuch described nondelegation in 2019, a federal law authorizing an agency to regulate must be “‘sufficiently definite and precise to enable Congress, the courts, and the public to ascertain whether Congress’s guidance has been followed.” How “precise” must the law be? That’s up to judges to decide.

Notably because this doctrine outright forbids Congress from delegating certain powers to an agency, a Supreme Court decision that struck down the Clean Power Plan on nondelegation grounds could permanently strip Congress of its power to authorize the EPA to issue major regulations in the future. Indeed, depending on how broadly the Supreme Court worded such a decision, it could impose drastic new limits on every single federal agency.

In any event, the issues at stake in West Virginia can be summarized fairly concisely. It is a case about a regulation that does not exist, that never took effect, and that would have imposed obligations on the energy industry that it would have met anyway. It also involves two legal doctrines that are mentioned nowhere in the Constitution, and that have no basis in any federal statute.

And yet, West Virginia could wind up permanently hobbling the government’s ability to fight climate change.

The best iPhone tripods for 2022