how to decorate clear phone case

The Left Has Good Answers on Ukraine

Russia’s invasion of Ukraine has forced the American left to fight on two fronts. Critics of American foreign policy—and I number myself among them—are making an urgent case against escalation, or the United States allowing itself to be drawn into open conflict with Russia. But instead of engaging our arguments on their merits, some people in the center and on the right are singling out versions of leftist anti-war sentiment, no matter how atypical, for ridicule.

A case in point: In late February, the Democratic Socialists of America (DSA) released a position statement on Russia’s invasion of Ukraine. The short, five-paragraph letter instantly inspired outrage—primarily because of a single sentence in its fourth paragraph. After condemning Russia’s invasion and urging diplomacy, de-escalation, and an immediate cease-fire, the statement’s authors added that the DSA “reaffirms our call for the US to withdraw from NATO and to end the imperialist expansionism that set the stage for this conflict.” Further remarks about American obligations toward refugees and preparing for a long-term response to this crisis followed, but so far as the majority of the reading public was concerned, the DSA might as well have said nothing else at all. Backlash followed swiftly.

Per the New York Post, the DSA had “blame[d] US imperialism” for the invasion; the article acknowledged that the organization had specifically condemned Russia for the brutal invasion only after a break punctuated by a prominent picture of Representative Alexandria Ocasio-Cortez, the group’s most notable public member. Fox News had a field day with the “Squad” connection, and, evidently fearing that the Democratic Party might be wrongly associated with the group’s statement, White House Rapid Response Director Mike Gwin quote-tweeted a link to the release with a curt dismissal: “Shameful.” On the left, the statement drew both defenses and condemnation. So significant was the controversy—especially relative to the scant power represented by the release itself—that it wound up with its own congressional denunciations and write-up in The New York Times.

Read: The war in Ukraine is just beginning

For an onlooking lefty dove, the most obnoxious aspect of the entire controversy was that it replaced a policy conversation with a moral conversation. The DSA statement expresses a series of leftist positions on American foreign policy specific to Russia’s invasion of Ukraine: The United States ought to prioritize de-escalation, support all efforts at a diplomatic resolution, and accept “any and all” refugees who need shelter in the wake of the crisis. The clause calling for the U.S. to withdraw from NATO links to a 2021 position statement from the DSA on that issue, which is a long-running—and orthogonal—leftist concern. (For leftist critics of NATO, American membership has long represented wasteful, warlike spending at home and a history of failed military campaigns putatively undertaken on behalf of liberal democracy abroad.) One need not affirm that wider viewpoint to affirm the group’s immediate policy proposals regarding the conflict at hand.

Of course, that argument barely had the opportunity to surface. Instead, most debate concerned whether the DSA had wrongly blamed the United States for Vladimir Putin’s attack on innocent civilians in Ukraine, and whether, as Gwin suggested, the group ought to be ashamed of that sort of blithe sedition. The tone of it all took me back to the pinched, stentorian discourse of the deep pandemic, when scores of articles sought to establish who, exactly, was to blame for this pathogen and its history-warping impact: the Chinese government? Reckless American bureaucrats? Maskless anti-vax extremists? Their office-holding, right-wing enablers? Open borders? Pangolins? 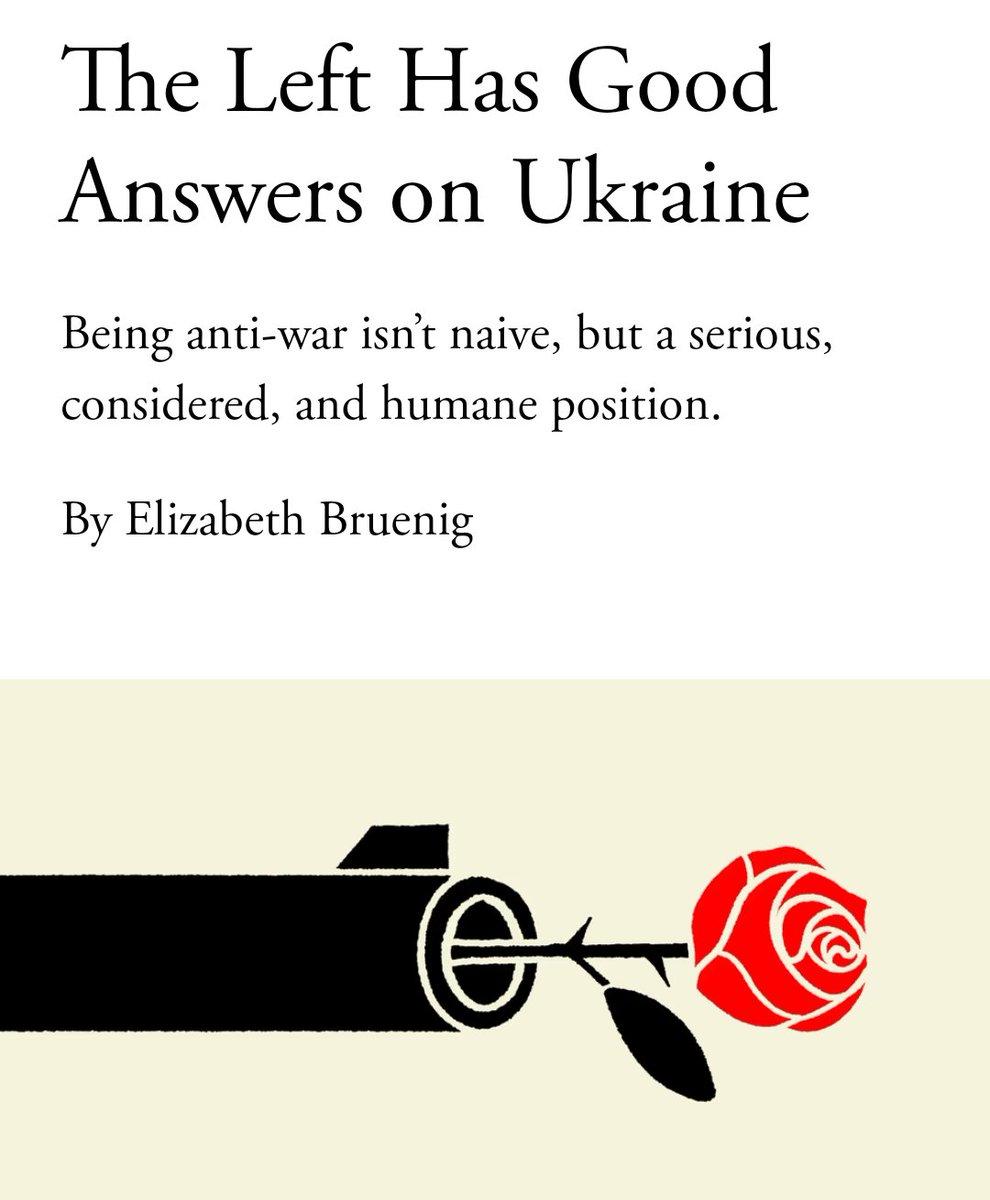 As it turns out, no decisive verdict on the moral debt owed by any one of those parties was necessary to make progress against COVID-19. Mainly, we needed vaccines that worked and a reliable method of distributing them. Figuring out who will answer to God for COVID-19 at the end of all things was not a part of that equation, just an entertaining distraction.

And so it goes with Russia, Ukraine, and the American left’s campaign against war. But the entertaining distraction isn’t the DSA’s position on U.S. withdrawal from NATO, or even assigning blame for Russia’s invasion of Ukraine; it’s America’s recapitulation of its long-standing certainty that the left is unserious, risible, ridiculous, and dismissable when it comes to matters of war and peace, and (one gathers via heavy implication) likely everything else. Some call it hippie punching. It’s an American classic.

Read: Nine books to read to understand the war in Ukraine

Perhaps boisterous critics of the DSA’s statement were hoping its anti-war position would meld with its remarks on NATO and U.S. imperialism in the minds of the public, then be banished together as twin heresies. But the leftist position that American military intervention in Ukraine—as in, for instance, directing American and NATO forces to shoot down Russian planes flying over Ukraine—is unwise and unwanted by the electorate remains credible and well attested in the mainstream. Since the beginning of Russia’s incursion into Ukraine, Senator Bernie Sanders has led the left with calls for sanctions, emergency preparations for refugee resettlement, and stalwart hope for a diplomatic resolution—just as DSA did—as well as a green-energy shift away from the oil and gas that fund Russia’s military. Rather than clash with hawkish members of Congress who would prefer escalation, Sanders has limited his remarks to what aid to Ukraine ought to look like: swift, decisive, humanitarian, without the heedless sacrifice of blood and treasure for no clear benefit that has marked the American experience of war abroad for the past 20 years.

Nor does the anti-war position mean, as some critics are wont to suggest, abandoning Ukraine. In his address to Congress on Wednesday morning, Ukrainian President Volodymyr Zelensky made several requests of the United States that are perfectly compatible with a leftist vision of American foreign policy. He asked, for instance, that the United States target all Russian politicians currently holding office with economic sanctions, and that all American companies immediately stop doing business with Russia; though each measure would certainly have unfortunate consequences for ordinary Russians, who are not at fault for Putin’s war, their effects would likely be less devastating than an outright military conflict between the two superpowers. Zelensky also urged Americans to continue our efforts to cut off the flow of U.S. dollars into Russia—which underscores the crucial necessity of an energy transition that could help wean this country off of Russian oil and gas, something the left supports wholeheartedly. And he hoped for humanitarian aid—which the United States should deliver with neither limitation nor delay.

There were things Zelensky wanted that he himself seemed to know he could not reasonably expect to receive: He acknowledged that a no-fly zone over Ukraine, for example, might well be “too much to ask.” Instead, he proposed that the United States and its allies continue to arm Ukraine, possibly with aircraft, a move the Biden administration recently vetoed—and not without good reason. Although there may be no rational distinction between forms of American aid to Ukraine that are not viewed by Putin’s regime as provocations and forms of aid that are viewed as such, there is nevertheless a political distinction between the two: One carries relatively little risk of escalating a conflict between two nuclear powers and the other carries a substantially heightened risk of the same. Thus the Biden administration ought to continue to take care to offer maximal support to Ukraine without triggering a Russian response that would intensify conditions on the ground and potentially make an already cataclysmic situation that much more hellish.

In an announcement following Zelensky’s address Wednesday, Biden promised another $800 million in aid to Ukraine, while renewing his vow not to join the conflict militarily.

Though certain politicians have pressed Biden to risk more intervention than he seems willing to venture, the president has thus far remained steadfast in his decision not to send troops to Ukraine and is still holding out against demands to enforce a no-fly zone. Putin’s savagery in Ukraine is despicable—a despotic onslaught that has already put babies and children in frozen graves. What Biden appears to suspect is that military intervention will only furnish the pits with further corpses. For him, as for Sanders, as for the DSA, as for me, as for plenty of war-weary Americans, the nuclear stakes are too high, the possibility of world war too imminent, the likelihood of success far too remote. There’s nothing ill-considered or naive about that.