who created the first phone case

Catalina de Erauso is a difficult historical figure to define. On the one hand, she is a Spanish conqueror who massacred indigenous people, and on the other, she is a transgender icon who defied gender norms at a time when the concept of transgender did not exist in the public consciousness.

Much about Erauso, who is also known as “La Monja Alférez” in Spanish, or The Lieutenant Nun, is shrouded in mystery. It’s known that she was born in San Sebastián in Spain’s Basque Country, but there is no exact birthdate: it could have either been 1588 or 1592.

Erauso was sent to a convent to be trained as a nun, but escaped and evaded capture by dressing as a boy. From that moment on, she created a number of personas. Sometimes she presented herself as a woman, but nearly always she dressed as a man, going by names such as Pedro de Orive, Francisco de Loyola, Alonso Díaz and Antonio de Erauso.

She was reportedly granted an audience with Pope Urban II, and even received a pension from King Felipe IV for her military services in the Americas colonies. Most of what is known about Erauso comes from her autobiography, but many researchers doubt the authenticity of the text, arguing that at the very least it is filled with sections that were added at a later date.

But perhaps the main reason why Erauso is so hard to define is due to her exploits in the military. Erauso was responsible for the death of many people. Not only did she kill others in duels and squabbles, she also actively took part in the extermination of the indigenous people of the Americas in the service of the Spanish Crown. 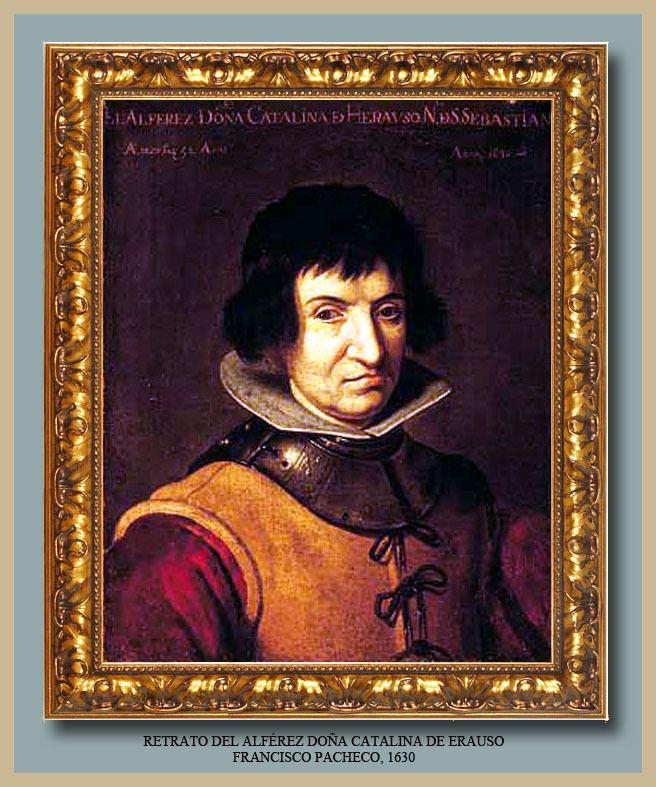 Now a new exhibition called Una voz para Erauso. Epílogo para un tiempo trans (or, A voice for Erauso. An epilogue for a trans time) by the art collective Cabello/Carceller, is shining a light on these complexities.

Trans philosopher Paul B. Preciado, who commissioned the exhibition, explains: “When you are gay, lesbian or trans, [Erauso] is a character that has special resonance, because she was almost a drag king in the middle of the Renaissance.”

The exhibit, which will be on display until September 25 at the Azkuna Zentroa cultural center in the Basque city of Bilbao, centers on a video in which three contemporary characters question Erauso about race, gender, class and religion. The questions are addressed to a portrait of Erauso that was made by Spanish painter Juan van der Hamen around 1625. The portrait, as well as a copy made in 1900, are also part of the exhibition.

The artists behind the collective, Helena Cabello and Ana Carceller, say that the painting may be the first portrait of a transgender person. “It was thought that the oldest was Chevalier d’Éon [by Jean-Laurent Mosnier in 1791] but, although we cannot unequivocally confirm that this is it [the oldest portrait of a transgender person], we haven’t found an earlier one,” say Cabello and Carceller, who point out that Van der Hamen chose not to emphasize Erauso’s feminine side, but rather “the soldier she wanted to be, with her scars and her warrior-like look.”

What’s more, the exhibition does not try to explain the historical figure from the perspective of today. “Erauso belongs to the 16th century, when notions of transsexuality or transgender didn’t exist,” says Preciado. “Cross-dressing did exist, and it was considered against nature and a heretic crime. This makes us think about how the concept of sexuality and gender have changed, from being an ecclesiastic category to a medical-legal status, and now we are fighting so that it simply becomes a way of life.” He adds: “Everyone can imagine how they would have been characterized in Erauso’s times: I, for example, would have been cooked by the Inquisition.”

Cabello/Carceller agree that it doesn’t make sense to project 21st-century concepts on a historical figure from the 16th century. In the exhibition, the video turns into a musical when it is Erauso’s turn to respond to the questions, and as Cabello/Carceller explain, these responses are fitting with Erauso’s context.

“Erauso was openly pro-monarchy, supported the empire and was proud of having killed, but was also a survivor,” they say. “So the responses [in the video] are along the lines of ‘yes, I’ve killed, so what? I would like to have seen you in my epoch.”