how to make a diy selfie stick

Before the end of year, two different groups from two different countries expect to launch extremely unusual but similar experiments into space. These experiments — and I can't believe I'm writing this — will test to see how well wood works as a structural component for satellites.

I'll admit to being skeptical this will work, but both ideas are pretty interesting, and if they do pan out it could change the way some satellites are made.

One group is from Japan's Kyoto University. Scientists at their Laboratory of Biomaterials Design will be launching a variety of special wood samples to the International Space Station sometime this year. The Japanese Kibo module on ISS has a facility where experiments sit outside the station, exposed to space, and the samples (in a roughly 10 x 10 centimeter metal frame) will be placed there for testing.

A panel containing wood strips being sent to orbit to test the space-worthiness of the material. Credit: Kyoto University

They will be exposed to the large temperature range of space, cosmic radiation, and, probably most importantly, atomic oxygen. Ultraviolet light from the Sun breaks up oxygen molecules in our atmosphere, creating independent oxygen atoms in the low Earth orbit environment. These atoms are highly reactive (which, to be fair, is in part why we breathe oxygen) and can corrode equipment in space. It's not clear how wood will react to it over time, which is why the tests are being done.

The experiment is expected to run for about six months, and then the panel will be returned to Earth for study. The big question is pretty much what you'd think: How well does wood hold up to the extreme conditions of space? Does its structure change, or its mechanical strength?

Artwork depicting Woodsat, a tiny satellite with literal wood panels on its exterior, in orbit. Note the selfie stick so it can take photos to check its exterior for degradation. Credit: Arctic Astronautics

The second group takes this even farther. Hailing from Finland, they are building a satellite out of wood to see how it holds up in space, and expect to launch it before the end of the year. 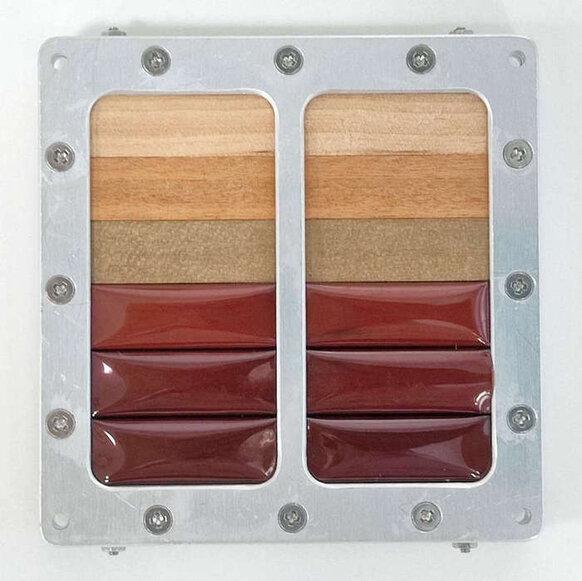 It's called Woodsat, and it's based on a standard Cubesat design — these are small nanosatellites measuring just 10 x 10 x 10 cm. You can hold one in the palm of your hand. In this case, though, instead of the usual metal framework, the exterior is made almost entirely of wood. Plywood, and birch specifically. The only metal on the outside will be rails along the face edges needed to deploy it in space.

Oh, and a selfie stick, so it can take photos of itself to send back to Earth for study (ultraviolet light from the Sun can chemically alter and darken the wood).

Onboard this wee satellite will be a handful of small experiments. One is a thermoplastic (plastic that can be melted and molded) called PEEK (for polyether ether ketone) that can be used as a printable electric conductor to deliver power; in this case it will power a small LED that can light up as a test that the circuit is working and a detector to sense when the LED is lit.

Another is a microbalance which will be able to detect incredibly small amounts of material that may get deposited on it from the onboard electronics and the wood. The third is a pressure sensor that will measure how much gas is in the satellite shortly after launch.

Those last two are pretty important. My skepticism on using wood is not just because of the structural or mechanical issues, but also because wood outgasses. Gas trapped in it is released over time even here on Earth; in space that process will be even stronger, and if that coats sensitive devices or optics with residue that could damage or be fatal for them. It could also short out electronics.

I remember when a camera I worked on was installed on Hubble in 1997, we had to wait a couple of weeks to even just switch on of our detectors. It used very high voltage, and the residual air from it being on the Space Shuttle could cause it to short out. At first the internal pressure blew out most of the gas from the camera when it was exposed to vacuum, but when the pressure was extremely low (though still too high for safety) we had to wait as the individual atoms bounced around randomly enough to leave the camera.

So wood outgassing is no joke, and I'm glad to see they have sensors onboard to measure it.

To test this, the Finnish group dried out some wood as much as possible in a thermal vacuum chamber — a tank from which they could remove the air and then heat up the wood inside. They deposited an extremely thin layer of aluminum to the wood as well to protect it, then hit it with atomic oxygen to see how it stood up. From their tests they think the wood in orbit should hold up well.

If this works it could be pretty interesting. For example, metal walls of satellites are great, but when hit by high-energy radiation from the Sun they can eject secondary subatomic particles at high speed like shrapnel, and this can fry electronics. Wood may not have that same problem. Also, wood is lightweight, inexpensive, and renewable in some sense, which are desirable qualities for space architecture.

I'll add that the Kyoto group, pending their initial results, is also planning on building a wooden satellite — called LignoSat ("ligno" means "relating to wood") — to launch in 2023.

The question is, will space wood work? Hopefully in the next year or so we'll know.