Over the past four years, DJI has steadily improved upon its mobile gimbals. Its latest, the OM 5 ($159), continues the trend. It has a durable telescoping arm, improved image stabilization, and support for larger smartphones such as the Apple iPhone 13 Pro Max and the Samsung Galaxy S21 Ultra. That said, the iOS experience still surpasses what you get on Android.

A Smaller Design for Bigger Phones

DJI gave its OM 5 a makeover for 2021. The chunky pistol-style grip has been replaced with a more traditional handgrip that takes up less space but isn’t as ergonomically friendly. The handle extends by 8.5 inches, so the gimbal does double duty as a selfie stick, and its magnetic clamp has been supersized to work with larger phones.

It's easy to find a spot in your bag for the compact OM 5.(Photo: Steven Winkelman)

At 10.4 by 4.4 by 3.6 inches (HWD) and 10.2 ounces, the gimbal is much smaller than the DJI OM 4 and can easily slide into a bag. That said, the compact form factor comes at a price: Unfolding it requires significant force, and the buttons aren't as easy to reach.

You Can Trust Our ReviewsSince 1982, PCMag has tested and rated thousands of products to help you make better buying decisions. (Read our editorial mission.)

The three-axis gimbal is built out of the same sturdy polycarbonate as its predecessor and is available in gray or a pinkish shade of white. In addition to the gimbal, there’s also an attachable tripod, a dust bag, and a USB-A-to-USB-C charging cable in the box.

The magnetic, spring-loaded smartphone clamp is bigger than the previous model, but it still seems like it’s made with iPhones in mind. If you use an Android phone, it can take some finagling to get the clamp situated so it holds the phone without pressing on the power button or volume controls. And if you’re using an extra-large phone, you’ll probably need to remove it from its case in order to squeeze it into the clamp.

The front houses a thumbstick, used to pan and tilt your phone, along with image capture and multipurpose buttons. The power button and zoom slider sit on the left side, and a USB-C charging port is on the right. A trigger button for camera selection and other features is on the back.

A non-replaceable battery provides power. It takes a few hours to fully charge, but it runs long, delivering more than half a day's use. As with all batteries, you’re going to notice some degradation over time, and we wish DJI had a battery replacement option.

The three-axis gimbal has a telescoping arm for selfies.(Photo: Steven Winkelman)

The rubberized tabletop tripod screws into the bottom of the gimbal. It's pretty basic and feels like it could crack under stress. It’s fine for basic vlogging and such, but you’ll want to swap it out for something a little sturdier if you plan to travel with it. Fortunately, the OM 5 has a standard quarter-inch tripod thread.

You can use the OM 5 in both portrait and landscape modes. To switch between the two, double-tap the multipurpose button. The zoom slider works well but tops out at the 8x setting. If you're looking to use the gimbal to help get steadier shots using an ultra-zoom phone like the Samsung Galaxy S21 Ultra, you'll need to swap to your phone's native camera app and lose access to the OM 5's on-handle controls. 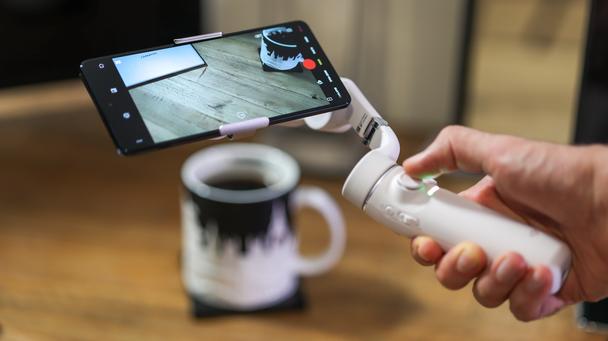 Great for iPhones, Good for Android

The OM 5 controls the DJI Mimo app via Bluetooth. Turn the gimbal on and sign in to the app, and it will connect automatically. The gimbal will stabilize your phone without the app, but you'll need to use Mimo for the buttons and sliders to work, and for app-specific video features.

The DJI OM 5's slimmer profile means buttons are not as easy to reach.(Photo: Steven Winkelman)

The biggest letdown is the difference in video quality between the iOS and Android apps. On iOS, there are multiple frame rate and resolution options, but on Android, you’re limited to 4K, 1080p, and 720p at 30 or 60fps. Slow Motion and Moonlapse are also missing from the Android app.

In addition, there are minor things that are just more frustrating in the Android app. For example, the thumb-slide joystick isn't as nimble as it is with an iPhone, nor does it allow you to switch among all the capture modes. Bluetooth connectivity needs to be reestablished each time you turn the gimbal on, and some of the tutorials will pop up multiple times or don't disappear until they’re complete.

Granted, a lot of these issues aren't DJI’s fault. Variations of Android power thousands of smartphone models and DJI would need to gain API access to at least the most common devices for full-throated app support. So it’s nice to know DJI isn't deliberately slighting Android owners, but that doesn’t make the experience any more enjoyable.

All that said, the OM 5 does an excellent job with video. The three-axis stabilization is based on the same concept DJI uses for its drones, Ronin gimbals, and earlier OM models, but the company improved the software this year, and the difference is noticeable. There are far fewer jerks and shakes than we experienced with the OM 4. The extension rod adds to the experience. In addition to functioning as a selfie stick, it lets you record in tight spaces and from tricky angles.

You can use the thumb stick to tilt and pan for framing your shot, but the app adds some useful automated movements. We're happy to see that ActiveTrack, a feature that moves the camera to follow a subjects, is improved. DJI has added up to 3x zoom support with tracking, and cut latency down to 5ms for smoother results. It’s a minor but noticeable update that improves your overall video quality.

The app also includes gesture controls, so you can start video by counting down with your fingers. That's handy for vloggers using the OM 5 on a tripod.

In addition to Hyperlapse and Timelapse video, both old hat and well developed at this point, iOS users also get a new Moonlapse feature. It moves the gimbal to capture the moon throughout the night. All three features work well, and Moonlapse is basically an improvement on last year’s Motionlapse feature, which required you to pick your own stop points.

Slow Motion is still limited to iOS. This year it actually works pretty well. With the OM 4, we noticed intermittent flickering, but in our tests of the OM 5, that was only a problem in dim light.

Other features continue from the OM 4 without any notable changes. Panorama mode uses preset stop points to create 240-degree panoramas. We found the feature to be a mixed bag. You'll get better Panorama results with an iPhone; on our Samsung Galaxy S20 Ultra, we saw warped distortion using the DJI app, absent from panoramas made with the phone's camera app.

DynamicZoom is slightly improved. The feature tracks subjects and uses rack focus to change the depth of field in video. If you’re an Android fan feeling envious of the iPhone 13’s Cinematic Mode, this is a good substitute, though your options to make changes in post are limited.

Story mode lets you pick from a selection of pre-defined templates to make visual storytelling simple. In Story mode, the DJI app does custom color grading, makes some tweaks to video focus and depth, and even adds in music for short videos. Depending on lighting and other variables, the end result will vary, and you’ll probably want to use this for quick social media shares.

The magnetic smartphone clamp on the DJI OM 5 can accommodate larger phones but centrally-placed buttons may be pressed by accident.(Photo: Steven Winkelman)

You can use the OM 5 to capture still images if you want, but it offers some drawbacks compared with what you'll typically find built into your phone. The computational tools that you've come to rely on, including basics like Night mode and Portrait mode, just aren't there.

Though optical image stabilization improves with every new flagship release, there are some limitations to what your phone can do. For Steadicam-quality results, your best bet is to shell out for a gimbal. If solid, steady video is your main goal, the DJI OM 5 is a great bet, no matter the phone you use. If you expect to rely on some of its more creative features, you'll enjoy a more polished, consistent experience with iOS. Android owners should dig into the feature set for the Android app before committing to a purchase.

The DJI OM 5 is a compact and inexpensive three-axis gimbal, but Android owners will miss out on some of its most exciting features.

How to Fix ‘It When a Fire Stick Overheats’ Issue