DJI just released the Osmo Mobile 5, a new smartphone gimbal, which includes a telescoping selfie stick (okay, sure, an “extension rod”) built right into the handle.

The OM 5 retains the same foldable design principle as its predecessors but with some minor changes. The gimbal is slightly smaller and lighter this year. And eagle-eyed users will notice the angle of the handle is more acute than before to accommodate for the 8.4-inch selfie stick. I worry it might make it less comfortable, but we won’t know until we actually check it out in person. There’s also a new button on the handle, which will let you quickly access some of the core OM 5 features. But with the changes in design, the battery life is taking a huge hit. While the OM 4 gimbal was rated for 15 hours, the OM 5 rating shrinks to six hours and 20 minutes.

When DJI introduced the OM 4, a standout feature was the pair of magnetic mounts that made attaching your phone to the gimbal effortless. But the mounts required extra effort to work with a larger than usual phone, especially if said phone had a case on it. Now DJI is upgrading the magnetic clamp so it stretches out even further. And no, just like last year, the magnets still aren’t compatible with Apple’s proprietary MagSafe magnets.

OM 5 also comes with improved gimbal motors and has added a new intelligent feature — Shotguides. The OM 5 scans your surroundings and gives you up to 30 sets of tips and directions on shooting videos with this gimbal. Once you have filmed all the recommended clips, it will auto-edit them into one polished video in DJI’s Mimo app. 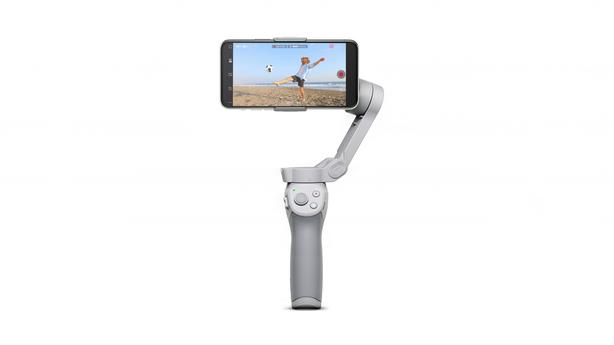 The rest of DJI’s other intelligent tracking features are also getting a performance upgrade. Active Track 4.0 now has improved facial recognition and facial tracking, which results in much more responsive performance.

All of the other preprogrammed shooting modes from the OM 4 can also be found on the OM 5 — the Hitchcockian dolly zoom, creative CloneMe Panoramas, and my personal favorite, SpinShot. Plus other standard modes we’ve seen before such as Hyperlapse, Timelapse, and Motionlapse.

DJI’s Osmo Mobile 5 will be available in 2 colors — Athens gray and sunset white. DJI is also selling a new optional $59 accessory, the DJI Fill Light Phone Clamp, which looks like a standard magnetic clamp, but with built-in lights to help brighten up your selfies.

With the release of the OM 5, the OM 4 is being renamed to OM SE, which is the same gimbal as last year, including the same old 15-hour battery life but with the upgraded magnetic clamp, all for $119.

Correction September 8th, 9:57AM ET: DJI’s press release incorrectly stated the price of the Fill Light Phone Clamp as $79. DJI contacted us after publication to note the correct price is $59.