The Insta360 ONE X2 action camera is a handy, pocket-sized, candy bar-shaped, action camera with two big fisheye lenses on the front and the back. Through algorithmic magic, it neatly stitches those recordings together to create 360-degree videos, so you can instantly record virtually everything going on around you, then go back and edit clips together showcasing whatever catches your interest.

Insta360’s nifty FlowState Stabilization ensures your recordings are super smooth, no matter what you’re doing. Combine that with its ruggedness and waterproof-to-10-meters nature (at least, if you don’t try to run a USB-C cable from the camera to your bike because you’re trying to not have to switch batteries on a long ride), and the ONE X2 seems like it could be a pretty solid motorcycle action cam. As a person who previously never used any kind of action cam before (I know), here’s what I thought about it.

When you first open the box, inside it you’ll find: an Insta360 ONE X2 camera, a 64gb Insta360-branded microSDXC card, a single 1630 mAh battery that can be charged either in the camera or in Insta360’s three-battery quick charging dock (sold separately), a charging cable, a neoprene sleeve that fits the camera, and a quick-start guide. The rubberized lens cap for the ONE X2 is also sold separately, but with the way those lenses stick out, you’ll probably want it. Insta360 says this camera can take up to a 1TB memory card as long as it's UHS-I, can operate at a speed of V30 or above, and is exFAT format. So, you have options.

Incidentally, if the thought of those exposed lenses makes you nervous when you’re mounting this camera to catch cool low-angle shots by your rear wheel, Insta360 also sells two different types of lens guards that fit the ONE X2. There’s a set of basic adhesive ones that honestly don’t look like they’d do much, and there’s the Premium Lens Guard kit that costs a bit more, but at least seems like it could take a crack or two from road debris and probably not transmit the damage to your camera lens. I did purchase the Premium Lens Guard for my review ONE X2 because it made me feel much better about taking it out for rides—and so far, while I’ve also been very careful with the camera, it seems to have done its job.

If you’ve already had action cams in your house (which I have; I just haven’t been the one using them), then you may already have ball-type mounts that will work with this camera. If not, naturally Insta360 has a variety of mounting kits geared toward all kinds of activities where you might want a camera like this. One thing I wish the company did was offer things like, say, a chest mount as a standalone item, as opposed to only offering it inside of one of the bigger mounting kits. For example, the Invisible Selfie Stick (which does work as advertised) is sold as a standalone item as well as packaged with other kits, which is thoughtful. 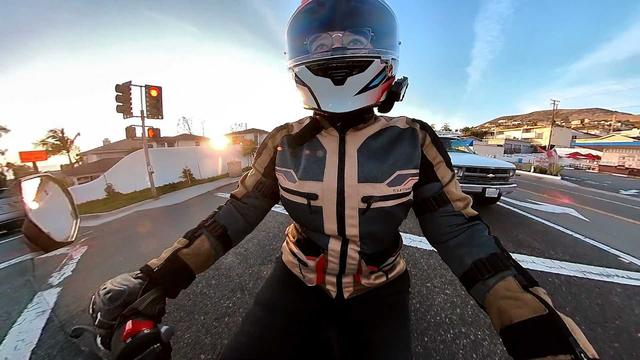 Here are some specs: The ONE X2 does 360-degree video in the following resolutions: 5.7K at 30fps, 25fps, and 24fps; 4K at 50fps and 30fps; and 3K at 100fps. Wide-angle steady cam mode is possible at 2560 x 1440 @ 50fps and 30fps, or 1920 x 1080 @ 50fps and 30fps. It can also take still photos directly from the camera, or you can choose individual frames from your videos and pull those out as screenshots after the fact. Steady cam videos are recorded in MP4 format, while all 360 videos are recorded in Insta360’s INSV format, which you can view and edit in Insta360’s mobile and desktop apps. The mobile app is, of course, available for both Android and iOS devices.

Available video modes include standard, HDR, timelapse, timeshift, bullet time (there’s an accessory kit for this as well), and steady cam. The ONE X2 does have a built-in microphone, but even with Wind Reduction turned on, you probably won’t find it very usable on its own to record all those great engine noises from your beloved bike. For that, you’ll probably want an external mic setup, and that’s where we get into something that’s a bit frustrating about the ONE X2.

You see, it’s completely possible to use an external mic with your ONE X2, as long as you get the Insta360 mic adapter module. It plugs into the USB-C port, which you can see in the photos—which tosses the notion of waterproofness out the window if you get caught in a downpour, because that little port will be exposed. It’s also worth noting that if you choose to use the Premium Lens Guards, you can’t get to that USB-C door at all, because it’s locked in place by the Premium Lens Guards if you’ve secured them correctly on your unit.

All that said, the video quality is quite nice, and it’s beautiful to look at. I’m still working on developing some video editing skills, which I’m sure you’ll see in the video I’ll include here. I’m not a vlogger, and I didn’t try doing much in the way of static tripod shooting with the ONE X2, so I can’t tell you much about its suitability for that use. Mounting it on a motorcycle, or on your chest, helmet, or bicycle, there’s a lot of room for creative possibility here—as long as you aren’t planning to use audio straight from the camera.

It’s worth noting that since Insta360 sent us this camera for review, the company has released several updates to both its smartphone and desktop editing software. While full software suite reviews are way outside the scope of RideApart, the features, usability, and overall speed seem to have improved with each iteration—which is always encouraging to see. There’s a learning curve, of course—but you learn best by doing with something like this, and there are countless YouTube tutorials to help you along the way if it’s what you’re after. It’s also worth noting that there’s an Adobe Premiere plugin included in the Insta360 software suite, so you can get your clips together and then go edit a larger project in Premiere if you like.