how much is a selfie stick

He was a 9/11 first responder. Now, he's rescuing Ukrainians from war

As Ukrainian President Volodymyr Zelenskyy begged the U.S. Congress for help in defending Ukraine against a Russian assault, one American is already risking his life to save Ukrainians.

More than 3 million Ukrainians have fled their home as a result of Russia's war on Ukraine. But many are left behind, unable to safely evacuate, especially as Russian invaders target fleeing civilians.

Stern is the co-founder of Project Dynamo, a non-profit organization led by combat vets who travel to hostile regions around the world to rescue civilians. The veteran rescue group was originally founded in 2021, in an effort to save American civilians and US allies in Afghanistan after President Joe Biden ordered all US troops to withdraw from the country.

Related: How Ukraine is using social media to confront Russia in front of the world

Stern — a former US Army enlisted service member, former US Navy intelligence officer, and a 9/11 first responder on the morning of September 11, 2001 — arrived in Kyiv a week before the war broke out. A mere 90 minutes after the first Russian bomb fell, Project Dynamo was running their first rescue mission.

How American volunteers are helping the evacuation effort in Ukraine

Stern hadn't slept in days when TODAY Parents spoke with him from a safe house in Kyiv via Zoom. To date, Project Dynamo has completed 19 successful rescue missions. They're one of a small but devoted number of America groups helping people in Ukraine.

"We have kids on almost every run. Wouldn’t say every single (one), but the vast majority, because they’re families," Stern told TODAY. "And families come with kids." Since Russia's invasion of Ukraine, Project Dynamo has received over 14,000 requests for help from desperate Ukrainians.

Stern said that, so far, his team has safely evacuated American, Canadian, Polish, Dutch, and Ukrainian families from Kyiv. He has also rescued one Afghan family who fled from Afghanistan to Ukraine and who are now forced to flee Ukraine for somewhere else.

"It was kind of strange. Oddly, one of my guys is an Afghan-American and speaks Dari. So from a language barrier perspective, it wasn't an issue,” Stern said. "And you know, they were incredibly grateful. They're two-time evacuees."

Stern said the rescues are typically two-man operations, though there are times when a team member must go alone. A recent rescue mission to evacuate a person in a wheelchair was, as Stern described it, a "one-man show."

"I'm on about 90% of the operations, but Ukraine is a huge place so we kind of divide and conquer a little bit," he added.

The rescue missions are complex and fraught with peril, Stern said.

"We find them in Kyiv, and then bring them to one of our safe locations inside of Ukraine," he explained. "We bed down there usually for the night — sometimes a few hours, sometimes a night. It depends."

The journey the team must take in order to bring the evacuees to safety can take as long as 23 hours, and as short as 13 — a current Project Dynamo record.

Stern said they have a bus and a team on the other side of the border ready to receive the evacuees and take them to safe locations.

"(Then) we get them on buses and we go to Bucharest and they’re home free," he added.

Every evacuation is meaningful to Stern — the name and phone number of every person he has rescued is saved in his phone. One evacuation in particular, however, will always stay with him: The successful rescue of three premature infants, the team's youngest evacuees to date. He said it was “by far one of the most stressful things I’ve ever done in my life.”

"I think baby Sophie has got to be our youngest," he explained. "The twins were born on the 25th of February, and baby Sophie was born a day or two after them."

The team said yes to the risky mission for a number of reasons — the infants could have died if dust managed to infiltrate the NICU rooms, or the hospitals lost power, or there weren't enough doctors to care for them. The evacuation required Stern and his team travel to two separate children's hospitals: The twin newborns were more stable, so they were collected first.

Baby Sophie, who was much more fragile, was picked up afterwards. She was on a ventilator.

Related: Voicemails from Kyiv: Listen to one woman’s dispatches from a week in a war zone

"Premature babies are scary in the best of circumstances. When everything is good and they're in the NICU in Florida, it's still scary," he added. "So now let's put them in a war zone — really scary. And now let's evacuate them in a war zone — extra special scary. But the parents and I? We're bonded for life.' 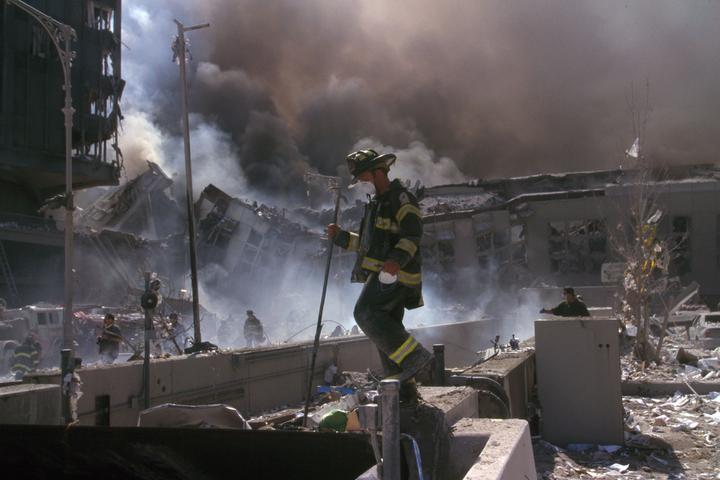 The infant extraction — code name "Operation Gemini" — required Stern to drive behind the ambulance transporting the babies. The convoy stopped only a few times for food, fuel, and to allow the doctors traveling in the ambulance with the infants to quickly check their vitals.

While Stern doesn't routinely evacuate premature infants, rescuing children is normal for Project Dynamo. A self-described "big kid" himself, Stern has a soft spot in his heart for children. He tries his best to "keep things light" during what are undeniably dangerous rescue missions, saying he relies on his "goofball" side to keep young children calm.

"Kids are kids, no matter where they’re from — we learned this through our Afghanistan operations," he said. "The big thing is kids feed off the stress of their mothers and fathers, so often the parents are scared and crying and, you know, obviously upset. So the kids often feed off of that. We do our best to help with that, but it’s very hard. We’ve evacuated people where their entire livelihood is whittled down to a shopping bag."

As the Russian onslaught on Ukraine continues, Stern said the war has become much more violent.

"We have emails that will make your blood curdle," he said. "It's medieval. (The Russians) choked off (Mariupol), they blew up all the bridges, and they're starving them out. And in the middle of starving them out, they're bombing them a lot — making a lot of holes in people, with no supply."

"The brutality is absolutely insane," he added.

Related: Russia ramps up attacks in Western Ukraine in brutal weekend of fighting

According to Ukrainian officials, Russian forces have been deliberately targeting civilian homes, schools, and hospitals. Ukrainian authorities believe at least 2,000 civilians have been killed, though that number is thought to be much, much higher. Those trapped in Mariupol have been burying the dead in mass graves.

"Our registrations for evacuations are definitely increasing," Stern said, after re-emerging from a bomb shelter after another shelling attack. "We've done things in Odessa. We're about to do something in Kharkiv. What we're seeing now is that (the operations) are a little bit smaller. Part of it is that a lot of people have left. Another reason for that is that a lot of people are scared, and they will not come out of their houses."

Stern shared that "in the beginning," people who were evacuatingdidn't know what the war was going to look like and didn't want to stick around to find out. Now, as Russia has bombed maternity wards and schools, people know exactly what the war looks like. Photos of deceased family members murdered by Russian troops and seen around the world confirms Ukrainians' worst fears — the terror is palpable.

"Now that it has become more violent and more real — and the noose is tightening around Kyiv — now you have people who are really, really worried," he added. "Everyone is afraid. Everyone is afraid of everything. There is a lot of artillery. A lot of missile strikes.All that stuff is designed to create fear, and it works — it's really scary to not know if a shell is going to land on top of you."

An increase in Russian violence comes with an increased risk for Stern and his team. Just yesterday, he was shelled by Russian troops during an afternoon operation.

"I was almost killed this afternoon," he said, following up his confession with a light-hearted "ha" and a crooked smile.

Still, he has no intention of leaving Ukraine. He cannot say when, or even if, he'll reach a point where the violence is so bad that he has to get himself to safety.

"I get asked this question a lot, and the answer is I don't know. I'm just trying to survive today," he explained. "I'm a strategic thinker from the perspective of, 'Where do I want to go? What do I want to do?' But I'm also not... I don't know. I struggle with this. It's so rewarding it's addicting. It's almost selfish."

Stern said his team pulled 19 people out of the war zone on Sunday, and the feeling that followed is the reason why he stays when, perhaps, most people would leave.

Stern is a volunteer — this is not his “job” and no one on his team is getting paid for their efforts. Turning dangerous evacuation missions into a sustainable business model is something Stern said they “haven’t figured out yet.” Project Dynamo is 100% donor funded, and relies on the generosity of others in order to successfully operate.

“You give us money, we do rescues — it’s just that easy,” he said. “Every dollar goes to an operation.”

The loss of sleep. The bombs. The shelling. The stressful operations saving the most helpless and most vulnerable. The lack of funds. The near-death experiences. It take an undeniable toll.

Yet Stern goes back, again and again, because, for him, there is no other choice.

"This is a humanitarian crisis on the scale of a natural disaster. This looks like Haiti after the earthquake. There are flattened buildings everywhere; there are people crying; people are dead; men, women and children are being shot up and bombed every single day," he explained. "So this is a pretty sizable, sizable disaster, you know? So, you know, why do I do it? It’s kind of like, how could I not? It’s like that."

Related: The story behind viral photo of strollers left for refugees at Polish border

As an Army and Navy vet, Stern said he has been "doing the nation's bidding" his entire adult life. For him, it doesn't matter if he's wearing a military uniform — he has a job to do, and he's going to get it done.

"Who is coming to help? The answer is organizations like Project Dynamo," Stern said. "We love it. It's the best work I've ever done. I've worked on things that they've made movies about, in my career."

That career includes multiple combat tours in over 50 countries, and a Purple Heart.

"I've been part of the most elite units in the military — all kinds of cool stuff. I've been blessed with an awesome career. And the last seven or eight months, without a doubt — between Afghanistan and Ukraine — have been the most rewarding of my career," he added. "There's no place I'd rather be than right here. No place. No place I'd rather be."

Buying an OLED Switch? A Screen Protector Is Essential