How to choose the best smartphone tripod in 2021

But much like when choosing other phone accessories – such as the best wireless charger or best portable charger – there’s a lot of choice out there. This article will guide you through the buying process – and help find the right tripod for you.

Our recommendations for the best smartphone tripod will be compatible with both iOS and Android handsets and will take into account a variety of factors, including the pricing and build quality – hopefully helping you take better photos in a snap.

What is a smartphone tripod?

Broadly, a smartphone tripod is a device that has three collapsible legs and a mount at the top to hold your handset in a fixed position. Some models will have bendable legs that are able to wrap around other objects, such as a tree branch or street light – but typically, they will be made of a sturdier material like plastic or aluminium.

These days tripods are no longer only used by professional photographers equipped with pricey DSLR cameras or for taking awkward annual school portraits.

There is now a multitude of smartphones with impressive lenses, low light modes, AI enhancements and high megapixel counts. While not many can compete with a DSLR when compared head-on, smartphones such as the new Apple iPhone 13, Huawei’s P-series range and Google’s Pixel line-up will take stunning pictures.

How to choose the best smartphone tripod

Buying a new smartphone tripod is not as difficult or confusing as buying a phone itself or techy items like the best outdoor projector or best Apple iPad accessories.

The tripods are all fairly similar – and for the most part, will do the same job. But just because there’s not as much technology working behind the scenes doesn’t mean there aren’t some factors to consider before adding the product to your basket and tapping buy. Here are the main aspects to think about before that point:

Budget:Like all tech purchases, how much money you have to spend should be the first way of narrowing down your initial search results. Stick to it – there are options to meet all budgets – even the more basic tripod is better than none at all.

Looks:If it’s something you are carrying around a lot – you want the tripod to look decent. Have a think about aesthetics. Many tripods are plastic and coloured black, but some will come in silver aluminium or have bendable foam-padded legs.

Compatibility: Most phone tripods are universal – with the top mount able to change the sides to fit any size of handset – be it Android or iOS. But others may be able to work with other devices, too, for example, a light digital camera or a GoPro. In some cases, this may require you to buy an additional mount adapter, however.

Function: Check how the tripod folds up – if the legs snap tight against each other, the tripod can possibly double as a rudimentary form of gimble. We would advise against buying selfie sticks that also work as a tripod. While we don’t doubt some good products exist, many will be flimsy and poor at proper image stabilisation. 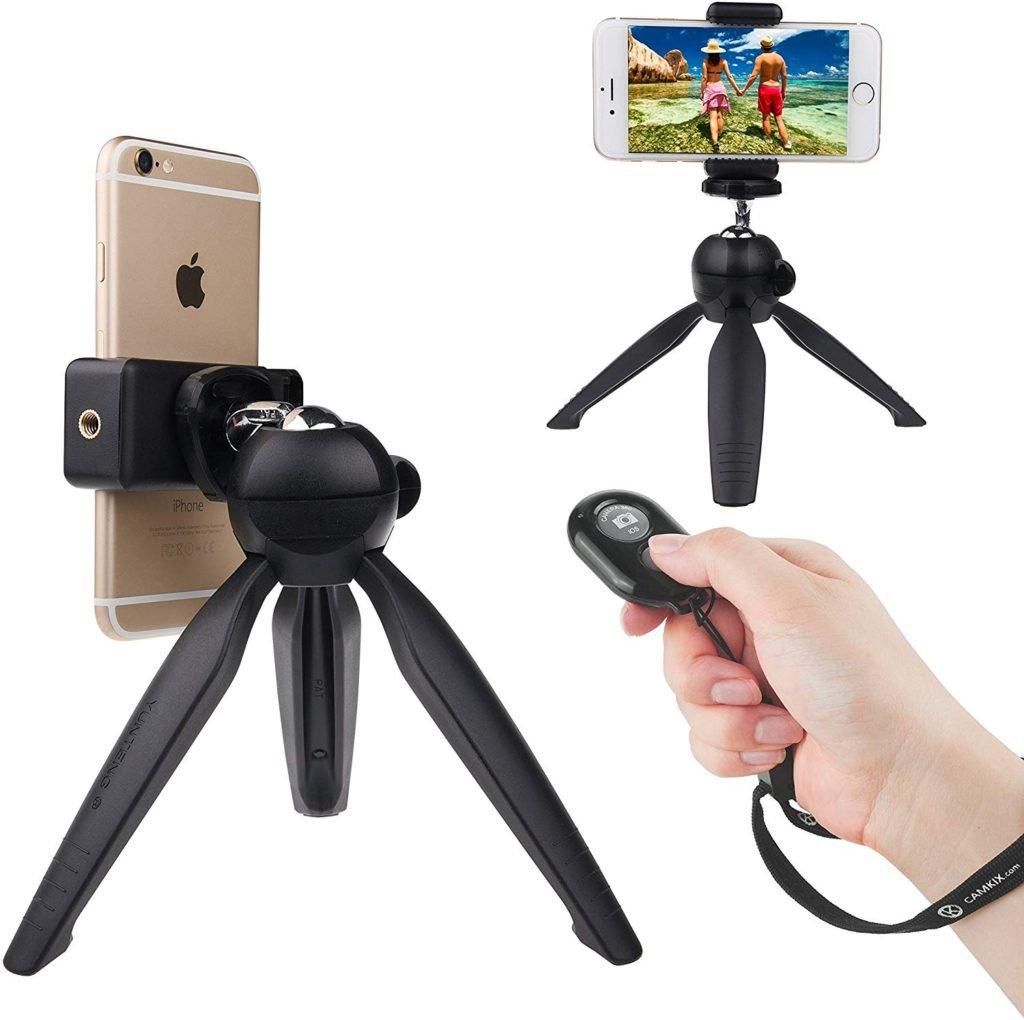 Extendibility: While some tripods with longer extendable legs can be used outside when taking pictures or videos, others will only have short legs intended to be sat on a desk or table. Others will have flexible legs, so determine which suits you best.

The Everesta smartphone tripod is a fantastic all-rounder that is compatible with all types of handsets and even some of the lighter DSLR cameras via a standard 1/4 screw top. It comes with a Bluetooth remote control that connects with both iOS and Android phones up to 30 feet away and extends to 1.06 meters in total. At less than £20, it’s great value for money too – and is packaged with the universal holder.

This ultra-portable Manfrotto smartphone tripod comes in at just 26 cm in length and is made from a matte black stainless steel - making it perfect if you need a tripod to have in your bag, backpack or pocket. The legs do not extend, but it fits nicely on a flat surface but can also double as a grip if they are closed together. While there are other small tripods on the list, the Manfrotto’s form factor makes it the best option if portability is your main reason for needing a new tripod that’s easy to transport.

The OASMU phone tripod comes in two sizes, but both are under £12. That makes it a great choice for anyone on a budget. While affordability may be the biggest selling point, the flexible rubber legs make it a fantastic option for anyone who loves taking pictures of videos outside. The legs can sit in a typical desk stance but can also be moulded around any object – be it bicycle handlebars or a tree branch. This means you can get some unique angles to your snaps. It’s great value – but functional.

Joby tripods are popular with content creators – and it’s easy to see why. The unique ball-shaped design and bendy legs make it a versatile piece of smartphone kit – so it works well for recording video in all formats - from vlogs to timelapses. The GripTight model is small enough to pop in your pocket, and the holder fits all smartphones.

It’s not the only tripod on this list that will be a good option for travelling, but the Soft Digits model earns points for ultra-flexible legs that are coated in rubber – meaning they have more water protection than some rivals. The legs can be wrapped around objects or curled up against themselves to use as a type of handle for your phone while taking pictures or video. Priced at under £20, it also comes with an adapter for a GoPro and a wireless remote that takes photos from up to 10 meters away.

It’s not an option for anyone on a tighter budget, but if durability and build quality are your big priorities for a tripod, then one option is to pair the Neewer Portable Desktop Mini Tripod (£57.99 RRP) with the Neewer Smartphone Holder Bracket (£13.99). It’s an aluminium alloy desk tripod with feet that extend slightly – giving a total length of 50 cm. The metallic design is sleek, and it has rubber feet that reduce slipping. Unfortunately, as there is no smartphone holder packaged with it, you need to pay extra money for the mount adapter that attaches to the standard 1/4-inch screw top.

If you want versatility, the K&F Concept tripod could be the one for you. It’s a three-leg model that not only sits in the transitional stance but the middle section can be detached – instantly turning it into a monopod. With an aluminium body, those legs can extend to 70-inches, and it boasts a 3-way pan head that can turn 360 degrees. A hand grip on the side of the tripod itself means it’s also convenient to carry, and the phone mount – bundled with the tripod – stretches between 1.9 to 3.9 inches.

The Linkcool tripod is affordable, lightweight and portable – making it a solid choice if you need a tripod for your smartphone that’s under £20. For that price point, you will not be getting the sturdiest legs or most premium build quality, but the Linkcool does have a lot going for it: it’s compatible with phones, DSLRs and GoPros and has decent extendibility – going from a desk-friendly 14 inches up to 42 inches. It also comes bundled with a Bluetooth remote for taking your pictures from a distance. There are two colours available – black and silver – and it has a 360-degree ball head.

For the latest news, reviews and deals, check out the RadioTimes.com Technology section.