where are selfie sticks banned

Japan has a complex relationship with YouTubers. On the one hand, it’s constantly among the top of professions that children aspire to be. But on the other hand, people hate them.

Especially in a country where people value being able to ride in silence even on trains, having a nice moment interrupted by someone filming themselves to post on the Internet is seen as particularly selfish and annoying.

Which is why one popular Kyoto ramen shop, Ginjo Ramen Kubota, has decided to put a stop to it in the most blunt way possible:

▼ In the interest of customers being able to eat in peace, YouTubers have been banned. (Translation below)

“Concerning YouTubers Coming to Our Shop

Recently, people have come to our shop saying, “I’m a YouTuber. I’m going to take some videos.” But from here on, we are banning them from coming to our shop.

To put it bluntly, it’s kind of gross and uncomfortable to come in during business hours and just start taking videos, and it it bothers the other customers too. We will not allow them in from now on.”

Well it doesn’t get more straightforward than that!

The shop doesn’t go into more detail than that tweet, but based on the clear-cut wording we’d have to imagine that they were pushed to the edge by several incidents. Due to the fact that they’re a well-known ramen shop in Kyoto, this could be something they had to deal with nearly daily.

Also, while they’re specifically calling out YouTubers here, it’s probably safe to assume that the ban applies to livestreaming to Twitch and other platforms too.

Overall, most other netizens seemed to agree with their take on banning YouTubers:

▼ “A YouTuber came when I was eating. They didn’t shut up and I was anxious that I might be filmed. It used to be a place I could enjoy my food in peace.”

▼ “As an adult they should know to get permission in advance. Way too many of them mistakenly think that exposure on their channel makes it okay.”

▼ “Your no-nonsense stance on this is praiseworthy.” 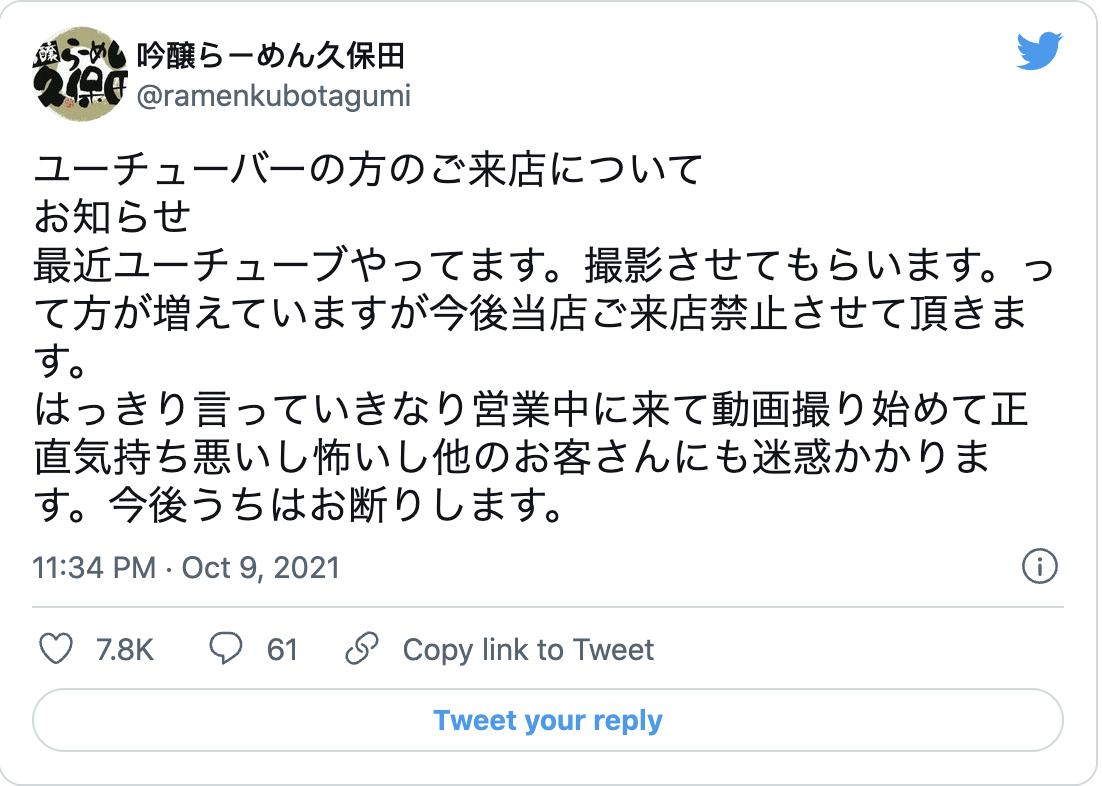 Many others agreed that the shop’s policy was not only great, but the way they put it out there was equally good:

“LOL at how straight you’re telling it. Other customers hate them, so lock them out!”

“I feel like this might entice them to create ‘I Went to the Anti-YouTuber Ramen Shop’ videos.”

“Be sure to set up an exorbitantly high filming fee for any of them that do film without permission.”

“If you’re not at the YouTuber level of Hikakin, then you’re a waste of time for these shops.”

“Well, I know what ramen shop I want to go to.”

“I don’t want to be in anyone’s YouTube video. I applaud what you’re doing here!”

“Feels like a lot of the YouTubers don’t understand that the TV shows where someone just barges into a restaurant are actually planned in advance.”

While there were a few voices saying that the policy is unfortunate for the decent YouTubers who do ask for permission in advance, they understand where the shop is coming from.

Although as others pointed out, the shop should probably prepare for an onslaught of people who are going to want to make prank video content by “accidentally” leaving their phones recording inside or something.

Maybe the shop can add a new item to the menu: “Leftover YouTuber Smartphone Ramen.”