Aside from the Moto G100 (RRP £449) and the modern interpretation of the Razr flip phone (RRP £1,199.99), most of its devices fall into the affordable price bracket. Now, Motorola’s premium family is growing thanks to new Edge smartphones.

The trio, which lacks their predecessors’ curved displays, was unveiled at a virtual showcase on 29th July and will become available "in the coming weeks." Motorola heavily pitched the phones as having better photo-taking capabilities than ever, with the Pro model also having an impressive 144Hz refresh rate – a rare treat.

Here’s what we know about the Motorola Edge 20 series so far:

The Edge 20 Pro, which runs on Android 11, is the most expensive smartphone in the new line-up, and it has the high-end specs to back up the premium price point – at least on paper. The Pro has a 6.7-inch OLED display, a 144Hz adaptive refresh rate for ultra-smooth scrolling and a Qualcomm Snapdragon 870 chipset.

It has 5G connectivity, while the 4500mAh battery should easily power the device for a full day. Even better: the company’s TurboPower 30 charger will reportedly give you nine hours of power in 10 minutes. Now that’s something we want to test. 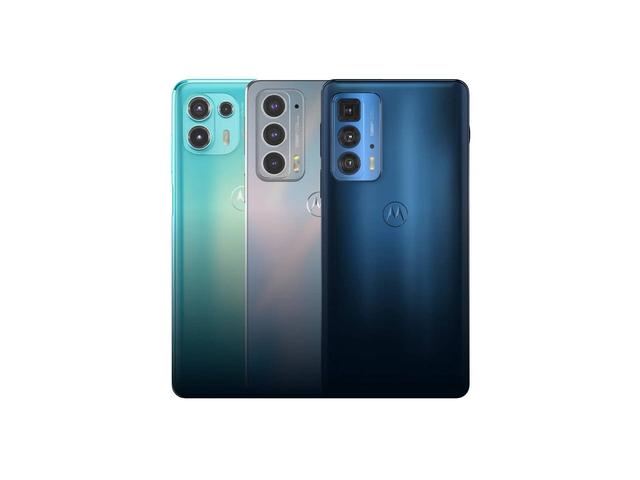 The Edge Pro has a triple-camera setup, with a 108 megapixel (MP) main lens, an 8MP telephoto lens and a 16MP ultra-wide angle lens. The selfie cam is 32MP. The Pro comes in three colours: Midnight Blue, Iridescent White and Blue Vegan Leather.

Like all three of the phones, the Edge 20 has a 6.7-inch OLED display and a 144Hz adaptive refresh rate. It is being pitched as one of the thinnest 5G smartphones on the market today – coming in at 6.99mm. For a quick comparison, the iPhone 12 is 7.4 mm, and the Samsung S21 5G is 7.9 mm. The camera system is the same as the Pro model, but instead, it has a 3x telephoto lens. The chip is also different, with a slightly less efficient Snapdragon 778G processor, and the 4,000 mAh battery isn’t quite as good as the Pro – but should still be more than enough for most users. The Edge 20 comes in three colours: Frosted Grey, Frosted White, Frosted Emerald.

Despite being a “lite” version in the new series, the smartphone retains a 6.7-inch OLED display, which is great to see. The primary camera remains just as good on paper, too, at 108MP – although it lacks a telephoto lens, and the ultra-wide is half the pixel count than its siblings (8MP.) Still, the Edge 20 Lite also has 5G, is more affordable and has a better 5,000 mAh battery that should provide around two days of power. It comes in two colours: Electric Graphite and Lagoon Green.In a move that’s not too surprising for a lite model, the refresh rate is capped to 90 Hz.

The Edge 20 Pro will be available in the coming weeks via O2, Vodafone, Carphone Warehouse, Currys, iD Mobile, Amazon and John Lewis, from £649.99.

The Edge 20 will become available in the coming weeks via Carphone Warehouse, Currys, iD Mobile, Tesco, Amazon and John Lewis, starting from £429.99.

The Motorola Edge 20 Lite will be available in the coming weeks via Vodafone, EE, Carphone Warehouse, Currys, iD Mobile, Amazon and John Lewis, at £299.99.

Hopefully, we will get some testing time with the new series, so be sure to stick with RadioTimes.com for a full review.

Our expert testing team has had plenty of hands-on experience with Motorola’s devices, so if you want to read more about existing phones, don’t miss our Moto G 5G Plus review, Motorola Moto G30 review and Motorola Moto G50 review.

The previous Motorola Edge (5G) model, which has a 6.7-inch OLED display and a 64 MP triple camera system, is currently available on Amazon for £536.66.

For the latest news, reviews and deals, check out the RadioTimes.com Technology section. Want a new phone and not sure what to buy? Read our guide to the best Motorola phones, and read our full breakdown of the best Android phone.

After 2 Years of Pandemic Life, Turn Toward Normalcy Is a Shake-Up